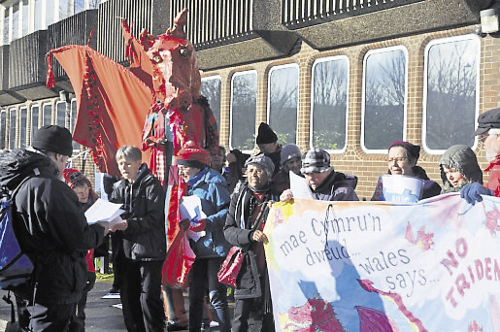 Around 30 people plus a red dragon, with musical accompaniment by Côr Cochion, Côr Gobaith and a trombone, demonstrated outside Merthyr Tydfil magistrates court on 3 February. What was it all about?

A group of Knighton residents are aiming to initiate a private prosecution against the UK secretary of state for defence for conspiring to commit a war crime. They are alleging that the deployment of Trident, the UK’s nuclear weapon system, is a crime.

In November, the group wrote to Michael Fallon asking him to sign a declaration on behalf of the government that it would fully comply with humanitarian law in relation to its nuclear weapons.

Deeming his response unsatisfactory, the group prepared a ‘criminal information’ – a collection of witness statements and other prima facie evidence relating to the allegation – and handed the documents to the Merthyr Tydfil court to start the process of summonsing the defence minister to answer the charges. Angie Zelter explained:

‘The UK’s refusal over the last 45 years to disarm its nuclear arsenal has undermined the Non-Proliferation Treaty and encouraged more nations to acquire nuclear weapons. There are now nine nuclear weapon states and a dangerous new nuclear arms race is under way. The present Trident system – and any replacement – could never be used in accordance with international law, and it is time for our allegations to be judged by an impartial UK court. The lies and obfuscations of the nuclear weapon policies need to be examined and revealed in all their horror. This is why we are going to court.’

Merthyr Tydfil court subsequently refused to act on behalf of the Knighton group and advised the group to apply to the attorney general directly, which they have duly done. Other groups across England and Wales have taken similar action. Watch this space!