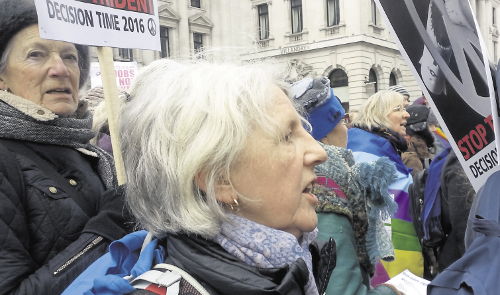 Three of us pensioners set off from Aberbanc at 5.15 in the morning of 27 March to meet up with a coach full of fellow protesters in Swansea for the Anti-Trident demo in London.

We made new contacts and shared networks on the journey up and back from London, always an important part of the overall occasion.

Luckily, the rain held off and, even though a cold wind blew, the people, old and young together, sang, danced and chanted in a very comradely and cheerful way.

Being part of a 60,000+ demo warmed the spirit and hearts of everyone there. Speakers from diverse political and religious positions all delivered important and meaningful speeches, which were well received by the overflowing audience in Trafalgar Square.

A great day where the people showed, yet again, the importance of peace and justice in these troubled times. I hope that we continue the campaign against the use of nuclear and other weapons of mass destruction. We have won the argument; now let’s get rid of Trident!