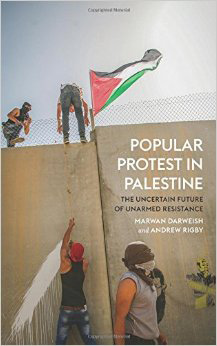 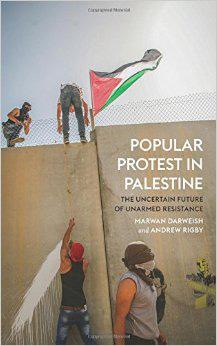 This analysis of Palestinian popular – civil – resistance to the creation and expansion of Israel and its nearly 50-year occupation of Palestinian territory, is essential reading for anyone wishing to gain a deeper understanding of the dynamics of civil resistance in an occupied country, and the factors making for its success or failure.

“The First Intifada encompassed a range of nonviolent tactics with the strategic aim of regenerating the resistance, increasing the cost to Israel of the continued occupation, and seeking allies both within Israel and internationally”

The account covers the efforts to prevent mass Jewish immigration with the objective of creating a Jewish state or homeland in Palestine from the 1880s when it was still part of the Ottoman empire, through the period of British military rule (1917–1920) and the British ‘mandate’ (1920–1948), and the continued Palestinian resistance following the creation of Israel.

During the Ottoman period, resistance to Jewish immigration took mainly the form of petitions and delegations to Constantinople. There were also some more coercive measures, including pressure on landowners to stop them selling land to Jewish immigrants. But the remonstrations and low-level resistance did not succeed in halting the immigration, and the Jewish population of Palestine more than tripled between 1882 and 1914, rising from 24,000 to 84,000.

The occupation of Palestine by British and allied forces in 1917 during the First World War raised Palestinian hopes that the situation would change. Hussein, the sharif of Mecca, provided forces in 1916 to fight alongside Britain and was given to understand that as a reward Britain would recognize the Arab nationalist goal of independence.

Unbeknown to Hussein, Britain and France had already agreed a secret deal – the Sykes-Picot agreement – to divide up control of the Middle East between them. Then, in 1917, Britain committed itself in the Balfour Declaration to supporting the creation of a Jewish homeland, though with the proviso that this did not impinge on the rights of other communities in the area.

The proviso underscores the ambiguity of the term ‘homeland’. Not everyone in the Zionist movement saw it as entailing the creation of a separate Jewish state. Thus, the eminent Jewish philosopher and humanist, Martin Buber, and the group he was associated with, Brit Shalom (Covenant of Peace), called for a bi-national state with all citizens enjoying equal rights.

Jewish immigration increased during both the British military administration and the mandate, reaching a peak of 60,000 in 1935, and sparking serious unrest and clashes between the two communities, with killings and the destruction of property on both sides.

The unrest culminated in the major Palestinian revolt of 1936–1939. Initially that was mainly unarmed, and employed the gamut of nonviolent tactics, including a general strike. A commission of enquiry into the strike, headed by Lord Peel, proposed the partition of the territory between Jews and Arabs, which eventually formed the basis of the post-Second World War partition and the creation of the state of Israel, endorsed by the UN.

The establishment of the state of Israel, in May 1948, was accompanied by the forcible expulsion or flight of the majority of the Palestinian population, who became refugees in the West Bank, the Gaza Strip, and neighbouring Arab countries. It occasioned also the first Arab-Israel war, when Egyptian, Syrian and Jordanian forces invaded in an attempt to prevent the new state from coming into existence.

The truce in January 1949 which halted the war left a substantial number of Palestinians on the Israeli side of the armistice line – the ‘Green Line’ – who were subject to severe restrictions under Israeli military rule between 1948 and 1966, including being required to have a permit to leave their town or village. They nevertheless improvised forms of low-key unarmed resistance calculated to challenge various restrictions without unleashing an Israeli crackdown. Gradually the scope of the resistance broadened, particularly following the end of military rule in 1966, when the Arab population became Israeli citizens, albeit still circumscribed by many restrictions. This chapter is particularly interesting in that it shows how such low-key semi-resistance in a situation of severe repression can open the way to public protest, defiance and political mobilisation.

The Palestine Liberation Organization (PLO), founded in 1964, placed its faith in ‘armed struggle’, but popular unarmed resistance re-emerged in the Occupied Palestinian Territories (OPT) with the First Intifada – literally shaking off – from December 1987 to October 1991. It began with riots in the Gaza Strip but developed into a sustained campaign of mainly unarmed resistance coordinated not by the PLO, which had moved its headquarters to Tunis, but by a newly-formed Unified National Command based in the OPT, on which the various political tendencies were represented and which was sustained by a network of popular committees.

The intifada encompassed a range of nonviolent tactics with the strategic aim of regenerating the resistance, increasing the cost to Israel of the continued occupation, and seeking allies both within Israel and internationally. The high point came over Christmas and the New Year, 1990–1991 when thousands of peace activists from around the world joined Palestinians and Israelis in demonstrations in Jerusalem under the banner ‘Time for Peace’.

The start of the Oslo Peace Process in 1993 brought a brief period of hope. But the absence of substantial progress towards a two-state solution led to Palestinian disillusion, internal divisions and the strengthening of the Islamic group Hamas.

A Second Intifada in 2000 took a mainly violent form, including suicide bombings and indiscriminate rocket attacks on Israel. This provoked, or at least provided the rationale for, the devastating Israeli bombing and shelling of Gaza in a succession of military operations, and the building of the Separation Wall.

This last development has led to a resurgence of popular resistance, which, together with the Boycott, Divestment and Sanctions campaign initiated by Palestinian civil society groups in 2005, provides some grounds for hope. So, although the authors are pessimistic about the prospects of a breakthrough in the short to medium term, they suggest in the final chapter that it is perhaps time ‘to abandon narrow conceptions of rationality/realism and engage in some optimism of the imagination.’

They are particularly encouraged by the determination and resilience of a younger generation of Palestinians, as exemplified by the Gaza Youth Breakout group who were inspired by the overthrow of Mubarak in Egypt in 2011, and, at least in the case of one of its founder members, by the example of Gandhi and Nelson Mandela. Their manifesto reads in part:

Fuck Hamas, Fuck Fatah, Fuck UN, Fuck UNWRA, Fuck USA! We, the youth in Gaza are so fed up with Israel, Hamas, the occupation, the violations of human rights and the indifference of the international community! …

We will start by destroying the occupation that surrounds ourselves, we will break free from this mental incarceration and regain our dignity and self respect. We will carry our heads high even though we will face resistance. We will work day and night to change these miserable conditions we are living under. We will build dreams where we meet walls.

Michael Randle is, with April Carter and Howard Clark, co-editor of A Guide to Civil Resistance: A Bibliography of People Power and Nonviolent Protest, (Merlin, 2014)