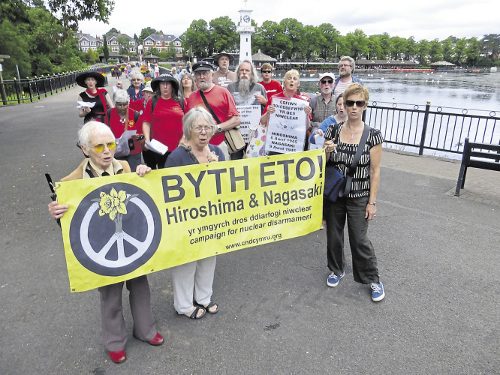 In South Wales, the 70th anniversary of the bombings of Hiroshima and Nagasaki was marked with two vigils. A large crowd including members of the Women’s International League for Peace and Freedom (WILPF) and CND Cymru gathered by Tredegar Park lake in Newport Gwent. They heard Paul Flynn, MP for Newport West, a message of solidarity from Hiroshima, readings, and songs from Frankie Armstrong and Côr Cochion.

Cardiff’s annual remembrance at Roath Park Lake was also well attended. A procession with banners and posters walked slowly from the clock-tower to the waterside, and threw petals in memory of the hundreds of thousands of innocent victims of the nuclear age.

Remembering the obscenity of the attack on Japan’s civilian population, speakers highlighted the gross folly of renewing Trident nuclear missiles, costing an estimated £100 billion, at a time of economic hardship.

Those present were reminded that: ‘Nagasaki, like Hiroshima, is now a peace city, pledged to the mission of world peace. There is hope in this – that the two epicentres of such horrific devastation and suffering 70 years ago, are now epicentres of peace.’

The message resounded loud and clear from both vigils: ‘Byth eto! Never again!’