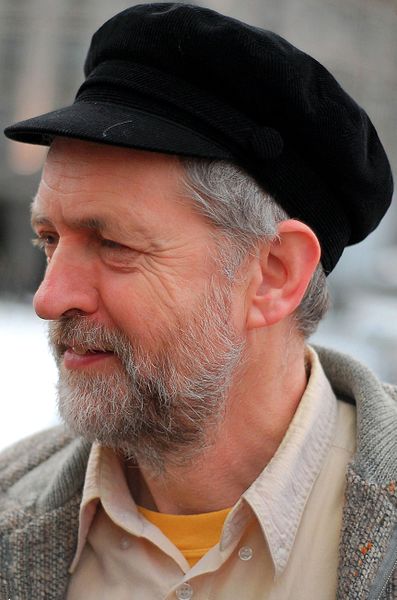 As the Guardian noted, Jeremy Corbyn’s landslide victory on 12 September in the Labour leadership contest was ‘one of the most stunning electoral upsets of postwar politics.’ Billed at 200-1 by bookmakers when he entered the race in June, the Islington North MP won 59 percent of the vote, giving him ‘the biggest party mandate for any political leader in UK political history’, according to the Guardian’s chief political correspondent.

What makes Corbyn’s victory so extraordinary is that he trounced the three other candidates despite the whole of the media and political establishment – including the Guardian, which backed Yvette Cooper MP – mobilising in opposition to his growing popularity.

“Corbyn’s election as Labour leader is a huge opportunity for the peace movement.”

Importantly, many of Corbyn’s political positions and interests are closely aligned with Peace News and its readers. He has been a passionate supporter of nonviolent protest and nonviolent solutions to conflict. As a vice-chair of CND, he opposes Trident nuclear weapons and NATO. Currently chair of the Stop the War Coalition, he has opposed all Britain’s recent major wars – the Falklands in 1982, the 1991 Gulf War, Kosovo in 1999, the invasion of Afghanistan in 2001, Iraq in 2003, and Libya and Syria in 2013. A patron of the Palestine Solidarity Campaign, Corbyn is a long-time critic of Israel’s occupation of Palestine.

Corbyn has also opposed the government’s austerity programme that has been battering the poorest and most vulnerable members of society since 2010. He is a long-term supporter of anti-racism campaigns and the environmental movement (he opposes the expansion of Heathrow) and he supports animal rights (he is a vegetarian).

It is likely that even in opposition a Corbyn-led Labour Party will open up space for many of these issues to be debated on the national stage – something peace activists will be able to take advantage of. Indeed, even before he was elected leader, Corbyn’s meteoric campaign was already influencing government policy, with the Guardian reporting that prime minister David Cameron would abandon plans to extend UK airstrikes to Syria if Corbyn was elected as leader.

Though many media commentators have dismissed Corbyn as a hard-left 1980s throwback who has no chance of winning a general election, some senior political figures are taking his rise more seriously.

In an little-noticed interview with the Huffington Post, former Conservative chancellor Ken Clarke warned: ‘Don’t underestimate Jeremy Corbyn… It’s not certain he will lose an election… If you have another recession or if the Conservative government becomes very unpopular, he could win.’ Likewise, the media onslaught against Corbyn itself strongly suggests significant sections of the establishment see him as a real threat to their interests.

“A Corbyn-led Labour party is still an unreconstructed pro-growth party.”

This anti-Corbyn campaign will escalate sharply now he has been elected leader. Concerted opposition to Corbyn will not only come from the media and the Tories, but also from large numbers of Labour MPs who do not share Corbyn’s politics. And if Corbyn cannot be brought to heel by the British establishment, then it is likely that international finance, multinational corporations and US-UK ‘defence’ interests keen to protect the so-called ‘special relationship’ will work to undermine his leadership.

Considering this hostile political landscape, if Corbyn’s leadership is to achieve any significant progressive change it will require what former US presidential hopeful John Edwards called an ‘epic fight’ with the entrenched ruling class. It is therefore essential the movement the Corbyn leadership campaign has engendered – the Morning Star reported that 50,000 people attended his campaign events, with 16,000 volunteering – is massively expanded and activated to become the largest mass mobilisation in British history. Activist and journalist Owen Jones has argued for a mass registration drive to reach the 33 percent of adults who didn’t vote in the last general election to greatly expand the electorate.

Peace activists should mobilise in support of Corbyn for a number of reasons.

First, a mass grassroots movement is the best – arguably only – defence against the unrelenting attacks that will be made against Corybn.

Second, Corbyn’s leadership is opposed by large sections of the parliamentary Labour party, some of which will likely try to overthrow him. Popular pressure on Labour MPs will reduce the space they have to operate in and discourage any attempts to plot against Corbyn.

Third, a mass movement is essential to apply pressure on Corbyn’s leadership team itself – to make sure it implements the policies that Corbyn campaigned and won on. For example, during his campaign he seemed to backtrack on his previous calls for Britain to leave NATO. Likewise, in early September, the Telegraph quoted Corbyn’s closest advisors as saying they planned to put the issue of Trident renewal on the “back-burner” to avoid a fatal split in the party.

Finally, a mass movement is needed to apply pressure to push Corbyn’s Labour party to support more radical, necessary, policies. On climate change, Corbyn’s pledge to create one million new climate jobs is welcome (see PN 2584-2585). Less welcome was his announcement, reported by the Newcastle-based Chronicle, that he wanted to re-open coal mines to burn so-called clean coal (an idea derided by most environmentalists).

More broadly the Green Party’s Rupert Read recently noted that a Corbyn-led Labour party is still ‘an unreconstructed pro-growth party.’ This will need to change if the UK is going to play its part in countering catastrophic climate change. Ideas popular among radical activists such as a land value tax, Citizen’s Income and drug policy reform should all be raised during the policy debate that will happen under Corbyn’s leadership.

The writer Dan Hind and broad-based organisations including Compass, the Green Party and Open Democracy are also calling for Corbyn to support a constitutional convention that could consider reformation of the UK’s archaic voting system (to introduce proportional representation?), the house of lords, the future of the monarchy, and further devolution.

Corbyn himself will gain considerable strength if he makes alliances, including electoral alliances, with the SNP, Greens, Plaid Cymru, NGOs and grassroots activists, coalescing around the constitutional convention and issues such as those mentioned above.

The size, power and tactical intelligence of this mass movement will likely be the deciding factors in whether Corbyn survives as leader, the extent to which he holds firm on his political positions, his Labour party’s level of influence on British politics in opposition, and his chances of being elected as prime minister. As the US historian Howard Zinn wrote during the 2008 US presidential election: ‘Even when there is a “better” candidate, that difference will not mean anything unless the power of the people asserts itself in ways that the occupant of the White House will find it dangerous to ignore.’

Corbyn’s election as Labour leader is a huge opportunity for the peace movement. And a huge responsibility too. His leadership likely represents what Peace News’s Gabriel Carlyle calls ‘a special time in British politics: a brief window of opportunity’ – a short period of time when temporarily discombobulated power relations mean significant victories can be won.

The establishment, of course, will try to shut down or curb Corbyn’s relatively radical agenda as quickly as possible. If they succeed, they will do everything they can to make sure such a surge of democracy never happens again. These extraordinary times, then, could be the only chance to push for and win significant change for the foreseeable future. Is the peace movement up to the challenge?

Ian Sinclair is the author of The March that Shook Blair, published by Peace News.