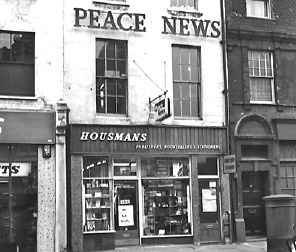 PN reported on the Old Bailey conspiracy trial of 14 pacifists and anti-militarists – many with PN links – accused in connection with the leafleting of soldiers.

‘I shall have to have a medical report on you if you’re not careful.’

Exchange between judge and defendant at the opening of the trial.

The trial of the 14 people charged with conspiracy to incite disaffection began on September 29, with a valiant attempt to get the conspiracy charges thrown out.

The main argument was that one could not conspire to attempt something (the word ‘attempt’ being included in the 1934 Incitement to Disaffection Act itself); either one attempted something or conspired to do it. The prosecutor explained that if he had brought all the substantive charges he could have done under the 1934 Act, they would have added up to 20 years [of possible imprisonment] anyway. So they might as well have it all in a lump with a conspiracy charge (or words to that effect). The Judge agreed....

September 27-28 was a ‘weekend of action’ to gain publicity for the beginning of the trial on the Monday. [In London, on Saturday] 150 people formed a poster parade and moved to the Home Office. Here the petition organised by the Peace Studies people in Bradford was handed in by Peter Hain and Bruce Kent, while everybody else sang Conspiracy Songs... copies of the Incitement to Disaffection Act were burnt...

Supporters in other countries also showed their solidarity. Copies of ‘Some Information for Discontented Soldiers’ [a leaflet at the centre of the trial] were distributed [at British army bases] in West Germany... and in West Berlin, where three leafleters were arrested. In Belgium, [campaigners] gave leaflets to British soldiers stationed there. Pickets were held all over Europe outside British Embassies and Consulates... In Strasbourg, [local activists] gave out leaflets at the European Parliament.

In the USA, 39 ‘movement celebrities’ (Noam Chomsky, Phil Berrigan, Liz McAlister, Barbara Deming...) signed an open letter... which was delivered to the British Embassy in Washington and the British UN Mission in New York. Support actions also took place in San Francisco and Los Angeles, and in Honolulu members of Catholic Action picketed the offices of British Airways.

From the cover and news pages of the 10 October 1975 issue of Peace News. Buried Treasure is compiled by Albert Beale, author of Against All War: fifty years of Peace News 1936–1986.