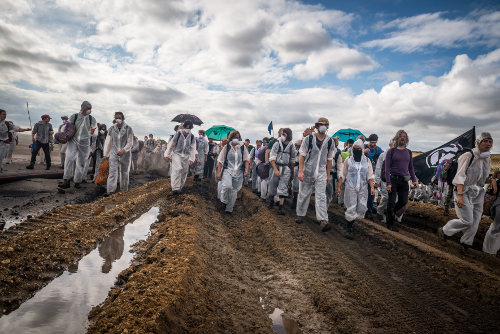 Do you want to be part of a rising movement for climate justice and a Just Transition to a decarbonised economy? The UN summit on climate change (COP21) is coming to Paris in December and mobilisations are gaining momentum.

PN is now offering trainings for people interested in taking take part in creative direct action in response to COP21. These workshops are informed by a training given in Paris in September by the global climate justice group, 350.org.

A coalition of over 100 organisations and grassroots movements is organising a day of ‘mass civil disobedience against the root causes of the climate crisis’ in Paris on 12 December (D12), the day after the climate negotiations are scheduled to finish.

COP21 is widely anticipated to fail to agree the actions needed to address the climate crisis. In particular, the negotiations are not expected to reach agreement on the need to rapidly end the extraction and and burning of fossil fuels.

Environmental groups are keen to avoid a repetition of the aftermath of the 2009 Copenhagen negotiations, which dealt a devastating blow to the global climate movement.

350.0rg, which has affiliated organisations and campaigns in 188 countries, has said 2016 will see ‘a global wave of historic national and continent-wide mobilisations targeting fossil fuel projects, and backing the energy solutions that will take their place’. There will be a ‘bold act of escalation’ in April.

During COP21, there will be the world’s largest nonviolent civil disobedience direct action adventure game in the streets of Paris, in cyberspace and beyond.

In a previous Climate Games in Amsterdam in July, teams could compete for awards including the ‘Trophy for Supportive Play’ (awarded to the group which best shows the spirit of solidarity – perhaps with another team).

There was a legal team offering support, and a place for people who just wanted to come and cheer on those who were playing the ‘game’.

Get in touch if you have a group of six or more people who are interested in forming an affinity group for creative direct action for climate justice in Paris (or in the UK), and you’d like a training/briefing from us.

An affinity group needs support people in it as well as people willing to risk arrest. Support means media work, legal support and other essential roles.

From the PN point of view, all we need is travel costs, a meal, and somewhere to stay the night.