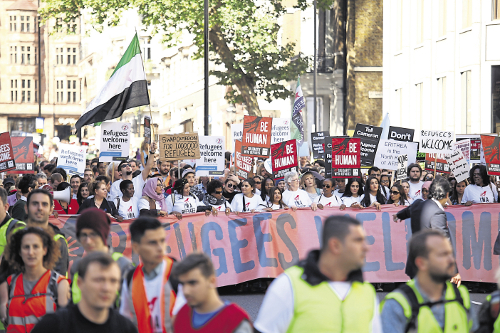 Previously an investigative journalist in Africa, Almamy is now a human rights activist and a caseworker with HOPE Projects in Birmingham (he manages directly nine houses for destitute asylum-seekers and refugees). As PN spoke to him, Almamy was organising a demonstration in Birmingham calling for an amnesty for asylum seekers and migrants already in the UK.

Almamy said he had ‘mixed feelings’ about the refugee crisis, which has been defined as a Syrian crisis. ‘There are people who are in this country who have the same criteria [as the Syrian refugees], they have fled a warzone, and they have been here for years in limbo. Nothing has been done to positively help their lives.’ The government says it is welcoming Syrians, but isn’t clear about how: they won’t get asylum straight away, so this will only be ‘creating more backlog of cases’ when the bureaucracy can’t deal with the cases they have already.

So, on the one hand, there is ‘government incompetence in dealing with asylum seekers and refugees who are already here’.

On the other hand, ‘We need to welcome people who are in need, wherever they are from, whether they are Mongolians or Syrians. The government should stop talking “divide and rule”. We are not talking about economic migrants here, we are talking about people in need of a place of safety.’

Almamy added: ‘Western countries support dictatorships in other countries. They help leaders to steal a lot of money, and hide that money in European banks, which means their people cannot have a life and so they have to leave to find a better life somewhere.

‘Our organisation [Project Hope] has been contacted by hundreds of British people offering spare rooms, volunteering, really keen to do something, [wanting to be] physically involved in helping these people, relieve the suffering of these people.’

Coventry Asylum-seekers and Refugees Action Group (CARAG) is ‘mostly made up of people with experience of the Asylum and Immigration system in the UK. We have come together to share our experiences, support each other, and speak out for rights and dignity in the UK.’

Joan Proctor, who was born in the Caribbean and who has lived in many countries including in Africa, moved to Coventry from Canada 10 years ago. She told PN about CARAG, which started ‘two years ago’. ‘We meet on Wednesdays, sometimes we have about 30, mostly men, from everwhere you could think of.’

‘We had about six or seven people, it evolved. It’s causing some financial problems as we give [members who are asylum-seekers] bus fares [to the meetings]. We’re not a charity, it’s difficult to form a constitution with a group like that; people move around, they move to another city because they’re waiting for a decision from the home office. Many of the group don’t speak English, we need a translator. [There is simultaneous translation into Arabic and Farsi at meetings.] They’re not that interested in a constitution!’

Members of the group are sometimes accompanied to the doctor or other appointments. Joan spoke to PN just after supporting an asylum-seeker at the opticians: ‘I tell them: You’ve got as much right to be here as any one else. You come from a country that has been colonialised by Britain. Britain has gained from colonialism.’