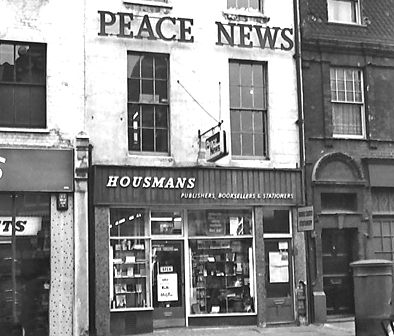 The letters pages in Peace News have long been a forum for debate on pacifist ideas: the August 1955 issues were no exception. Sid Parker, individualist anarchist, contributed to and edited political publications over many decades; pacifist Denis Barritt lived in Northern Ireland - including during “the troubles” - opposing all armies, ‘legal’ or ‘illegal’.

There is one paragraph [of a Peace Pledge Union document in a previous PN] with which I cannot agree:

‘Physical force is a necessary element of all government; therefore, to be logical, a pacifist should be an anarchist, but life is more than logic, and pacifists must needs take part in public affairs.’

That life is more than logic is obvious, since without living human beings there would be no logic. But to deduce that, because the pacifist must take part in public affairs, they cannot be logical and be an anarchist, shows a confused understanding of the anarchist position.

Another necessary element of all government is the delegation of authority – ie giving [people] the power to make laws and to enforce them by the coercion of the state machinery. As a result, the affairs of the public... become not ‘public affairs’ but politicians’ affairs. The more powerful a government becomes, the less the public have to say in ‘their’ affairs.... In a decentralised system any delegation that was necessary would be of a purely functional character and would carry no coercive power whatsoever.

The ‘wave of pacifism’

The ‘wave of pacifism’ in the thirties was equated [in a radio documentary] with the PPU; these ‘well-meaning’ people were trying to obtain an insurance policy against wars without payment of premiums.... There is a salutary reminder here that our audiences before the war did consist of many such folk. Can our 120,000 signatories have thought through the [PPU] ‘pledge’ to its final conclusion – or the war would not have decimated our numbers....

The pacifist answer is not ‘peace at any price’ but ‘love at all costs’... If some of us sigh for the days when we could fill the Albert Hall, we must remember that such support was not pacifism.