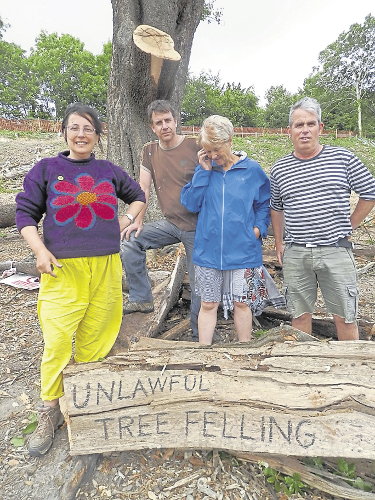 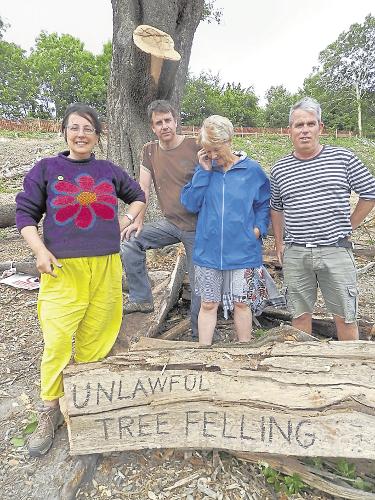 On 7 July, the Hastings anti-roads group Combe Haven Defenders received an urgent message on our Facebook page: a big tree was being chopped down in Hollington Valley. I immediately jumped in a taxi, headed to the site, and sat under the tree.

The tree-fellers had to stop work, the police were called, and thus began a five-hour standoff.

The planned fate of this particular tree – a large holm oak – was determined by the chancellor, George Osborne, in 2012, when – under the influence of Hastings MP, Amber Rudd (now secretary of state for climate change) – he gave East Sussex county council £56m to build the Bexhill-Hastings Link Road.

The road was low-value, high-carbon, high-destruction, but that didn’t matter: Amber Rudd – a woman who never saw a new road she didn’t love – wanted her road, and she got it.

The road, we were told, would not only relieve traffic congestion, it would also create 3,000 new jobs. What we weren’t told was that these supposed new jobs would be created by building business parks and hoping new employers would move into them.

One of the new roads, the £15m Queensway Gateway (QGR) was to run right through the middle of Hollington Valley local wildlife site, a tucked-away little spot in the north of the town.

Described in its site designation report as ‘invaluable and irreplaceable’, the valley had ancient woodland, meadows and wet woodland around a stream running from a spring. It supported protected species including dormice and bats, and was described in its report as ‘one of the best wildlife habitats in the borough’.

But all this richness was irrelevant: the land was needed for a road and business park. Hollington Valley had to be sacrificed on the altar of growth and jobs – even if the evidence suggested that those jobs were likely to never materialise.

We started to visit the site regularly and got to know some of the people who used it. Lots of dogwalkers, of course, but also men living and working at the homeless charity Emmaus, which runs a shop next to the site. They would often come out after work, sitting under the trees and enjoying the greenness and quiet. That SeaChange could be allowed to turn this magical place into a road and business park was unthinkable.

We tried to up the ante, to make more people aware of what could be lost. In December, we held a tree-dressing event, decorating one of the huge oaks at the top of the valley and the little elder that stood next to it. In January, a few of us braved the cold to camp out under the same tree, waking to find the valley covered in a layer of snow. The police came round to see what we were doing, and one of them obligingly took photos for us.

Almost 500 people objected to the planning application, but the planning committee was unmoved. One or two voiced minor concerns, but all were united in believing that the road was vital to the town. After 10 minutes’ ‘debate’ (actually, councillors falling over each other to say what a wonderful thing it would be), the application was passed unanimously. 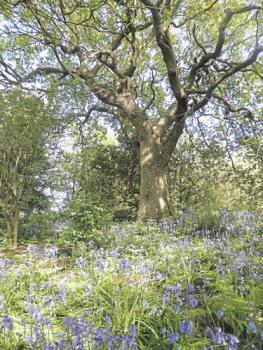 Almost immediately, Gabriel Carlyle, a local resident (and PN promotions worker), consulted a specialist environmental lawyer. The latter pored over the planning application and found that the road, if built, would contravene national and EU laws on air pollution. A judicial review (JR) was launched to get the planning permission quashed.

In the meantime – knowing that the JR was in progress – SeaChange wasted no time in chopping down a huge swathe of trees across the valley, right at the start of the nesting season. We tried to stop them, but the police were called, people were shoved around, and arrests were threatened.

Within a couple of days, hundreds of trees were felled and Hollington Valley was left looking like a battlefield. I sat on the trunk of the magnificent oak we had decorated the previous December and howled with rage and sadness.

A couple of months later, Hastings council caved in, admitted that the planning permission for the building of the road had been passed unlawfully, and revoked it.

SeaChange’s own documents showed that the road, if built, would cause serious breaches of air pollution legislation, both in Hollington Valley and in residential properties nearby. SeaChange failed to offer any mitigation for the pollution, merely noting that it would be monitored.

The council should have noted this failure and refused planning permission. In fact, it was barely mentioned in the report to the planning committee, and not raised at all as an issue in the meeting at which the application was decided.

In the original felling operation, SeaChange had left two large trees standing, as they contained bat roosts. Now, on 7 July, even though SeaChange no longer had planning permission, they ordered contractors to chop down those trees. That’s why I found myself sitting under one of them in the rain, frantically calling anyone I could think of who might come and join me.

The police arrived and told us we were committing aggravated trespass.

Gabriel’s lawyer wasn’t answering his phone, but eventually I tracked him down. ‘They can’t do that,’ he said, and immediately rang SeaChange’s lawyer to protest. In the meantime, the police were circling, and the tree-fellers had put a line of tape around the tree – usually a preliminary to being told to leave the area or be arrested.

At the last minute, the lawyer secured an agreement from SeaChange that they wouldn’t cut down the trees unless and until they got planning permission again. The tree-fellers and the police departed, and we were left sitting under the tree, stunned at our victory.

Of course, the fight isn’t over. A new planning application is being prepared. It’s hard to see how they’ll get round the issue of air pollution, but they’re desperate to build this road, and we won’t be surprised to see some dirty tricks. Watch this space.