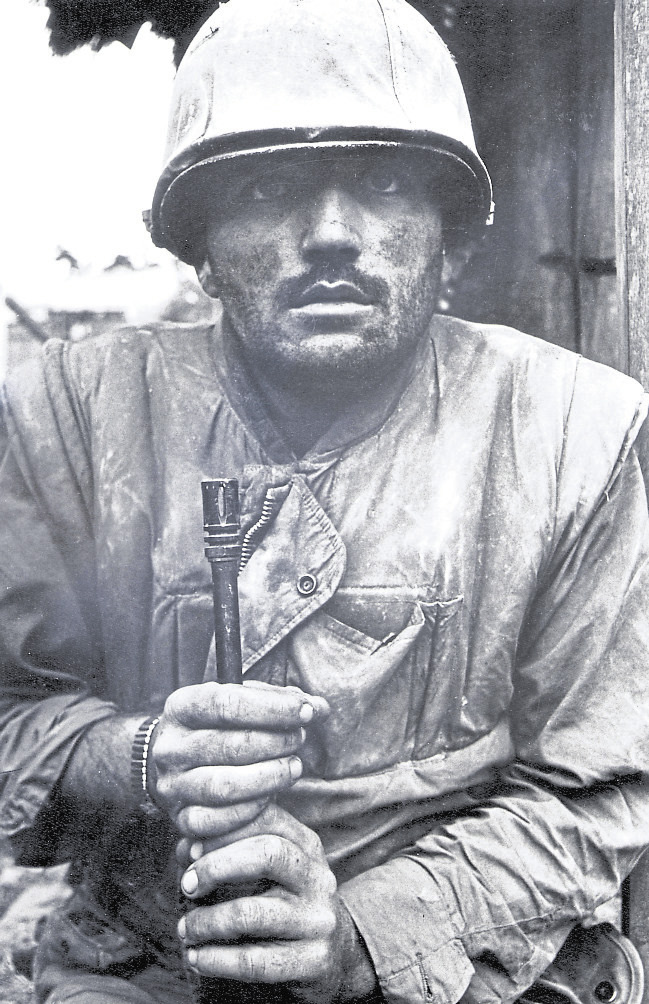 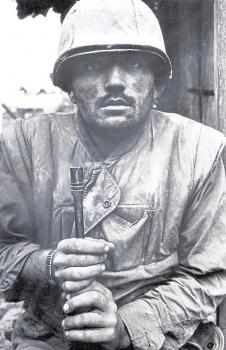 ‘Did you enjoy the show?’ asked the woman in the Tate Modern bookshop, whilst I purchased a copy of the Conflict, Time, Photography catalogue.

‘Enjoy’ wasn’t the verb on the tip of my tongue as I stood at the counter, but I did find the exhibition moving, thought-provoking, challenging, exhausting and, despite the subject matter, very beautiful. I hope this review will encourage you to visit the show, read the book or – at the very least – spend some time looking at and listening to the excellent website resources.

The exhibition begins and ends with quotes from Kurt Vonnegut, Jr written large across the walls. These firmly anchor the intention of the show as a commemoration of human loss rather than a celebration of war. Many of the photographs within the show made me feel sad, or angry, or both. It was essential to return to thoughts of peace.

This show is the Tate’s commemoration of 100 years since the start of the First World War, but more than that, it is a comprehensive record of photography as a tool to document, commemorate and interpret the aftermath of war.

The earliest photographs on show are Roger Fenton’s The Valley of the Shadow of Death 1854–5 (from the Crimean War) and George N Barnard’s prints from 1866, which track the route of general Sherman’s march through the Confederate States of America two years earlier.

Simon Baker, the curator, has taken a refreshing approach to chronology by ordering the exhibition by the length of time between the conflict and when the photographs were taken. Not surprisingly, the first galleries – ‘Moments Later’ – have the most immediate impact.

Moments Later: ‘The Press Conference, June 9, 2008, The Day Nobody Died’ 2008 © Adam Broomberg & Oliver Chanarin. This image is a section from a six-metre length of photographic paper which was exposed to the sun for 20 seconds

As well as the images reproduced here, there are two enormous and moving pictures of Iraq and Afghanistan by Dutch photographer Luc Delahaye. Delahaye has worked in conflict zones for 15 years, but has rejected conventional reportage in favour of taking images with a large-format camera – producing a ‘bigger picture’ in more ways than one.

I think that Don McCullin’s image of the shell-shocked soldier is key to this exhibition, and of particular interest to Peace News readers. He intended the photograph as an anti-war image, but now wonders whether it has become so iconic that it has lost its meaning – I disagree!

McCullin also reminds us that in 1968, photojournalists were free to photograph what they wanted – and images like this were important in turning public opinion against war. Now, journalists are ‘embedded’ within the invading/peacekeeping troops and where they go and what they can take photographs of is carefully controlled. 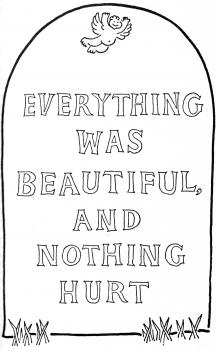 The scope of the exhibition is enormous: the ruins of Dresden and Reims; brave,angry and sad documentation of Hiroshima and Nagasaki; obsessive chronicles of car bombs in Beirut, and scenes of political violence in Gaddafi’s Libya; beautiful landscapes in Angola, and chronicles of the scarred deserts in Kuwait.

My main criticism of the show is that the labelling and signposting is too minimal. While I appreciate that ‘a picture is worth a thousand words’, when you are wandering around an exhibition which includes the work of more than 50 exhibitors and more than 1,000 images, you need some context.

Apart from the giant-sized Vonnegut quotes at the beginning and end, the labelling is restricted to short passages on A4 panels at the beginning of each new collection of images. This means that there is often a crowd of visitors jostling and squinting to get a glimpse of the unnecessarily-small type.

I am not usually an audio guide-evangelist, but if you have a smartphone, I seriously recommend taking a pair of headphones with you and using the free audio guide.

My other recommendation is make a day of it. Avoid being overwhelmed by having a break to look at some paintings, or have a cup of tea and contemplate the Thames. This is not a show to be missed, but it is not one that can be taken lightly.

Everything was beautiful but it still hurt

An exhibition within the exhibition: The Archive of Modern Conflict 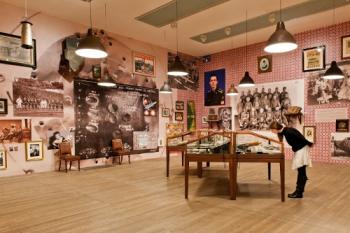 Conflict, Time, Photography is essentially a curated exhibition made up of smaller exhibitions, each photographer exploring their own way to ‘bear witness’ to a historical conflict. Nearly all the photographers have chosen to use traditional ways of exhibiting photographic images in frames on the wall.

The major exception to the rule is The Archive of Modern Conflict’s installation, with the uninviting name of ‘A Guide for the Protection of the Public in Peacetime’. After the succession of formal galleries, it is a shock to enter this darkened room where memorabilia of conflict and empire have been assembled into a three-dimensional collage. It is like entering a Boy’s Own comic book interpretation of war.

The display is intended to challenge our preconceptions about war, memory and collective amnesia. There are few labels and you are warned not to believe the ‘facts’ you read. This is a playful exploration of the ‘Theatre of War’. Sitting strangely within the formal gallery spaces, the room can easily appear facetious, but deserves a closer look.