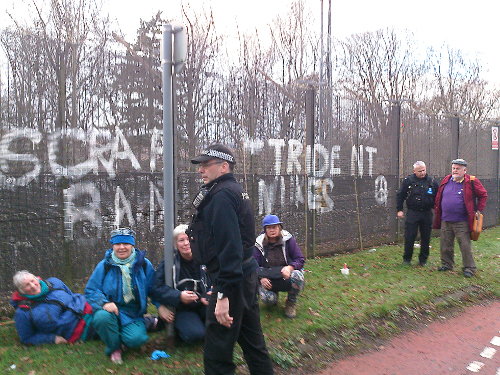 On 17 December, five Trident Ploughshares activists painted ‘Scrap Trident, Ban Nukes’ onto the fence around the Faslane nuclear base north of Glasgow. Mary Millington, Gillian Lawrence, Janet Fenton, Barbara Maver and Brian Quail (left to right) were the campaigners taking on Britain’s only nuclear weapons base, home to the UK’s four Trident nuclear submarines. The Scrap Trident coalition is planning a demonstration in Glasgow on 4 April, and a ‘Big Blockade’ of Faslane on 13 April. Photo: Trident Ploughshares