Weaving our own web 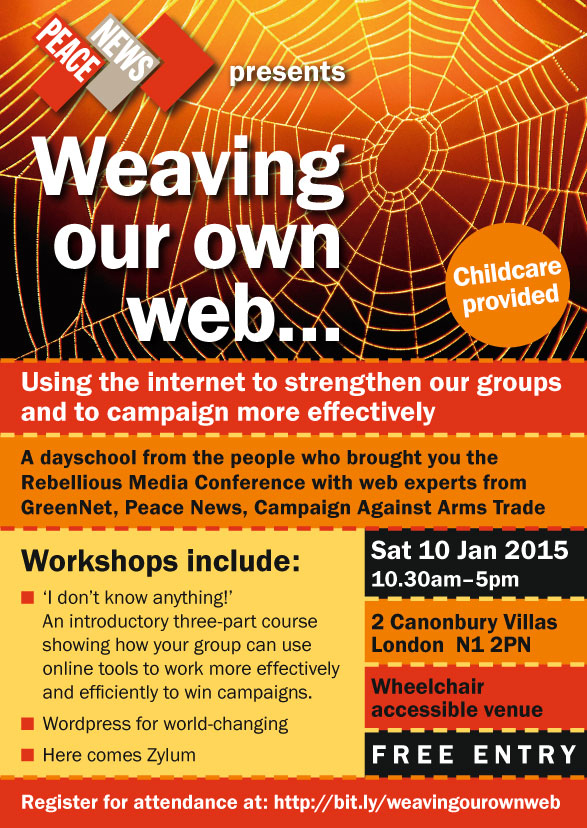 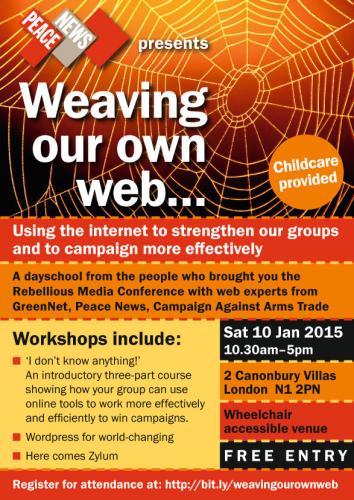 Over 80 people crowded into Peace News’s successful ‘Weaving Our Own Web’ dayschool in Islington, London, on 10 January, to learn how we can use the internet more effectively in our campaigning for peace and justice. We had really great feedback from people (see box).

We achieved our main goal of drawing in people across the spectrum – people at the early stages of learning about digital tools, as well as folk with moderate abilities and the technically-advanced. We had quite an even spread of abilities, judging by the attendance at different workshops and the evaluation forms that were filled in. We had introductory workshops; ‘Ask a techie’ sessions with the GreenNet Gurus; and more advanced and philosophical bits.

There was also a session on countering internet harassment from within the movement, run by a London feminist; and an introduction to social media run by Peace News Trustee Jon Nott and PN promotions worker Gabriel Carlyle (our speaker Nishma Doshi was ill, sadly).

I don’t know anything!

Zylum is aimed primarily at groups and individuals with less technical confidence and experience, and the dayschool was put on largely to introduce Zylum to a larger audience, so bringing in folk at the earlier stages of learning about using the internet was an important goal for the day.

That meant we were really pleased when someone wrote about the day as a whole in their evaluation form: ‘It gave me confidence as it was not aimed at techies, but was pitched at a beginners/fearful level’.

“A day not aimed at techies, but pitched at a beginners/fearful level!”

Our sense is that most internet- or computer-related events for campaigners and activists cater for the most-technologically-literate and -able. We’d flagged up that this event was different by saying in advance that there would be a three-part course during the day called ‘I don’t know anything!’ We weren’t sure how many people would come to this bit – in the end, there were a dozen people in each of the three sessions.

In the first session (‘the basics’), we ended up talking about anti-virus software and firewalls, and we shared some ideas on how to make strong (memorable) passwords:

The other two ‘I don’t know anything!’ sessions were about using the internet to communicate within the group; and communicating with people outside your group (the public, decision-makers and so on). We’ll share ideas from these and other sessions on the PN website.

Zylum offers the ability to create simple but good-looking websites really easily (if you can use wordprocessing software like Word, you can create a website). It also includes a very easy way to add a box to your website to gathers supporters’ email addresses.

Many activists who have a little more technical knowledge or confidence use the Wordpress blogging system to create a site (though it’s not as easy to gather people’s email addresses automatically).

By my reckoning, the most popular part of Weaving Our Own Web was ‘Win with WordPress’, a two-part workshop led by Kirk Jackson of Campaign Against Arms Trade that seemed to have about 20 people in it each time.

Kirk’s top tip is that free WordPress hosting for grassroots campaigns is provided by: www.network23.org;  www.noflag.org.uk and www.noblogs.org.

Part of the agenda for the day revolved around threats from corporations and the state, with a practical privacy tools workshop from Webarchitects, and a related workshop by Autistici/Inventati.

A/I, which is based in Italy, had their servers in Norway ‘cloned’ by the local police in 2010, at the request of Italian police searching for information on two people. The personal information of 7,000 users was stolen in this operation.

Bombo of A/I wrote after the dayschool that the conflict over online security and digital rights (privacy, freedom of expression and so on) is ‘not just a technological race between cops/corporations and hackers (who spies on who, who shares/leaks what)’. These issues need to be addressed as political claims by a wider public than just hacktivists, he argues, given how pervasive digital activities have become in our lives.

Bombo urges activist communities to remember Indymedia and ‘give value to their online places – instead of giving their value to a corporate social network (facebook)’ – by linking to each other and being reachable from a common starting point.

The best-loved element of the day was the (vegan, gluten-free, subsidised) food! Lunch scored 8.9 out of 10, while the venue got 8.2 and the workshops 7.5. How the day was run was quite highly rated also at 7.6. (There is no score for childcare as no one asked for this, despite us flagging up the option in all the publicity.)

What I liked: ‘Great idea to organise today, so *thank you* – chance to network with loads of activists and learn new IT skills for campaigning, that catered for all different levels + lotsa ideas + creativity shared + lots of inspiring support too + skillsharing. Fab.’ ‘Meeting people – getting together. Venue. Thank you!! Mix of ages.’ ‘Fantastic event that brought together a diversity of people who inspired each other!’ (Favourite comment under this heading coming up – eds) ‘Feeling other people were not necessarily better informed than me.’

What could be improved: ‘More events of this kind in future, please!’ ‘Documentation handouts. More female technical experts.’ ‘Introduction to the day at the beginning didn’t invite questions to understand the sessions. Having a fluent demonstration of actually doing *one* thing, or one of these applications, eg loading an image and sending it to a list.’ ‘More case studies.’ ‘More signposting within the event.’ ‘Feel that some workshop leaders need better briefing on facilitation and allowing quieter contributors equal access, especially anyone with communication needs/disabilities.’

My thoughts on Zylum: ‘Zylum is very good. I am glad it has so few bells + whistles. The Help paragraphs look simple + are short. I was wary + expected to be confused + hopeless but my confidence has gone up + I now feel I could tackle it.’ ‘Needs work.’ ‘Good introduction for new small groups, organisations’. ‘Looks really useful – hope to use for our campaign email list. Not enough time in w/shop to explore unfort[unately]. But got lots of ideas to go away + explore.’ ‘Clear, simple, lovely – worried about moving all stuff + security.’

One thing I learned: ‘About Zylum + how it can really help our campaign, as alternative to the more complex Riseup or Mailchimp.’ ‘Facebook may not be the answer.’ ‘To follow 2,000 Twitter people!’ ‘To get people to come to your social media (Facebook, Twitter, whatever) you have to keep using it yourself. It only attracts people if it’s active, even if it’s just postings of “small” observations.’

Other comments: ‘Confident I will be able to use what I have learnt.’ ‘Some of w/shops either too basic (not much I learned) or too complex – lots of acronyms + assumptions about knowledge + not very ? friendly (eg security one). Plan of rooms was confusing, sorry, plan on the wall was difficult to follow + see clearly where workshops were being held. But to end on a posi note this was a great day + thanks to all for organising!’ ‘Maybe have another one for beginners.’ ‘I also have gained confidence to look at Riseup email lists because the workshop told me I don’t have to worry about all the functions it’s got – I can just use the bits I want + not worry about the rest.’

Weaving Our Own Web was organised by Benjamin and by PN co-editor Milan Rai, with lots of work by lots of people, especially Jon Lockwood. Peace News is glad to acknowledge crucial support for the dayschool from the Joseph Rowntree Charitable Trust and from our host venue, Greenpeace UK. We’d like to thank Will McCallum of Greenpeace in particular for going above and beyond the call of duty to help us!