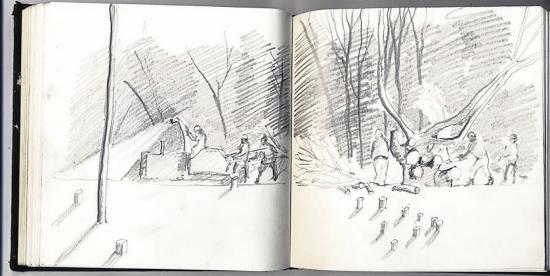 In 2015, I went with Peace News’ Emily Johns to the Hastings home of John Shaw, director of SeaChange, the ‘not for profit economic development company’ for East Sussex.

SeaChange – a private company – has been given millions of pounds of public money to ‘regenerate’ Hastings.

This ‘regeneration’ has included building the Bexhill-Hastings Link Road in the teeth of fierce local opposition (see PN 2658).

Emily and I had come from the site of SeaChange’s latest project, the Queensway Gateway road – another unnecessary road, this one driven right through the middle of a nature reserve.

The Hollington Valley Site of Nature Conservation Importance had been a little green oasis, with tall oaks, bluebells in the spring, a huge holm oak with roosting bats, a fantastic habitat for wildlife and a green lung for locals.

Then SeaChange had come in and massacred the ancient oaks, ripped out the scrub with its dormouse population, felled the bat tree and turned the nature reserve into a wasteland.

SeaChange was set up in 2011 in order to be a vehicle for pulling regeneration funds from central government into the local area.

It inherited the assets and staff of a previous similar company called SeaSpace, which was also tasked with ‘regenerating’ Hastings.

While nobody could dispute that Hastings was – and remains – a town with many problems (not least very high levels of poverty), nobody ever seemed to pause to consider whether building roads and business parks was going to do anything to lessen those problems.

The agenda has always been: build big shiny things and every other good thing will follow.

He didn’t show up at so-called ‘community consultation’ events.

He didn’t answer his emails.

He was, in short, the invisible man.

When Emily knocked on his door that day in 2015, she wanted to tell him how she felt about the destruction of Hollington Valley.

The woman who answered the door said John Shaw didn’t live there.

A couple of days later, Emily was visited at home by two large policemen who sat in her front room and told her that under no circumstances should she go looking for John Shaw.

So we learnt that he may be invisible, but John Shaw can summon the police to do his bidding.

On another occasion, Peace News’ Gabriel Carlyle went with a friend to one of the regular Bexhill-Hastings Link Road exhibitions.

It seemed a good chance to put SeaChange on the spot, so Gabriel and Anthony turned up with their video camera and a list of questions – how much was the road really going to cost, when could we expect the thousands of jobs we’d been promised, what about the environmental damage?

When they tried to ask the SeaChange representative these questions, he refused to answer, then fled to the toilet and called the police.

The key thing that’s struck me over the years is the utter lack of accountability of SeaChange.

As a private company, it’s not subject to any kind of public scrutiny. More than that, though, Shaw and his staff go out of their way to remain below the radar. Perhaps that’s why Seachangewatch, the organisation I set up to monitor the activities of SeaChange, has got gratifyingly far under Shaw’s skin.

In 2017, the BBC made a programme about the opposition to SeaChange in Hastings. John Shaw was happy to expound on the great benefits his new road would bring. But then the interviewer asked him about Seachangewatch.

Shaw reacted by waving his hands in front of his face as if swatting a wasp, then walked off camera in the middle of the interview. To their credit, the BBC broadcast his ignominious exit.

Given the secretive nature of the company and its staff, my primary aim in starting Seachangewatch was to try to dig out more information on this dodgy company.

I wanted to shine a light on the activities of a company which was sucking up tens of millions of pounds of public money to build business parks and roads, and yet which almost nobody in Hastings had heard of, far less been consulted about.

Freedom of Information requests to the company were out of the question, but there had to be another way of rooting out what was really going on.

So I set to work, setting up a website and learning more than is perhaps healthy about Local Enterprise Partnerships – of which more in a future article.

As I worked, I knew for sure that, if nothing else, I was being pretty successful at getting up John Shaw’s nose. That in itself almost made the whole thing worthwhile.