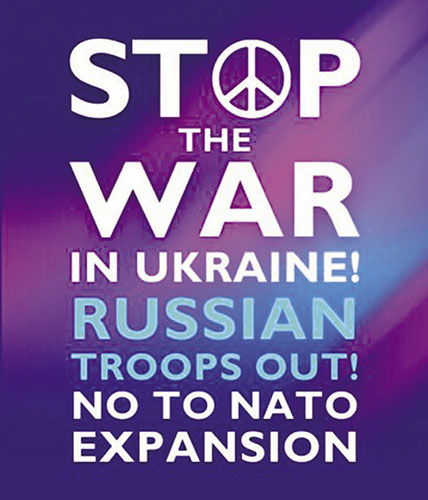 Towards the end of March, a new British anti-war statement appeared online. Unlike the two main anti-war groups in the UK, ‘No War on Ukraine’ does not mention NATO expansion as a factor in the Ukraine crisis.

The Campaign for Nuclear Disarmament (CND) and the Stop the War Coalition are part of the international ‘Peace in Ukraine’ coalition which organised the global day of action against the war in Ukraine on 6 March.

Members include US groups such as CODEPINK, Food Not Bombs and Pax Christi USA.

All these groups around the world acted under the same three slogans: ‘Stop the war in Ukraine! Russian troops out! No to NATO expansion!’ (see graphic, right)

They acknowledge that NATO accepting Eastern European countries as members – in breach of promises NATO leaders made in 1990 – has contributed to the present crisis to some extent.

‘This appeal was drafted after some informal discussion among anti-war activists, concerned at the small size of the anti-war protests against Russia’s invasion of Ukraine. It aims to establish the central principles around which the broadest possible anti-war activity can be built.

‘Massive demonstrations against war and in solidarity with the Ukrainian people all over Europe have not so far been matched in the UK, where protests have been small and often divided. We appeal to the entire Labour and trade union movement, pacifists, faith leaders, humanitarians, antiwar activists, those in solidarity with the Ukrainian people and all right-minded internationalists to build the broadest possible movement around three central demands: Russian troops out of Ukraine! No to war! Refugees welcome here!’