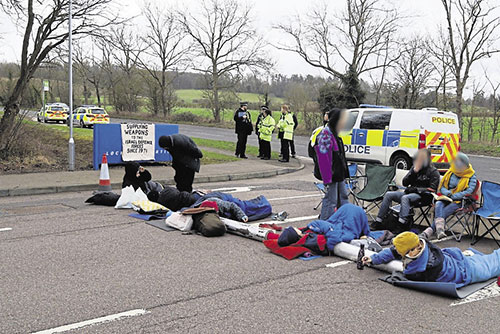 A Block Lockheed lock-on closes the main gate to Lockheed Martin UK’s factory in Bedfordshire, 7 March. Faces have been blurred by the group. PHOTO: BLOCK LOCKHEED

Block Lockheed shut down the access road to the factory by locking-on across it at 5.30am.

The activists remained in position until the afternoon as the police stood by.

The blockaders unfurled banners which accused the company of crimes against humanity and highlighted the similarity between the Russian invasion of Ukraine and Saudi Arabia attacking Yemen using weapons sold by Lockheed.

The protesters claimed that their protest was particularly important in view of what was happening in Ukraine.

This followed their first action, on 28 February, spraying ‘WMD’ and ‘Stop War’ on signs around the 64-acre Lockheed Martin UK arms manufacturing site.

A Block Lockheed lock-on closes the main gate to Lockheed Martin UK’s factory in Bedfordshire, 7 March. Faces have been blurred by the group. PHOTO: BLOCK LOCKHEED