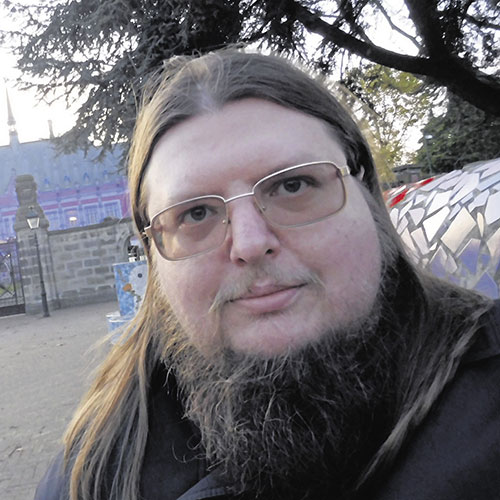 The most visible face of Ukrainian nonviolence during this crisis has been Yurii Sheliazhenko, the executive secretary of the Ukrainian Pacifist Movement and a board member of the European Bureau for Conscientious Objection. We’ve collected together some of the statements Yurii has made over the past six weeks.

Let me introduce myself. My name is Yurii Sheliazhenko. I live in Kyiv, capital of Ukraine and the horrible thing is that my home shaked several times after explosions nearby because of Russian missile attacks.

You can ask why I didn’t leave an unsafe city turned into a battlefield. It is because our president, [Volodymyr] Zelenskyy, tries to make all men soldiers and order us to kill Russians.

We are prohibited from leaving Ukraine and I might be mobilised to [join the] army against my will if I try to travel – even inside the country, not to say outside.

It is because I am a Ukrainian pacifist which means I believe that war is a wrong thing – because it is wrong to kill people.

I will not go against my conscience even under threat of punishment, of five years of prison.

I believe that people should talk instead of killing each other.

From Yurii’s interview on Democracy Now! on 16 February, eight days before the Russian invasion:

... The escalation towards major war in Ukraine is unnecessary.

Our government became part of it when we recklessly took side of the West in global power struggle. And instead, we should be neutral country. We should commit to universal peace.

People of Ukraine, as well as all people in the world, want to live in peace and be happy.

Both great powers of the West and the East share equal responsibility to avoid escalation of war in Ukraine and beyond Ukraine and give up nuclear stockpiles threatening to kill all life on the planet because of these absurd political quarrels.

I believe all governments should join Treaty on the Prohibition of Nuclear Weapons.

If global leaders fail to negotiate sustainable peace in good faith, instead of [playing the] blame game and [insist on a] violent settlement of their power dispute on the local battlefield in Ukraine, it will be a shame.

But, unfortunately, Ukraine became a battlefield of the new Cold War between the United States and Russia.

From Yurii’s interview on Democracy Now! on 1 March:

It is disappointing that support of Ukraine in the West is mainly military support and the imposition of painful economic sanctions on Russia, and reporting on conflict focuses on warfare and almost ignores nonviolent resistance to war, because brave Ukrainian civilians are changing street signs and blocking streets and blocking tanks, just staying in their way without weapons, like tank men, to stop the war.

For example, in Berdyansk city and Kulykovka village, people organised peace rallies and convinced the Russian military to get out.

Peace movement warned for years that reckless militarisation will lead to war. We were right....

NATO should step back from conflict around Ukraine, escalated by its support to war effort and aspirations of membership of Ukrainian government. And ideally, NATO should dissolve or transform into alliance of disarmament instead of military alliance.

From Yurii’s article, ‘Why Russian and Ukrainian Warmongers Portray Each Other as Nazis and Fascists’, posted on World BEYOND War on 15 March:

Increasing animosity between Russia and Ukraine makes it hard to agree on a ceasefire.

President of Russia Vladimir Putin persists in military intervention claiming he is liberating Ukraine from a regime that, like fascists, kills its own people.

President of Ukraine Volodymyr Zelenskyy mobilises the whole population to fight against aggression and says Russians behave like Nazis when killing civilians....

All references of that sort are simply making a case for ‘just war’ by appealing to the image of demonised enemies from the past entrenched in archaic political culture....

In the broadest sense, fascist-like politics is trying to turn the whole people into a war machine, the fake monolithic masses supposedly united in an impulse to fight a common enemy which all militarists in all countries are trying to build.

To behave like fascists, it is enough to have an army and all things related to the army: compulsory unified identity, existential enemy, preparation for inevitable war.

Your enemy need not necessarily be Jews, communists, and ‘perverts’; it can be anybody real or imagined.

“We should be neutral country. We should commit to universal peace.”

Your monolithic belligerence need not be necessarily inspired by one authoritarian leader; it can be one hate message and one call to fight delivered by countless authoritative voices.

And such things as wearing swastikas, torchlight marching, and other historical reenactments are optional and hardly even relevant....

To resolve the current two-track military conflict, West v East and Russia v Ukraine, as well as to stop any war and to avoid wars in future, we should use techniques of nonviolent politics, develop a culture of peace, and provide access to peace education for the next generations.

We should stop shooting and start talking, tell the truth, understand each other and act for common good with no harm to anybody.

Justifications of violence towards any people, even those who behave like Nazis or fascists, are not helpful.

It would be better to resist such wrong behaviour without violence and help misguided, militant people to comprehend the benefits of organised nonviolence.

When the knowledge and effective practices of peaceful life will be widespread and all forms of violence will be limited to a realistic minimum, people of Earth will be immune to the war disease.

From a Democracy Now! interview Yurii gave on 22 March:

Of course, a no-fly zone is a militarised response to current crisis. And what we need is not escalation of conflict with more weapons, more sanctions, more hatred toward Russia and China, but, of course, instead of that, we needed comprehensive peace talks.

So, 2014 was, of course, a year of starting this violent conflict between [the] government and [the] separatists. And then, after a major battle, after conclusion of peace deal, [the] Minsk agreements [were negotiated], which both sides [have] not complied with. And we see objective reports of OSCE about ceasefire violations on both sides....

And by the way, [there] is incredible hatred towards Russians in Ukraine, and this hatred is spreading around the world, not only to[wards the] warmongering regime but for Russian people, too.

But we see that Russian people, many of them, are against this war. And, you know, I would [pay] tribute – I am thankful to all [the] courageous people who resist nonviolently to war and warmongering, those people who protested against the Russian occupation of Ukrainian city of Kherson.

And the army, invading army, shooted at them. It is a shame.

Ukrainian Pacifist Movement condemns all military actions on the sides of Russia and Ukraine in the context of current conflict. We call the leadership of both states and military forces to step back and sit at the negotiation table. Peace in Ukraine and around the world can be achieved only in a nonviolent way.

War is a crime against humanity. Therefore, we are determined not to support any kind of war and to strive for the removal of all causes of war.