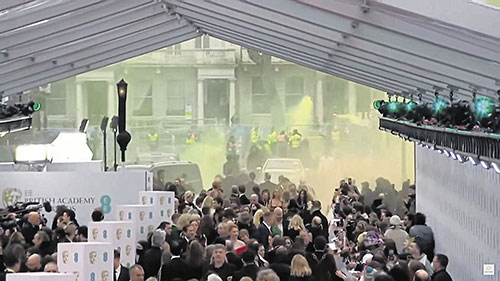 Extinction Rebellion (XR) and Insulate Britain co-founder Roger Hallam has been touring the UK recently, recruiting for his latest nonviolent direct action project: Just Stop Oil. Among other things, he’s been telling audiences that we’re looking at experiencing a 7 ºC temperature rise by 2042 (possibly sooner) – and that solving the climate crisis ‘is not complicated’.

These claims deserve examination. Hallam expressed them, for example, in a talk in Hastings on 10 January. (I’m relying on a Hastings XR transcript of the meeting [1].)

Then Hallam comes in with his magic bullet: all that’s required is for lots of people to engage in ‘disruption’.

He explains: ‘It’s about numbers. It’s about disruption.… That’s what I’m saying to you. It’s not complicated.’

In reality, social change is more complicated than that.

In particular, all other things being equal, plans which are strategically well-thought-out stand a greater chance of success than badly-thought-out ones.

For example, George Lakey has usefully compared the militant campaigns for women’s suffrage in Britain and in the US, just over 100 years ago [2]. Both the WSPU (the ‘suffragettes’) in the UK and the National Woman’s Party in the US were highly disruptive – but in different ways.

The WSPU had more people. Lakey notes that the WPSU was able to mobilise 60,000 people for their attempt to storm Britain’s houses of parliament in 1908. This was ‘a larger number than the entire Woman’s Party membership grew to be across the United States’.

In the US, the National Woman’s Party was more strategically savvy. They specifically targeted US president Woodrow Wilson and also avoided counter-productive tactics.

The WSPU campaign (which began in 1903) lasted 11 years and ended in failure [3]. The Woman’s Party campaign in the US lasted six years and won decisively.

As the case of the WSPU illustrates, some forms of disruptive action (for example, the WPSU’s move to property damage) can actually be an unintended gift to a movement’s opponents.

All of which seems directly relevant to Hallam’s latest campaign, Just Stop Oil.

The plan is to block the UK’s oil terminals, depots and distribution centres ‘day after day’ and to force the government to ‘immediately halt all future licensing and consents for the exploration, development and production of fossil fuels in the UK.’

The demand is sound. But is shutting down the UK’s oil infrastructure ‘day after day’ a tactic that’s likely to help win it?

In 2000, farmers and truckers in Britain did more or less shut down the UK’s oil infrastructure, rapidly creating a fuel crisis that ‘paralysed distribution and brought the country to a virtual halt’ [4]. They won a ‘freeze’ on the fuel tax paid by motorists (with poisonous consequences for British transport policy) [5].

Could the same approach be harnessed to win a climate victory instead?

In her recent book, Ending Fossil Fuels, Holly Jean Buck writes that: ‘The fossil fuel industry has not really mobilised [the] fear of not having enough energy, yet. They are basically playing nice. It is still latent; most people don't think about having their electricity or gas turned off or shortages at the pump. If the fossil fuel industry does mobilize that fear, it will make phaseout far more difficult.' [6]

Would a blockade of the UK’s oil infrastructure by climate activists that leads to major fuel and even food shortages really force the government to capitulate on new fossil fuel licenses?

Or is it more likely that it would be a major self-inflicted wound, enabling the opponents of climate action to mobilise those fears of shortage and to portray climate campaigners as advocating an immediate halt to the use of all fossil fuels, rather than a Just Transition to relying on renewable energy?

One thing is clear. If ‘mass disruption’ is your only goal, you won’t have asked yourself these important questions.

Hallam is also making some disturbing claims about climate science.

At the November 2015 Paris climate conference, the world’s governments committed themselves to holding global warming to ‘well below’ 2 ºC, while ‘pursuing’ 1.5 ºC.

The pledges that governments made in Paris fell short of what was needed to get to ‘well below’ 2 ºC. (This is known as the ‘ambition gap’.)

The action that governments have taken since Paris has fallen short of even their inadequate commitments. (This is known as the ‘implementation gap’.)

Nonetheless, the fact that the ‘well below’ 2 ºC commitment was made at all was widely seen as a victory for the climate justice movement.

In his Hastings talk, Hallam claimed: ‘[W]e've been systematically lied to for the last six years [since Paris].… 2,300 scientists all went along with this lie – that, in 2015, it was possible to stay under 1.5 degrees [Celsius].’ He added: ‘you should not listen to experts’.

The basis for Hallam’s claim is a single sentence in an April 2021 article by three climate scientists for an online journalism site, The Conversation [7]. The authors wrote: ‘We struggle to name any climate scientist who at that time [in 2015] thought the Paris Agreement was feasible.’

What is clear is that Hallam, in his Hastings talk, failed to tell his audience that the science became less gloomy after Paris.

The global carbon emissions budget to achieve 1.5 ºC was found (in 2017) to be significantly bigger than had previously been thought [8]. In other words, the Paris Agreement became more ‘feasible’ after 2015.

What is also clear is that there is no basis for Hallam’s claim that 2,300 scientists have been ‘going along with [a] lie’ [9]. He has more or less invented it.

Limiting global heating to 1.5 ºC has always been an incredibly ambitious goal, especially given how long the necessary actions have been delayed.

As a non-expert, it’s unclear to me whether or not it is still ‘feasible’ in early 2022.

One year ago, however, it was still a matter of serious debate among respected climate scientists. Some claimed it was by then ‘virtually impossible’ – others said that it was ‘entirely doable’ and ‘simply a matter of political willpower’ [10].

However, all those involved agreed that ‘every fraction of a degree, every year and every choice matters.’

Hallam is referring to a paper that appeared in 2020 in the US science journal, Proceedings of the National Academy of Sciences.

It concluded that in a scenario with high population growth in developing countries (reaching 11.14bn in 2070), no climate policies or mass migration and very high emissions of greenhouse gases, ‘the mean human-experienced temperature rise by 2070 will amount to an estimated 7.5 °C, about 2.3 times the mean global temperature rise [of 3.3°C]’ that would have occurred by that time [11].

In other words, in this no-climate-policies/high-emissions/high-population scenario, the average temperature of the whole surface of the Earth (over the seas and the land) would be 3.3 °C higher in 50 years time than in pre-industrial times.

In the same horrific scenario, if we took the temperature of the surface of the Earth in those areas where humans would be living, the average rise by 2070 would be 7.5 °C.

We badly need militant climate activism. That activism needs to be well-informed, not misinformed. It also needs to focus its energies where we can help positive change happen, rather than just ‘disrupting what can be disrupted’.

[3] According to historian Martin Pugh, ‘the WSPU had decisively failed and had entered a decline by 1914’. He claims that ‘the central explanation for the eventual success of the women’s movement’ lies in the expansion of the non-militant campaign into a mass movement, and the ‘alliance between the Labour Party and the National Union of Women’s Suffrage Societies and the latter’s attempt to develop a working-class base during the last two and a half years before the outbreak of war’ (The March of the Women: A Revisionist Analysis of the Campaign for Women’s Suffrage, 1866 – 1914, Oxford University Press, 2000, pages 4 and 253 – 254).

[5] However, the farmers and hauliers achieved this, in part, with the co-operation of the oil industry. Doherty et al, ‘The oil companies used the argument that drivers had been intimidated and they therefore allowed them to remain behind picket lines … But at the same time, the oil companies also showed clear, if minor, material support for the protesters, belying perhaps their claims about intimidation, and at least providing evidence that they were happy for the protests to continue.’ Moreover: (a) ‘the oil companies put very little or no pressure on the police to enable them to prevent any intimidation by protesters which drivers experienced. There were accounts of the protesters sitting on oil company land, but no attempts were made to evict them, let alone invoke the ‘aggravated trespass’ offence created by the Criminal Justice Act of 1995’; and (b) ‘Even though many drivers were employed through sub-contractors rather than directly by the oil companies, the penalties for failure to deliver, which are routine in these outsourcing arrangements, could have been invoked by the oil companies if they had wanted to put pressure on the drivers or their immediate employers.’ Doherty et al go on to note that ‘The apparent success of the fuel protesters was not only a result of the uncertainty they created. The key to their success was rather the way in which the positions they advanced could be articulated with the interests of dominant sections of British society. Sympathy and effective support from other actors provided useful opportunities. Of particular importance here were oil companies, the police and the media.’ Climate campaigners are unlikely to receive similar levels of ‘effective support’ from these sources.

[9] According to the authors of the Conversation piece, some scientists engaged in ‘wishful thinking’ and ‘cowardice’, ‘construct[ing] ever more elaborate fantasy worlds in which we would be safe’ – namely scenarios involving ‘negative emissions technologies’ for removing CO2 from the atmosphere in vast quantities.

[11] Xu et al, ‘Future of the human climate niche’, PLOS, 4 May 2020, https://www.pnas.org/doi/full/10.1073/pnas.1910114117. For more on the high-emissions scenario (RCP 8.5)
and why it was ‘n[ever] intended ... to represent the most likely “business as usual” outcome’ see ‘Explainer: The high-emissions ‘RCP8.5’ global warming scenario’, Carbon Brief, 21 August 2019, https://www.carbonbrief.org/explainer-the-high-emissions-rcp8-5-global-warming-scenario. The latter notes that: ‘A world where global coal expansion continued unabated may have been a quite reasonable assumption in 2010, but seems quite unlikely in 2019 even without any new climate policies. In many ways the world has moved beyond old “business as usual” scenarios through a combination of technological innovation and climate policies already enacted by countries over the past decade. These have caused technology to change in a way that is highly unlikely to be reversed.’

Gabriel Carlyle is the PN promotions worker and a campaigner with Divest East Sussex. In 2009, he was one of 114 people pre-emptively arrested for (allegedly) trying to shut down a coal-fired power station. See also Gabriel’s 2019 article, 'Where XR and the climate movement need to go now’ (PN 2630 – 2631).

Gabriel would like to thank Cedric Knight for his help with this article.