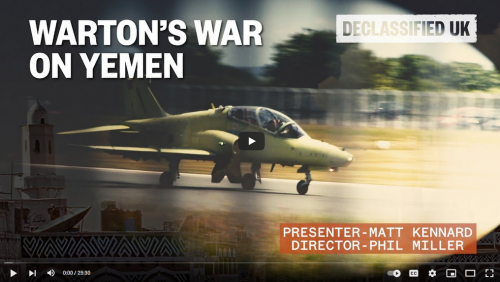 In their classic 1988 book Manufacturing Consent, Edward Herman and Noam Chomsky write that: ‘A propaganda system will consistently portray people abused by enemy states as worthy victims, whereas those treated with equal or greater severity by its own government or clients will be unworthy. The evidence of worth may be read from the extent and character of attention and indignation.... While this differential treatment occurs on a large scale, the media, intellectuals, and public are able to remain unconscious of this fact and maintain a high moral and self-righteous tone.’

The different ways in which the current wars in Ukraine and Yemen have been framed and covered by the UK media are a striking example.

In the first case, where the aggressor is now an official enemy, coverage is extensive (indeed wall-to-wall) and condemnation of Russian atrocities is loud and clear.

The British public has responded by offering to house scores of thousands of refugees, notwithstanding decades of media demonisation of ‘asylum seekers’.

In the second, where UK arms and training are playing a major role in the crimes, the story is rarely mentioned. Indeed, many members of the public probably don’t even know that the war is taking place, let alone anything about Britain’s role. And while turning off the tap of UK arms sales could massively decrease the level of violence, the flow continues unabated.

UK arms manufacturer BAE Systems has sold £17.6 billion worth of weapons and services to the Saudi military since it began bombing Yemen in 2015.

Tens of thousands of civilians have been killed in this bombing, which has helped to create one of the world’s worst humanitarian crises. Yet, according to one former BAE worker, the Saudi air force would be grounded within a fortnight without the company’s support.

The film also recaps the sorry history of British government support for these crimes and debunks the ‘jobs’ excuse often used to justify the arms trade.

However, the main feature of the documentary is an interview with a former foreign office (FCO) lawyer, Molly Mulready.

Mulready worked to defend arms exports to Saudi Arabia when campaigners challenged them in the courts – actions she now deeply regrets.

She tells Kennard that UK government claims that Saudi Arabia has ‘a genuine intent… to comply with international humanitarian law’ beggar belief and that British arms sales are clearly unlawful.

Longtime PN readers will recall similar FCO moral gymnastics over UK arms sales to Iraq, Israel and Indonesia, the deadly economic sanctions on Iraq and a host of other crimes.

To perhaps no-one’s surprise, Mulready also tells Kennard that when she would go to talk with (then foreign secretary) Boris Johnson about arms to Saudi Arabia and civilian casualties, ‘he would just like joke around and waste everybody’s time’.

In the remainder of the film, we follow Kennard’s largely unsuccessful attempts to find people from the area around BAE’s factory in Warton willing to be interviewed on camera about its activities. We also see footage of some of the planes at Warton.

A flight leaves BAE’s factory in Warton every Wednesday, bound for Saudia Arabia. It is believed to be carrying supplies for the fleet of Typhoon fighter jets which are currently bombing Yemen.