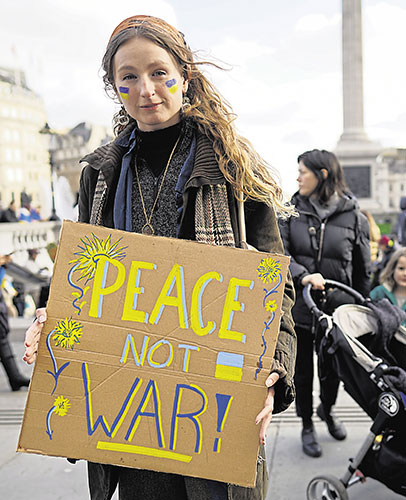 6 March was a global day of action against the war in Ukraine and against NATO expansion. The above photo was taken at the London demonstration. PHOTO: ALISDARE HICKSON VIA WIKIMEDIA COMMONS (CC BY-SA 2.0)

People on the streets are pointing the way out of war, says Symon Hill

Yurii Sheliazhenko has not left Kiev since the war began. The last time I heard from him, he apologised in case the background noise of explosions made it harder to hear him. His home often shakes following Russian missile attacks.

Yurii, secretary of the Ukrainian Pacifist Movement, is frustrated by the way the war is covered in international media. ‘Reporting on conflict focuses on warfare and almost ignores nonviolent resistance to war,’ he says. ‘Brave Ukrainian civilians are changing street signs and blocking streets and blocking tanks, just staying in their way without weapons.’

A number of articles have appeared insisting that pacifism is impossible in the face of the Ukraine crisis. One thing these articles have in common is that the people writing them seem never to have spoken with any Ukrainian pacifists.

Yet members of the Ukrainian Pacifist Movement are resisting war in a war zone. Yurii’s fellow pacifist Ruslan Kotsaba recently spent a year and a half in prison without trial after being accused of treason. His crime was to oppose the Zelensky government’s military mobilisation against separatists in eastern Ukraine.

A cause, not a solution

Arms companies’ share prices have shot up as the bombs have rained down. Some want to make them richer still. Retired generals and militaristic commentators are calling for increased ‘defence’ spending and demanding that NATO strengthens its ‘eastern borders’. Former foreign secretary Jeremy Hunt has called for the UK military budget to be increased by 50 percent.

But these are exactly the sort of policies that the UK and US governments have pursued for years. Military spending has been rising and NATO has been expanding. None of these facts justifies the horrendous violence that Putin has unleashed against people in Ukraine. Given that these policies failed to prevent the Russian invasion of Ukraine, why are they advocated as a means of stopping the war, or of preventing future wars?

The people who make such arguments have turned reality upside down. They rely on claims that can easily be disproven.

There is a myth that western military spending is low. However, the UK never drops out of the list of the world’s top 10 military spenders.

In 2020, as we wrestled with a deadly pandemic, Boris Johnson announced a 14 percent rise in ‘defence’ spending – the highest increase since the Korean War. Four months later, the prime minister announced a 44 percent increase in the number of UK nuclear warheads.

The International Institute of Strategic Studies now calculates that the UK has the third highest military spending in the world – ahead of Russia.

NATO has not been failing to ‘stand up’ to Russia.

At the end of the Cold War, the US promised that NATO would move ‘not an inch’ east of West Germany’s boundaries.

Since then, they have signed up 14 countries between Germany and Russia – and NATO troops have been stationed on Russia’s borders (including British troops in Estonia).

Attempting to defeat militarism with militarism is like trying to put out a fire with petrol. Some have gone on saying: ‘If you want peace, prepare for war’. But they prepared for war – and war has come.

Nukes won’t save us

NATO expansion and western military spending are no justification for Putin’s aggression. Nor are they going to stop it.

As I sit in relative comfort in Britain, I am not passing judgement on people in desperate situations who feel that they have to use a weapon. Such desperation is different to calmly planning a war.

Labour leader Keir Starmer has recklessly supported Zelensky’s call for NATO to impose a ‘no-fly zone’ in Ukraine. This is a euphemism for joining in the war. It would mean the RAF and US air force shooting down Russian planes. For the first time in history, nuclear-armed powers would be directly at war with each other.

If nuclear weapons were the deterrent their supporters claim, then Putin would not have invaded Ukraine, given that its government is allied with three nuclear powers (it would also, incidentally, have stopped Argentina invading the Falklands 40 years ago).

Some argue that Putin would have started a nuclear war by now if it weren’t for the fact that ‘we’ have nuclear weapons. ‘We’ means the UK and US governments – always presented as the good guys.

There is no doubt that British people have responded with compassion to people suffering in Ukraine. It’s a big contrast with the shameless lies and hypocrisy of Boris Johnson’s government. British foreign secretary Liz Truss claims that sending weapons to Ukraine protects ‘freedom’. Yet Saudi forces, trained by British troops, are bombing civilians in Yemen with weapons made in the UK. Every evil that Johnson’s ministers condemn in Ukraine they enable in Yemen.

Vladimir Putin is a vicious demagogue. I am unclear, however, why we are expected to put any more trust in Johnson and his Saudi friends than in Putin.

Raising military spending would be good news for arms dealers, not victims of war.

So what can we do? The only easy answers are those offered by militarists who expect to solve deep-rooted problems with guns. But there is good news: while there are no immediate solutions, there are signs of hope that can be built on.

The key point is this: rulers are only powerful when others co-operate with them. Even the most vicious tyrant needs his troops to obey orders. By working together at the grassroots, ‘ordinary’ people can bring about change.

It is not politicians and generals but unknown people on the streets who are pointing the way out of war. Footage on social media shows Ukrainians demonstrating the effectiveness of nonviolent resistance. Unarmed civilians have stood in front of tanks. They have challenged Russian soldiers to their faces. They have marched daily through cities under military occupation.

Meanwhile, over 15,000 people in Russia have been arrested for peacefully protesting against war.

Ilya, a 20-year-old Russian pacifist, told me that many Russians are doubtful of war but nervous of social reactions. Someone arrested for peace activism may be ‘despised by family, friends or colleagues at work, he[/she/they] may soon be fired from his[/her/their] job or expelled from university’. [pronouns added by me – ed]

Despite this, thousands of Russians have taken actions leading to fines or imprisonment. Russian Orthodox priest Ioann Burdin has become the first person to be charged under Putin’s new law against ‘discrediting’ the armed forces, which can lead to three years in prison.

In Britain, too, ‘ordinary’ people have moved quicker than politicians to challenge Putin’s militarism. Workers in Kent, Cheshire and Orkney have refused to unload Russian cargo.

It may be optimistic to think that Russians might overthrow Putin, that mass non-co-operation in Ukraine will make occupation impossible or that dockworkers in the UK will not unload any war-related goods.

There is a realistic chance, however, that such nonviolent opposition could push Putin and other world leaders to the point where they have little choice but to engage in meaningful peace negotiations.

We can easily internalise unhealthy assumptions: that violence is the solution to conflict, that politicians and generals determine the future, that powerful people who share our nationality will protect our interests.

In reality, people in Ukraine, Russia, Britain, Yemen and elsewhere who work for peace have far more in common than with those who wage war in our name. Change comes from below, and war will end when people refuse to go along with it.

Watch the talk that Symon gave on 7 April 2022 - ‘Ukraine: British pacifism put to the test’

6 March was a global day of action against the war in Ukraine and against NATO expansion. The above photo was taken at the London demonstration. PHOTO: ALISDARE HICKSON VIA WIKIMEDIA COMMONS (CC BY-SA 2.0)

Symon Hill is campaigns manager for the Peace Pledge Union and a WEA history tutor.

Watch the talk that Symon gave on 7 April 2022 - ‘Ukraine: British pacifism put to the test’