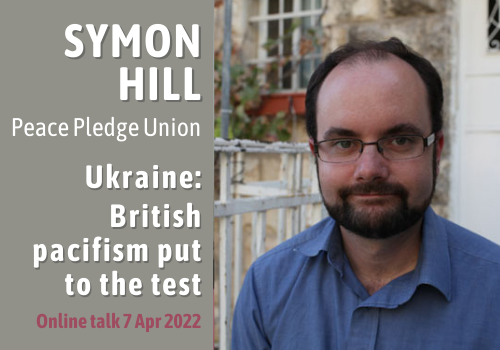 Can pacifism answer the difficult questions raised by the Russian invasion of Ukraine? Isn't it right to supply weapons to someone defending themselves from attack? What about the right of self-defence? Doesn't this case of aggression just prove we need armed forces and nuclear weapons, to be able to defend our homeland from attack – or to deter those who would attack us?

On 7 April, Peace News spoke to a leading British pacifist, Symon Hill, about these questions. This is a recording of the first half of that event, prior to the Q&A.

Symon Hill is campaigns manager for the Peace Pledge Union and a history tutor for the Workers' Educational Association. He is the author of an article in the April-May issue of Peace News, 'Ukraine: a British pacifist responds'

The Peace Pledge Union (PPU) is a pacifist campaigning network and the British section of War Resisters' International. For more on the PPU's response to the war in Ukraine: www.ppu.org.uk/ukraine