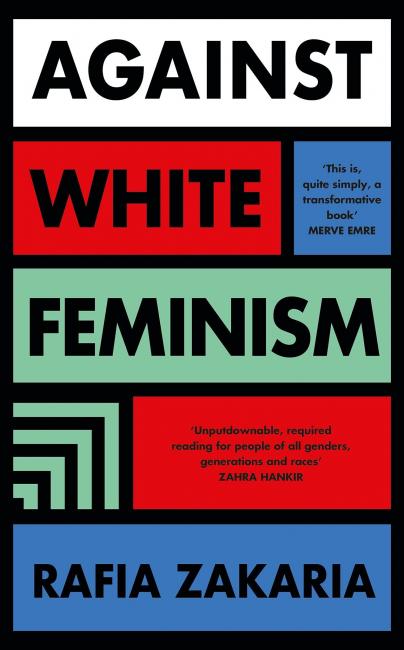 Pointing to the divide between feminist theorists and women with lived experience of oppression through race and gender, Zakaria argues that, first and foremost, white feminism continues to promote the achievements of mostly white women working in high profile fields such as academia, politics and journalism.

Writing with passion and anger, the author uses her personal experiences, such as an awkward drink party with white female work colleagues, to illustrate white feminism at work and make connections with the global context. From this starting point she covers topics important to feminism: from employment and reproductive rights to humanitarian projects and domestic violence in the military.

The author argues that the failure of feminism to acknowledge the ways in which race and gender intersect means that feminism hasn’t resisted wars, but instead promoted them.

A popular reason to support the war in Afghanistan, she reminds us,  was the much-publicised intention to rescue women from male oppression.

The chapter 'White Feminists and Feminist Wars' looks at the role of white women in the war on terror, opening with the capture of Bin Laden, which was carried out by a woman and enabled by a group posing as health workers. The fallout was that female health workers in Pakistan were attacked and Pakistan had to give up its polio vaccination programme.

The US government also trained women in Afghanistan in counter-terrorism, without thinking that they would not want to inform on their husbands or that they would prefer the US army not to be there in the first place. Meanwhile, white women journalists gained prestige from entering women only spaces, and reporting on them, ignoring the damaging impact the war itself had on women’s lives.

Moreover, in promoting their own careers white women, Zakaria argues, have often ignored the heroic resilience needed to continue to provide for a family in a war zone.

At its best being a feminist has often meant working against the state for peace and nonviolence for all women. But in the war on terror, feminism became ‘all about fighting the war along side the boys’.