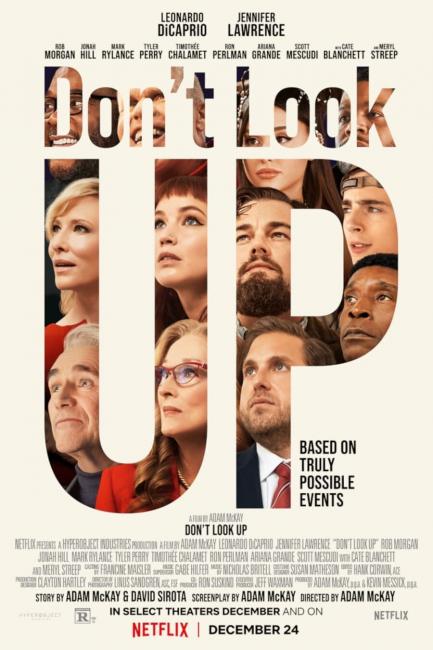 As multiple crises rocked the globe at year’s end, social media burned up with a torrent of pugilistic partisan posts framed in a Bush-like purity test: were you with this trending Netflix film or were you against it?

I caved in to the combination of peer pressure and public health guidelines and watched Don’t Look Up – a comedy in which two astronomers attempt to warn humanity about an approaching comet that will destroy civilisation – only to wonder why so many were celebrating something that seemed to say we’re doomed and there’s nothing we can do about it.

We didn’t need this film to tell us about the climate crisis or vaccine apartheid or the many idiotic things we do as a species.

We know that. We live with that. We doomscroll* it.

And many, many people resist it.

Perhaps the film validates those who feel like we’re constantly banging our heads against the wall and no one’s paying attention. To see Netflix streaming this jeremiad aimed at the Trumps and Musks, we perhaps feel like our efforts are not in vain? That we are being heard? If so, what has been heard, by whom, and to what end?

Although it’s fairly well-made (as much as an extended Saturday Night Live/South Park skit can be, complete with atrocious mugging), there’s a lot of insider baseball scriptwriting that shows how clever Hollywood liberals are when they take down the low-hanging fruit of Republican COVID deniers.

But it won’t win over the climate change deniers because they are all portrayed as hopeless, irredeemable fools. Caricatures don’t make for good storytelling or organising strategies.

Good storytelling is about conflict, yes, but it is also about nuance and transformation, and offering those divided from the best parts of themselves a pathway to change.

What I fear Don’t Look Up ultimately does is disempower the viewer. Its basic message is: you are doomed by right-wing politicos and capitalists.

Well, yes, we absolutely are, unless we resist and organise and come forward with something better.

Which is something we definitely can do.

Instead, $70 million was spent fetishising our self-destruction.

With all that money and star power, why not focus on the many stories of courage and resistance and actual building of hope taking place around the globe?

It’s not like Leonardo DiCaprio, one of the stars of the film, is unaware. He often tweets about them and his foundation supports Indigenous land and water defenders. But when it comes to representing these defenders, they get split-second cameos, when about to die.

Don’t Look Up’s white-framing erases the majority of the world’s population (those whose existence is most threatened) with a narcissistic and nihilistic film about the feared loss of the trappings of white male privilege (a theme not uncommon to the 1980s nuclear freeze movement).

Music and tears well up as DiCaprio says: ‘The thing of it is we really... we really did have everything, didn’t we? I mean, if you think about it.’

The line is spoken not by someone who faces police brutality and racial profiling (like the lone Black man sitting at the table, who even has a token scene about this in the film), not by someone who endures crushing poverty or who endures the daily onslaught of male violence or whose lands have been stolen by investment bankers (whose work benefits people like Leo’s comfortable college professor character).

Perhaps it would have been more appropriate to say: ‘We sure gonna miss everything we stole.’

The fact that DiCaprio’s character completely humiliates his partner and she takes him back with no questions is the ultimate male fantasy as well.

Sadly, the most prominent women in the film apart from Jennifer Lawrence’s ‘saint’ character (Blanchett, Grande, Park and Streep) are portrayed as vile human beings with no nuanced or redeeming qualities. Rather than satirise Trump with a male president because, you know, Trump is a male, they incongruously cast a female president.

Images matter, even in a so-called satire. Narratives also matter.

How many times have we heard: ‘Oh, whatever, there’s nothing we can do about it’? How many of us have ‘liked’ posts about how the arts can change the climate narrative so that people feel they can do something?

This film does not threaten the establishment one iota. In fact, it reinforces it, right down to the missed opportunity in the credits when it consciously chose not to list organisations people can get involved with to challenge planetary chaos.

Hollywood will produce whatever makes money. After all, it made Reds (about the revolutionary journalist John Reed) at quite a profit.

Independent films like Salt of the Earth – made by artists banned from Hollywood during the McCarthy era – are legendary for their inspirational storytelling amidst grave crises.

I look forward to a time when high-profile multi-millionaire film-makers actually produce films we can all enjoy and rally around and want to be part of.

Contrary to the naysayers, films can be about how we can work together to overcome the obstacles that we face – obstacles which are not, as this film implies, impossible to disarm and transform.

* ‘Doomscrolling’ means consuming depressing news and comment on the web, for hours, in powerless despair – ed