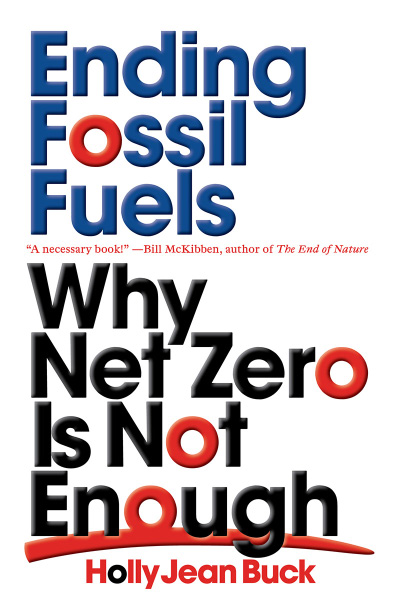 If you haven’t been hiding under a rock for the last three years, you’ll probably have heard of ‘net zero’. This is the idea that, in order to address the climate crisis, we must rapidly bring about a balance between human-caused emissions of carbon dioxide (CO2) into the atmosphere and human-caused removals of the same.

The best versions of net zero could be part of the solution and a instrument for climate justice.

However, as Holly Jean Buck argues in this timely work, the key issue is having a plan for managing the decline of fossil fuels, the burning of which is the main driver of global warming.

Otherwise, net-zero talk and theoretical carbon removal technologies are likely to become a strategy ‘for companies and countries to continue producing large amounts of fossil fuels’.

One problem with net zero is defining the amount of ‘residual emissions’ that are going to be permitted in the net-zero future. ‘Decarbonisation roadmaps set out by countries and cities tend to be vague on this point,’ Buck notes. Many of the plans ‘include 10 – 20 percent of baseline “residual” emissions... which will need to be compensated for by removals’ of carbon dioxide.

Buck points out that it’s even possible for net-zero targets to be less ambitious than older emissions-reduction targets drawn up before ‘net zero’ appeared as an idea.

Moreover, net zero accountancy is often based on speculative assumptions about technologies that may one day appear to remove carbon dioxide from the atmosphere in the future. This distracts from the central issue of rapidly phasing out fossil fuel production in the here and now.

Central to her book is Buck’s belief that ‘[a] political strategy that fails to acknowledge the real-world challenges with scaling up renewables or the appeal of low-carbon fossil fuels will not work’.

Therefore, Buck writes: ‘[t]hose of us who want a complete end to fossil fuels have to take seriously and prepare thoughtful answers to a difficult set of questions’.

These questions include: ‘If producing lower carbon fossil fuels can preserve livelihoods for families and stability for communities, isn’t that better than going completely to zero?’ ‘Wouldn’t some amount of continued fossil fuel production, such as for gas peaker plants [which kick in at times of peak demand], avoid the risks of supply disruptions from an unbalanced grid?’ ‘What if continued hydrocarbon production coupled with carbon capture and storage is the price to pay for peace?’ (Otherwise, Russia might pivot from exporting fossil fuels to arms sales in a near-zero world).

Buck points out, for example, that one recent study found the costs of completely decarbonising Los Angeles’ electricity would be substantially greater than the cost of 80 – 90 percent decarbonisation coupled with a limited use of gas.

Despite acknowledging that there are real trade-offs to phasing out fossil fuels, Buck believes that ‘the reasons to [completely] end them are stronger’. Perhaps surprisingly, she claims that ‘[c]limate change may not even even be the most pressing reason to end fossil fuels’.

Indeed, her top four arguments for ending the use of fossil fuels are: (1) Fossil fuels kill people (causing an estimated 8.7 million deaths from air pollution in 2018 alone). (2) They stifle innovation (the fossil fuel industry spent decades blocking the development of renewables). (3) They contribute to corruption and oppression and conflict around the world. (4) Ending the use of fossil fuels provides a form of insurance against the failure of current climate policies, which usually focus on the demand for fossil fuels, rather than their supply.

After presenting these arguments, the remainder of the book explores five different ways of looking at fossil fuel phase-out. They are: culture, infrastructure, geopolitics, code (in other words, technology) and political power. Buck also examines five major tools for carrying out the phase-out: bans, ending subsidies, extraction permits, nationalisation and CO2 removal.

In the space here, I can only mention a handful of examples.

According to Buck, the social and cultural transition that would need to accompany the phase-out is limited by the social media platforms that now ‘mediate and determine social discourse’. The platforms aren’t built for the nuanced content and dialogue that will allow people to gradually change their minds and question fossil fuels. They rely on ‘dividing the public in half and enraging one side with the other side’s views’.

For this reason, Buck argues, breaking up the technology industry and putting it under public control is a climate issue as much as a democracy issue.

Likewise, she argues persuasively that the creation of a publicly-owned, worker-centred CO2-removal industry is an urgent political project.

As evidence for this, Buck notes: (a) these technologies will be necessary to remove legacy carbon emissions from the atmosphere; (b) there are serious limitations on the ability of ‘nature-based solutions’, such as tree-planting, to remove such CO2; and (c) their creation may be essential to bring workers on board. One official from the US trade union federation, the AFL-CIO, is quoted as saying that they ‘don’t see labor supporting any climate policy that doesn’t include support for carbon capture and storage’.

Nonetheless, Buck also notes that ‘there’s a real chance we won’t demand better use of these technologies, because we’re so understandably cynical about the companies that currently own most of the technology and expertise, and the ability to change them into something else’.

Failure to pursue better use of carbon-removal technologies, however, ‘means a more dangerous climate, continued fossil fuel use, or both.’

Elsewhere, the idea of an internationally-agreed treaty to phase out fossil fuels, modelled on the Nuclear Non-Proliferation Treaty, is given fairly short shrift.

Andreas Malm’s ill-advised advocacy of ecologically-focused sabotage is given an unnecessarily sympathetic hearing. As Buck herself notes, gun-toting far-right groups in the US, like the Proud Boys, ‘have already organised around the [mythical] idea that people are coming to take away their hamburgers’. For activists to start blowing up energy infrastructure would clearly be a huge gift to such forces.

Though it desperately needs an index and occasionally lapses into incomprehensibility (‘Who is the subject with the carbon platform; what relations does it make or unmake?’), I learned a great deal from this book.

Buck has heartily succeeded in her stated ambition to write a book for those who are passionate about ending fossil fuels ‘filled with challenges that will help you sharpen [their] arguments’.

So, read it and join the ongoing global project to make the phasing out of fossil fuels the new common sense. As Buck herself writes: ‘the ability to end things [that are harming us] is emancipatory’.