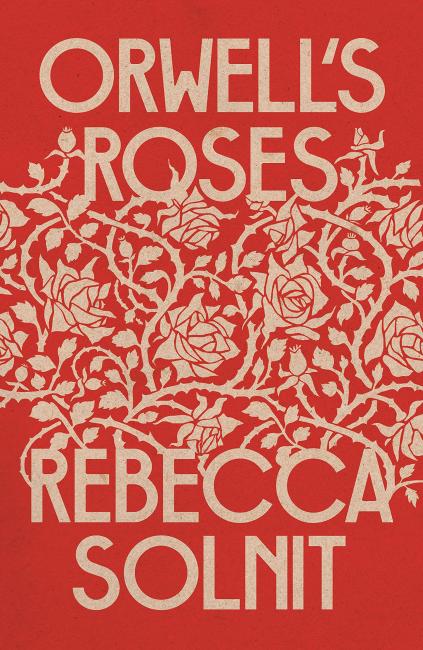 Before it went to the printers, Rebecca Solnit’s publishers tried to get her to add a subtitle to this book. She refused, on the reasonable grounds that, as a book about some roses that were grown by the author of 1984 and Animal Farm, it didn’t need one.

However, what might sound like a ridiculously narrow focus for a book, turns out to be anything but.

In a 1946 essay (‘A Good Word for the Vicar of Bray’) Orwell wrote about some inexpensive roses and fruit trees that he had planted 10 years earlier: ‘the planting of a tree, especially one of the long-living hardwoods, is a gift which you make to posterity at almost no cost and with almost no trouble, and if the tree takes root it will far outlive the visible effects of any of your other actions, good or evil’.

Recently, Solnit went looking for Orwell’s trees, which it turned out had been cut down. But she found what are probably his roses, still growing.

This prompted a series of questions, not least what to make of ‘the fact that this man most famous for his prescient scrutiny of totalitarianism and propaganda, for facing unpleasant facts, for a spare prose style and an unyielding political vision’ had devoted time and energy to these plants of little or no practical value.

More generally, where do ‘pleasure and beauty and hours with no quantifiable practical results fit into the life of someone, perhaps of anyone, who also care[s] about justice and truth and human rights and how to change the world’?

These questions, in turn, led her to write this book, which she describes as ‘a series of forays from [this] one starting point’, taking in Orwell’s life, roses and the ‘vast edifice of human responses’ that have arisen around these flowers, from poetry to commercial industry.

Her description of Orwell’s 1946 essay as ‘a triumph of meandering’ fits her own book perfectly.

Thus one of the most famous photographs of roses ever taken, Tina Modotti’s 1924 Roses, Mexico leads us, via her lover, Vittorio Vidali, to the Spanish Civil War. Vidali (who worked for the Soviet secret police) was to play a leading role in the execution of anarchists and Trotskyists. In particular, Modotti and Vidali both appear to have played a role in the assassination of Andrés Nin, the leader of the Trotskyist militia that Orwell joined when he travelled to Spain to fight fascism. We are back to Orwell.

Orwell’s plantation-owning great-great-grandfather provides the starting point for an exploration of class and colonialism that finds its endpoint in Antiguan writer and gardener Jamaica Kincaid’s essay, ‘Flowers of Evil’, and in Orwell’s denunciation of the British Raj.

In one standout section, Solnit excavates the origins of the call for ‘bread and roses’ in the US suffrage movement. Originally ‘Bread for all, and Roses too’, the phrase was later popularised by the US labour organiser Rose Schneiderman and others.

There are echoes of Orwell’s trip to Wigan in Solnit’s visit to a Colombian ‘rose factory’ where the workers are sometimes compelled to work 100-hour weeks, exposed to toxic chemicals and repetitive strain injury, wearing coveralls emblazoned with Orwellian slogans such as ‘Effort and passion make us feel satisfied in our work’.

Some details are delightful. Orwell’s Aunt Nellie was a suffragist, socialist, bohemian and actress whose French anarchist lover was an eyewitness to the Russian Revolution. Probably the first socialist Orwell ever met, Nellie introduced him to the author E Nesbit, as well as to Henri Barbusse, who published the adult Orwell’s first piece.

Nellie’s friend Myfanwy Westrope (a suffragist, pacifist and vegetarian whose husband had been imprisoned as a conscientious objector during the First World War) gave Orwell a job in her Hampstead Heath bookshop.

The common picture of Orwell as a ‘stern and gloomy’ fellow, writes Solnit, is well-captured in the title of one book about him: Orwell: Wintry Conscience of a Generation.

And while ‘[t]he left has never been short on people arguing that it is callous and immoral to enjoy oneself while others suffer’, it’s an attitude that Orwell himself emphatically rejected.

‘I like praising things, when there is anything to praise’, he wrote in a 1944 column in Tribune ‘and I would like to write a few lines… in praise of the Woolworth’s Rose.’

In response, an ‘indignant lady’ wrote in to say that ‘flowers are bourgeois’.

It is fitting that this book about the importance of joy and non-material pleasures, is a magnificent example of its own theme.

Solnit writes that, like gardening, art ‘can and does help construct the self that engages in politics’. With this, perhaps her best recent book, she succeeds spectacularly in helping us all to do that.