Sowing seeds for the future 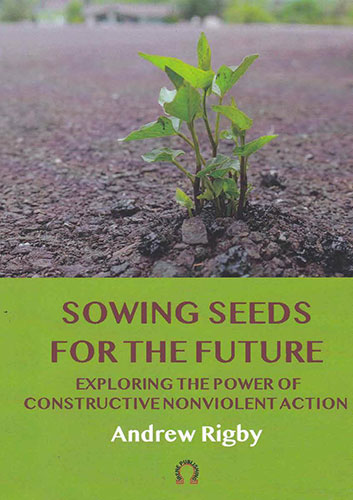 A new book explores the potential of constructive nonviolent action

Peace News carries some of the responsibility for me spending much of the last two years writing a book about constructive nonviolent action.

I was quite young when I became convinced that killing people was wrong, and I began to take on the identity of a pacifist. Peace News was one of my main sources of insight into what pacifism entailed, leading me to an interest in anarchism as part of a search for nonviolent and non-coercive modes of action for change.

At the heart of what I came to understand as constructive nonviolent direct action was ‘prefiguration’ – trying to create the future now. This is a nonviolent version of propaganda of the deed – embodying in our activities the kind of values and relationships we hope to see manifested on a much broader scale over time.

To be honest, I frequently wonder to what extent my interest in constructive forms of NVDA has been driven by my own timidity – and my fear of the possible sanctions that can be incurred by engaging in the more contentious forms of protest and civil disobedience. I confess to being a timid pacifist, who has never felt any temptation to be a martyr for the cause!

On the other hand, that is also one of the real strengths of constructive action – it means folk like me can play their part in struggles for peace and justice. Constructive modes of resistance constitute crucial avenues for broadening the participatory base of any movement for change, and a critical source of the success of nonviolent resistance is mass participation.

Another important dimension of constructive action can be the servicing of the needs of movement activists and wider constituencies of citizens.

Decades ago, in the 1970s, I was part of a community-based printing and publishing project – Aberdeen People’s Press.

We saw ourselves as part of a far broader counter-cultural movement for the creation of an alternative society.

We felt we were contributing through the exemplary action of how the venture was organised as a collective.

We also saw ourselves as providing a printing and publishing service for local community groups and grassroot activists further afield.

More dramatic perhaps than providing printing and publishing services has been the growing practice of accompaniment: unarmed volunteers going into conflict zones in order to support the work of local human rights activists.

Networks like Peace Brigades International believe they can create a degree of protective cover by their physical presence alongside human rights workers and the like. Unarmed civilian protection can help open up the space necessary for local human rights activists to fulfil their chosen role.

There is evidence from various sources that sustained involvement in constructive action (servicing the needs of target constituencies in neighbourhoods and communities) increases the legitimacy (and therefore the effectiveness) of movements for change when they seek to mobilise people for more confrontational forms of action.

A contemporary illustration of this is the success of Ekta Parishad (Unity Forum) in India.

The movement has drawn on the trust of villagers built up over years of constructive work to launch its large-scale foot-marches (padayatras) as a way of attracting the attention of the public and media – and exercising pressure on policymakers regarding the rural poverty.

Like many other peace activists and peace researchers, I have found myself reflecting on the relevance today of Gandhi’s method of satyagraha or truth-force.

Gandhi was convinced that any attempt to launch a large-scale civil disobedience campaign would deteriorate into violent confrontations once people’s passions were aroused, unless the bulk of the participants had been trained and disciplined for nonviolent resistance.

He believed the key medium for this training was involvement in different forms of constructive action. That is why Gandhi recruited the cadres (core members) of the movement from the ranks of the constructive workers, those schooled and disciplined in work for the uplift of the poorest sections of society.

During the Indian independence struggle, phases of mass mobilisation and confrontation were interspersed by periods of relative quiet.

There were times when Gandhi called a halt to confrontations and redirected collective energies towards the constructive programme.

This reflected his awareness that, in a movement based on mass participation, there were limits to the commitment and endurance that could be expected from participants who were not full-time freedom-fighters.

However dedicated activists might be, no movement can sustain extended periods of mass mobilisation without exhausting its followers and ‘burning out’ its cadres.

Constructive work provided something of a ‘safe haven’ for cadres where they could shelter from the front-line struggle and recharge their batteries.

For many years, I have had a special interest in the unarmed struggles of Palestinians against the ever-deepening Israeli occupation.

As in other liberation struggles that have been met with severe repression, many search for quieter ways of expressing their resistance. For Palestinians living under occupation this has taken the form of sumud (resilience), a term used to refer to the manner in which people continue to cling to their culture, their way of life and their oppositional identity.

The same phenomenon has been apparent in different periods of history and different locations around the world – people trying to incorporate into their everyday lives some of the values and practices they believe vital for the sake of their human dignity and their collective future.

Again and again, you find examples of people creating spaces where – to use the terminology of Václav Havel – they can live ‘within the truth’, as a counter to the manner in which they are obliged to live ‘within the lie’ in public spheres of life if they are to avoid serious sanctions.

It should be clear by now that I believe constructive forms of nonviolent action need to be a central part of any movement for change. On the other hand, it also needs to be acknowledged that most modes of constructive resistance lack that degree of drama necessary to grab the attention of broad swathes of the public, including third parties and policymakers, and convince them that ‘something must be done’.

“At the heart of constructive nonviolent direct action is ‘prefiguration’ – trying to create the future now.”

He emphasised the importance of creating positive alternatives to the violent structures and practices that were being challenged. That is why, when he urged people to boycott British-made cloth, he also encouraged them to produce their own clothing.

In confronting the British by refusing to pay the Salt Tax, Gandhi also emphasised the importance of people making and distributing their own salt.

In these campaigns, the constructive dimension was integrated into the protest itself and added to its emotional impact and hence its power of leverage.

Andrew Rigby, emeritus professor of Peace Studies at Coventry University, credits Peace News with shaping much of his political philosophy and ideals since he first came across the paper as a member of a local nuclear disarmament group in the early 1960s. Andrew was for a long time a member of Peace News Trustees as well as the board of Peace News itself. His latest book, Sowing seeds for the future: exploring the power of constructive nonviolent action, was published by Irene Press in October 2021. Andrew urges you to buy it from Housmans Bookshop! More info on Lulu.com (where it is £14.66 plus £3.24 p&p to UK addresses) or from Andrew himself: andrewrig@gmail.com