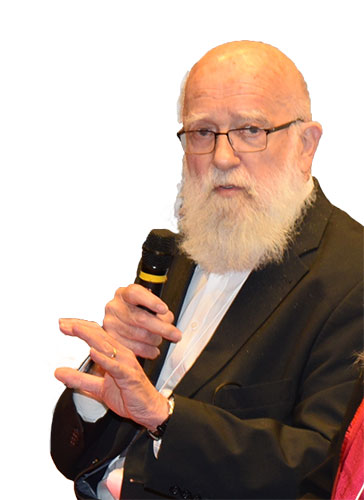 Writer and thinker on nonviolence who influenced Solidarity

Jean-Marie Muller was working as a philosophy teacher when he staged his first major (and much-publicised) protest in 1967. Defying the authorities, he returned his military papers, refusing compulsory military service. The French ministry for the armed forces responded by denying him conscientious objector status. Brought to justice in Orléans with two other reserve officers who had also sent back their military papers, Jean-Marie received a three-month suspended sentence in 1969. The trial of the three was extensively covered in the national press.

Jean-Marie Muller left teaching to devote himself entirely to nonviolence, following in the footsteps of Gandhi and Martin Luther King.

In 1973, Jean-Marie took part in a ‘Peace Battalion’, a sea journey to protest against the French nuclear tests in the Pacific, with general Jacques de Bollardière, the priest Jean Toulat, and the ecologist Brice Lalonde.

In 1974, together with de Bollardière and other friends, he was the driving force behind the creation of the Mouvement pour une Alternative Non-Violente (Movement for a Non-violent Alternative or MAN). He was to be the spokesperson for the MAN for many years, and one of its leading thinkers and strategists.

In 1984, Jean-Marie was one of the founder members of the French Research Institute on Nonviolent Conflict Resolution (IRNC), becoming its first director of studies. With other researchers in nonviolence, he participated for several years, from 1985 onwards, in a nonviolent civil defence study group within the framework of the French ministry of defence.

Jean-Marie Muller’s work at the IRNC, and in the French MoD study group, gave practical expression to his conviction that nonviolence can never be just a question of simply renouncing violence. In his view, it must also mean elaborating structured, coherent alternatives to violence, effective tools with which to challenge injustice and resolve conflicts. This way of thinking found a particularly fertile terrain in the struggles for freedom of the various dissident movements in Eastern Europe in the 1980s.

When Poland sought freedom from communism under the leadership of the Solidarnosc (Solidarity) trade union founded by Lech Walesa in 1980, Jean-Marie Muller’s book, Stratégie de l’action non-violente (Strategy of non-violent action), was translated into Polish without the author’s knowledge. Over 15,000 copies were printed in the underground press. The book persuaded Solidarnosc activists to use nonviolent action in the protests which led to the fall of the Polish communist regime in 1988.

In 2013, Jean-Marie received the International Award of the Indian Jamnalal Bajaj Foundation for the promotion of Gandhian values. This just recognition reflects the extent to which Jean-Marie’s work has its roots in Gandhi’s moral and political thought.

"If violence is destiny, then our life is deprived of all meaning, and our history is absurd.”

Both a writer and an activist, passionately interested in the philosophy of nonviolence, Jean-Marie Muller has intervened countless times in conferences and on radio and television programmes – in France, Europe, on the American continent and in the Arab world (where several of his works are translated).

He also contributed to numerous newspapers (including Le Monde, Liberation and La Croix) as well as several periodicals, including the quarterly Alternatives Non-Violentes (ANV). He was a regular contributor to ANV from its first issue in 1973 right up until 2018. His last article in ANV criticised the doctrine of the just war – used to legitimise French nuclear deterrence. Nuclear disarmament was a major concern of Jean-Marie Muller’s throughout his life, and the last of many campaigns he initiated or inspired was his crusade to promote the cause of unilateral disarmament by France.

Having given this very brief overview of Jean-Marie Muller’s path and life, and without making any claim to do justice to Jean-Marie Muller’s extremely rich philosophy of nonviolence, I will now highlight a few of its guiding principles, and a few key areas of his research.

The first and foremost guiding principle, to state the obvious, is the rejection of violence. ‘Violence is never the solution,’ he liked to say: ‘it is the problem’. In a conference given when he was just 26, he raised the following cry: ‘the world is in a state of violence, a violence which threatens its very existence’.

Equally importantly, Jean-Marie Muller stressed that nonviolence is not simply the negation of violence, it is both a strategy and a set of operational, campaigning principles which have a structured content requiring positive definition. He upheld with great tenacity the principle that nonviolence is never passive, and should never involve capitulation to, or compromise with, injustice or power.

In the debates held by French thinkers on the subject in the 1960s and ’70s, this led Jean-Marie to oppose ‘pacifism’ and to insist on the active dimension of nonviolent struggle.

The cycle of violence which permeates human history can never be broken by counter-violence, he argued, but neither can it be broken by passivity or a simple refusal to bear arms. Such thinking may seem self-evident now, but it took the work of path-breaking thinkers such as Jean-Marie for nonviolence to be understood not just as a morally compelling principle, but as an effective tool for political protest and change.

Another dimension of Jean-Marie Muller’s thinking is his attachment to what we might call, in the wide sense, the spiritual dimension of nonviolence.

Although he parted company with Catholic practice and dogma at an early age, he was influenced by Christian teachings, and saw in Jesus of Nazareth an early advocate of nonviolence, whose message had been perverted by the church.

He returned to this theme in the 700-page Désarmer les Dieux (To Disarm the Gods), in which he made a detailed analysis of the relationship of both Christianity and Islam to violence. Jean-Marie brought to this topical and burning subject, the rigorous, questioning tools of the professional philosopher.

He insisted that there was not one Christianity or one Islam, but multiple manifestations and interpretations of these religions in human history. Some interpretations commemorated the messages of peace and love, some accepted and even celebrated the opposing messages of violence and revenge – which are to be found in the founding books of both religions.

Jean-Marie contributed both to the preparatory work behind, and to the actual text of, pope Francis’s 2016 epistle, ‘Nonviolence: A Style of Politics for Peace’.

We have seen that, quite independently of religion, Jean-Marie saw in nonviolence both an imperative moral principle and a framework for action. It is important to stress that, for him, philosophy and action were inseparable.

For Jean-Marie Muller, nonviolence was not one moral principle among others, one possible political course amongst many. Nonviolence was, quite literally, what gave meaning to life. In his own words: ‘If violence is destiny, then our life is deprived of all meaning, and our history is absurd. Violence is the negation of the transcendence which gives meaning to our shared human adventure.’ (Désarmer les Dieux, chapter one)