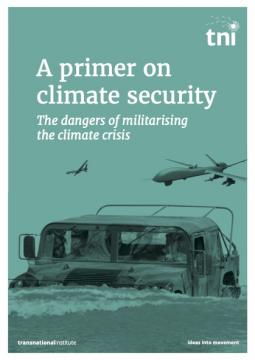 Emissions are only one issue in terms of the relationship of the security forces to the climate emergency. Nick Buxton’s booklet is a timely introduction to the reasons why we should all be extremely worried by powerful national security and military interests, particularly in wealthier nations, setting the framework for the climate debate.

This framework perceives ‘climate security’ in terms of the direct and indirect threats posed to these interests.

Other concerns include the strengthening of the military and ‘security’ corporations, and viewing those impacted by climate change elsewhere as potential threats. Buxton highlights how assumptions relating to scarcity, conflict and migration are being made to fit a security narrative, and questions whether the military are best placed to deliver humanitarian responses.

The MoD states that it ‘must be fully involved’ in wider climate policymaking and responses but, as Buxton explains, allowing the debate to be dominated by the defence and security sector further entrenches the existing top-down security-focused policy framework.

In particular, that security framework ignores the role of a people-powered and co-operative grassroots response to the climate crisis.

And, as with other aspects of national security policy, this approach focuses concern on the interests of (some of) those in the UK.

After exploring areas such as policing, the role of arms companies, and borders and migration, Buxton asks whether we can rescue the concept of ‘security’ from repressive and competitive policymaking. The UK group, Rethinking Security, is already working on this.

The pamphlet ends with a look at how tools for social justice – democratisation, nonviolence, redistribution, and putting the needs and concerns of marginalised groups at the centre of our thinking – could provide an alternative model.

COP26 demonstrated that climate justice will involve a massive challenge to the status quo. As protector of the interests of powerful institutions, including its own interests, the military’s self-proclaimed leadership within climate policy is unlikely to ensure just, peaceful and democratic responses.

This primer provides a wake-up call for what the world is going to look like if we don’t collectively work now for a demilitarised future.