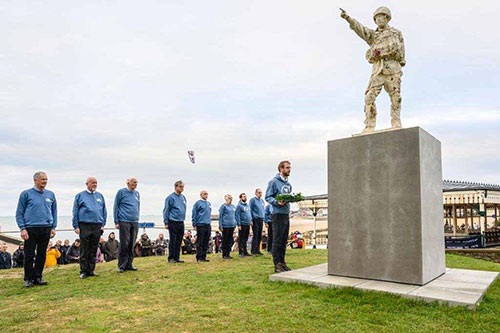 This year, instead of holding a ceremony at the Cenotaph in London, Veterans For Peace UK travelled to Margate for a Remembrance ceremony on 13 November at an anti-war statue of an Iraq veteran and VfP member, Daniel Taylor. PHOTO: VFP UK

Wreaths of white poppies were laid in more than 20 towns and cities around the UK to remember all victims of war on 14 November, Remembrance Sunday.

The white poppy represents: remembrance for _all_ victims of war, a commitment to peace, and a challenge to attempts to glamorise or celebrate war. They were founded in 1933 by the Co-operative Women’s Guild.

Similar ceremonies were held in cities – including Brighton, Derry/Londonderry and Edinburgh – and in many smaller towns.

Leicester University was criticised by former chief of the general staff Richard Dannatt for laying wreaths that combined red and white poppies.

Participants at the London ceremony were welcomed by the PPU’s Anya Nanning Ramamurthy, who had travelled from Glasgow where she had been campaigning about links between climate change and militarism during COP26.

Many participants were visibly moved, some to tears, as Huda Ammori, co-founder of Palestine Action, spoke of her family’s experience of war in Iraq and Palestine.

She concluded: ‘I ask today, while we reflect and remember and grieve for all those killed by war and colonialism, we also reflect on our own positions and what we can do in order to stop this from where we are.’

Two minutes’ silence was held for all victims of war, civilian and military, of all nationalities.

Katherine Allsopp laid a wreath on behalf of the PPU, followed by wreaths from Conscience: Taxes For Peace Not War and from the Fellowship of Reconciliation, and a wreath to remember children killed in war.

Participants included PPU member Richard Barnard, who was able to attend after being granted an exemption from bail conditions that prevent him travelling to London as he awaits trial for nonviolent direct action against the arms industry.

This year has seen growing acceptance of white poppies. The number of outlets selling them has more than doubled in five years and more schools are making them available alongside red poppies.

The PPU has announced a new design for next year’s white poppies. They will be fully recyclable and plastic-free, produced by Calvert’s, a workers’ co-operative.

This year, instead of holding a ceremony at the Cenotaph in London, Veterans For Peace UK travelled to Margate for a Remembrance ceremony on 13 November at an anti-war statue of an Iraq veteran and VfP member, Daniel Taylor. PHOTO: VFP UK

Symon Hill is campaigns manager at the PPU.