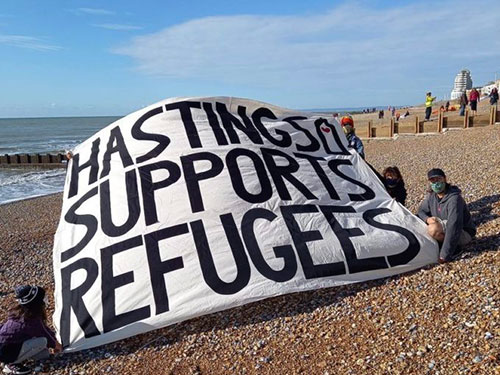 Part of a display of dozens of banners along the St Leonards beach, Sussex during A Weekend of Celebration: A Community Stands Against the Hostile Environment, 10 and 11 October 2020. PHOTO: HASTINGS COMMUNITY OF SANCTUARY

Rachel managed to grab some food, drinks and dry clothes and she raced back to the beach. Things moved very swiftly once everyone was finally brought ashore, drenched and shaking with cold and hunger. It was a question of trying to give them a little food and dry clothing as quickly as possible – in some cases, resuscitating people – and rushing around negotiating with police, the lifeboat crew and the local beach crew.

The buses had arrived, there was no time to chat or even to ask for people’s names.

But, then, as everyone was being herded onto the buses, each person turned and said: ‘Thank you.’

Rachel said later: ‘Even after everything they had been through – their integrity was intact, and their sense of self.’

It was at the end of August that a tiny dinghy, crammed with human beings, appeared offshore near Hastings on the south coast of England. Instead of helping the boat ashore, Border Force ordered it to be left to drift. A lifeboat stood by. It was forbidden to bring to dry land the 54 women, small children and men who had already been on the water for so long.

After more than three hours, the police waiting on the beach decided the situation was too inhumane to continue and they called the boat in.

Witnessing all this was Hastings Supports Refugees member Rachel Lowden, who had been on the beach by chance. She’d seen that there were no provisions whatsoever for the soaked and famished fellow human beings on the boat – and went to gather food, drink and dry clothes.

The south east coast of the UK has become a frontline where two starkly opposing stories about migrants are playing out.

There is our current government’s demonisation of the ‘Other’ who is portrayed as coming here to game the system and harm our way of life.

Challenging this is the warm acceptance by many people of our moral and legal responsibility to welcome and look after those who seek refuge.

How the 54 people on that dinghy were treated gives us a glimpse of the realities of the State’s attitudes and intentions towards those who are the most vulnerable of all – those who are fleeing war, persecution and torture to seek the sanctuary which they are guaranteed under the International Refugee Convention.

Rachel’s actions, on the other hand, are examples of the human need to show kindness and fellow humanity. From our small corner, they put the larger struggle of ideas into a sharp light.

Starting in 2014, the infamous ‘hostile environment’ towards migrants was made concrete in laws that seeped through every weave of our social fabric.

The new legislation meant that everyone – including me, as a university lecturer at that time – became, in effect, an extension of Border Force, of immigration control. We were all ordered to be ever-vigilant and to report on anyone (in my case, students) whom the home office wished to keep under constant control.

Landlords, hospitals, schools – everyone became part of this strategy to make life as hard as possible for people seeking asylum and for migrants in general.

The new Nationality and Borders Bill increases this hostility. Under the proposed laws, only those who are directly invited into the UK under resettlement programmes will, in effect, receive full asylum protection and be able to make new lives with those of us who already live here.

Other people who arrive by ‘legal’ routes may be given a temporary form of asylum, subject to withdrawal at any point and to renewal after a new process every 30 months, with the prospect of deportation looming all the time.

“Not only traffickers will be prosecuted, but possibly crews on RNLI lifeboats – and people like Rachel.”

For those on the small boats, there would be another dimension of brutal harshness.

First, Border Force would be permitted to ‘push back’ that tiny dinghy before it was anywhere near our coast.

Should any harm or death occur, there would be immunity from prosecution.

Once past this gauntlet, any adult on that dinghy would – simply by virtue of the way they have entered the country – have their right to claim asylum in the UK removed.

This is in spite of the government’s own figures that 98 percent of people arriving in these boats claim asylum.

The government wants them to claim it somewhere else – despite the fact that France, Spain, Germany, Italy, Scandinavia and other neighbouring countries already accept vastly more refugees per capita than the UK.

It gets even worse.

Under the proposed bill, all adults on the dinghy would be liable to a prison sentence of up to four years for ‘knowingly’ entering the country in an unapproved way. The implications are frightening, especially for their children. It calls to mind the anguished scenes of separated families at the US border.

Furthermore, in one of the most important changes, anyone helping the people on that dinghy to enter the UK would also face prosecution and potentially long sentences. The requirement that people must be acting ‘for gain’ in order to commit an offence has been removed.

This means that not only smugglers and traffickers will be liable to criminal proceedings, but possibly crews on RNLI lifeboats – and people like Rachel.

Then there are the planned mass reception centres – AKA refugee camps – replacing the current practice of accommodation within communities. Tenders are out to build structures to accommodate over 8,000 people at a time.

Perhaps the most disturbing aspect of the State’s vision is that of ‘offshoring’ – imitating Australia’s notorious practice – which would mean sending people to a third country willing to accept our coin. This would certainly include families with children.

There, people would be in never-ending detention, under the laws and the guards of that third country, out of reach of any legal or humanitarian help. Countries and territories which have been mooted so far include: Albania, Ascension Island, Ethiopia, Ghana, Rwanda and Tunisia.

The new bill has been widely condemned as unlawful, unworkable, and immoral, including by the United Nations. Refugee Action describes it as ‘a wrecking ball to the right to claim asylum in the UK’.

Across the country, there is a growing swell of grassroots opposition, expressed in the ‘Together with Refugees’ campaign now joined by over 300 major NGOs and grassroots groups.

In our own recent street stalls in Hastings, we collected hundreds of signatures for our petition to our MP. The petition asked her to oppose the bill and to work for a fair and humane asylum system. The great majority of the people we encountered in the streets felt that the bill’s harsh new legislation was just ‘going too far’.

Here is Rachel again, speaking about that August day:

‘I came across a very small pair of trainers. They stank, they were filthy, and they’d obviously come off maybe a three- or four-year old.

‘There was something very poignant about the fact that a child had put those trainers on at six o’clock probably that morning – with a view to putting their lives completely at risk – in order to be safe. Some mother had done up those trainers for that child, in that knowledge.

‘I don’t know what will happen to those people.’

Part of a display of dozens of banners along the St Leonards beach, Sussex during A Weekend of Celebration: A Community Stands Against the Hostile Environment, 10 and 11 October 2020. PHOTO: HASTINGS COMMUNITY OF SANCTUARY

Felicity Laurence is a member of Hastings Community of Sanctuary: hastings.cityofsanctuary.org