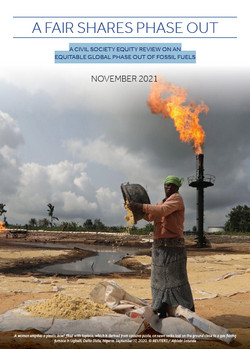 The report is called A Fair Shares Phase Out: a civil society equity review on an equitable global phase out of fossil fuels.

Since 2015, Civil Society Review has been calculating each country’s ‘fair share’ of emissions reductions (see diagram).

This calculation takes into account: (a) that country’s ‘historical responsibility’, its contribution to climate change in terms of all the emissions it has made since 1850 (or 1950); and (b) its ‘capacity to take climate action’, meaning its national income (over what is needed to provide basic living standards to its population).

In this latest report, where the focus is not emissions reductions, but actually phasing out fossil fuels in a way that could limit global heating to 1.5º C, Civil Society Review emphasises different issues.

The phase-out must enable a Just Transition for workers and communities and prioritise the needs of frontline communities worst affected by fossil fuel extraction.

The phase-out must also go fastest ‘where doing so will have the least social costs’: ‘Poorer and more fossil fuel dependent countries are at risk of greater social and economic disruption from an abrupt transition, and should be allowed a longer period to phase out, if more time would indeed be helpful.’

Finally, the costs of the phase-out should be shared fairly, ‘according to ability to bear those costs’. That means wealthier countries providing support to less wealthy countries, to enable them ‘to rapidly phase down fossil fuel extraction’.

Here are some extracts from the report.

The crisis is here and now. Every fraction of a degree increases the risks of crossing irreversible tipping points that may unleash cascading impacts.

Greenhouse gas emissions, and hence, their primary source – fossil fuel production – must be phased out as rapidly as humanly possible if we are to avoid catastrophic damage to the climate system, nature and society....

Co-ordination based on equity [fairness] is essential as a prerequisite for safely exiting crowded theatres, as well as for solving our climate crisis.

Without real equity, countries will not co-operate....

The climate emergency must be understood as a crisis intertwined with myriad other crises.

It is an expression of long-standing structural injustices, exacerbated on a daily basis by elites and a wealthy minority of the world’s population, and is a direct result of historical pollution compounded by decades of deliberate delaying tactics by the fossil fuel industry....

In practice, a fair share phase out of fossil fuels applies equity principles to a strict scientific mandate, where the wealthiest and most adaptable countries cut production fastest and furthest, while nations that are more vulnerable and more dependent on fossil fuels have longer times to transition their economies while developing post-carbon economies that can support dignified and sustainable livelihoods for their people....

We have assessed countries’ NDCs [nationally determined contributions to reducing carbon emissions] against their ‘fair share’ of the global mitigation effort needed to transition to an emissions pathway that preserves a chance of limiting warming to 1.5°C. [‘Mitigation’ means avoiding or reducing the production of greenhouse gases.]

We need more than three times as much mitigation as currently planned to get us onto a 1.5° C pathway by 2030.

While the very wealthiest countries (US, UK, EU, Japan) remain consistently far-below contributing their fair shares of the global effort, in fact, some less wealthy countries (China, India, South Africa, Kenya) have mitigation pledges reaching about – or above – their full fair shares, although others fall short.

Unless all countries markedly increase their domestic emissions reductions, a future within 1.5° C will remain out of reach.

The necessary path is clear. To limit warming below 1.5° C we need to immediately halt new fossil fuel exploration, investment, and extraction.

We must also rapidly begin phasing out already existing fossil fuel production and replace it with clean, distributed and sustainably-generated renewable energy.

Because different countries are more or less dependent on fossil fuels, and more or less equipped to transition, fossil fuel phase out is inextricably a challenge of distribution and equity.

“Governments must enable a Just Transition designed through social dialogue with workers, their unions and communities.”

Phase out should be pursued first and fastest at sites where current extraction and production brings the most harm to local communities and workers, and where phase out has the least social costs.

Countries with high [fossil fuel] dependency and limited capacity to transition must be supported financially by those who are wealthier and less dependent....

Civil society in several of the countries profiled are demanding reparations by governments, companies and investors to clean up and remediate large scale harm caused by the extraction and production of fossil fuels.

Their calls for reparation of social and ecological damage, based on the polluter-pays principle and repayment of ecological and climate debt, must be heard....

Building on the country profiles [in this report], as well as insights from frontline struggles, climate science and principles of equity, we call for a ‘fair shares phase out’ – to eventually eliminate fossil fuels from the global economy in time to limit warming below 1.5° C and enable a just transition for all – guided by the following imperatives:

… All countries will need to contribute toward a global fossil fuel phase out. But in light of the radical difference among countries in terms of their socio-economic dependence on extraction, and vast disparities in their overall level of transitional capacity, an equitable phase out will not have all countries doing exactly the same things at the same pace.

A Fair Shares Phase Out can be downloaded from: www.civilsocietyreview.org