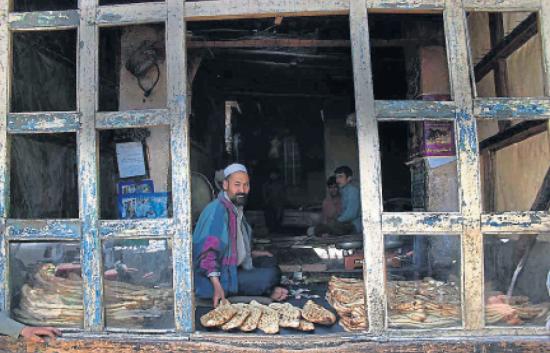 Bakery in Kabul, Afghanistan, 13 June 2005. PHOTO: STEVE EVANS FROM CITIZEN OF THE WORLD VIA WIKIMEDIA COMMONS (CC BY 2.0)

David Beasley told the BBC the situation in Afghanistan had become ‘as bad as you can possibly imagine’: ‘In fact, we’re now looking at the worst humanitarian crisis on Earth. Ninety-five percent of the people don’t have enough food, and now we’re looking at 23 million people marching toward starvation. Out of that, almost nine million are knocking on famine’s door. The winter months are coming. We’re coming out of a drought. The next six months are going to be catastrophic. It is going to be hell on Earth.’

On 22 November, the UN warned that Afghanistan’s banking and financial system was on the verge of collapse which could have a ‘colossal’ impact on the country’s economy and society. (The system could take decades to rebuild if allowed to fail, said the UN.)

The scale of the humanitarian crisis has led to neighbouring countries such as China, Pakistan and Uzbekistan to call on the US and other countries to unfreeze $9bn of Afghan government reserves held abroad (most of it in New York). The reserves were frozen after the Taliban regained control of Afghanistan in August.

A women’s initiative ‘Unfreeze Afghanistan’ was launched in October by the US activist group, CODEPINK, in response to a call from the 45,000-member Teachers Association of Afghanistan. Most of the association’s members had not been paid since June, largely as the result of international financial sanctions.

‘We share the international concern over Taliban rule and the assessment that their government should not be recognised until it proves its commitment to basic norms such as women’s rights to education and jobs, but holding back funds for teachers and healthcare workers is punishing the victims,’ said Medea Benjamin, cofounder of CODEPINK.

The ‘facing hell on earth’ statement from David Beasley of the World Food Programme above came from an interview he gave in Kabul to the BBC’s John Simpson.

Simpson, who has reported from 30 warzones, broke down on BBC Radio 4’s Today programme as he described meeting Fatima, an Afghan widow with seven children (five girls and two boys) who lives a ‘grindingly poor’ life in a cave in Bamiyan.

Fatima used to support her family by weeding fields for a farmer – who now can’t afford to pay her. She has been reduced to begging for firewood and for food.

Simpson said: ‘Looking round at those kids… it was quite difficult. I’ve seen a lot of bad things in my time, but this was…. This hasn’t yet happened and yet you know it’s just around the corner. And they know it.’

These are eight people of the nine million in Afghanistan who are ‘knocking on famine’s door’, according to the UN World Food Programme.

UNICEF warned in late August that one million children in Afghanistan ‘are projected to suffer from severe acute malnutrition over the course of this year and could die without treatment.’

Aid is not enough

The secretary-general of the Norwegian Refugee Council (NRC), Jan Egeland, recently visited camps around Kabul that house people who’ve fled from the conflict in the countryside.

Egeland told Democracy Now! on 16 November: ‘I sat down with the mothers in these displacement camps around Kabul. And I asked them: “What about the future? What do you think of the future?” And they told me very clearly: “We believe we will starve and freeze to death this harsh winter, unless there is an enormous aid operation coming through and unless there is a public sector again that is able to provide services.”’

The top UN official in Afghanistan told the UN security council on 17 November that the humanitarian crisis in the country was ‘preventable’, because it is largely due to financial sanctions that have ‘paralysed the banking system, affecting every aspect of the economy’.

Deborah Lyons, the UN secretary-general’s special representative, and head of the UN assistance mission in Afghanistan (UNAMA), said that her office was delivering aid to nearly 10.3 million people in the country but that humanitarian assistance was not enough.

Lyons told the security council that the international community urgently needed to find a way to provide financial support to healthcare workers in state hospitals, to staff in food security programmes, and eventually to teachers.

The NRC’s Jan Egeland told Democracy Now! that Afghan money held abroad should be unfrozen and foreign aid should be restarted.

He explained that there were ways of channelling money to the people who needed it: ‘Number one, there has to be trust funds, as we call it, that is held by UN agencies, that funnel money directly to the hospitals... where people are dying at the moment.

‘Secondly, unfreeze those funds that will enable banks to function again.

‘At the moment, we cannot even buy relief items in Afghanistan. We have to ship them over, take them over from Pakistan and Iran, which means that employment is dying in Afghanistan.

‘And thirdly, [aid] donors, come down from the fence. See that we are there. We are reliable channels for funding. The money will go to the people.

‘Transmit funding, [don’t] just come with pledges. This will not become Switzerland in a long time. You have to share the risk with us to save lives this winter.’

It was revealed in early November that the UN’s anti-poverty agency, the UN Development Programme (UNDP), had quietly begun paying the wages of 23,000 health workers in Afghanistan, as well as paying for medicines and health supplies in nearly 2,200 facilities in 31 provinces. Money was put directly into workers’ bank accounts or delivered in cash.

UNDP spent $15m supporting the Sehatmandi network of health NGOs that has been described as ‘the backbone of Afghanistan’s health system’. Foreign donors used to funnel money to the health ministry provided nearly all the health services in the country through pay-for-performance contracts with NGOs running thousands of hospitals and clinics around the country.

Many Sehatmandi health workers had not been paid for months even before the Taliban took power in August and international donors cut off aid.

Among its other projects in Afghanistan, the World Bank had been funding the Sehatmandi project (to the tune of over $50m in 2020). The bank stopped all funding to the country after the Taliban takeover, as did the International Monetary Fund (IMF), which had been about to release $450m to Afghanistan. Donors have resumed some humanitarian assistance, but not development aid.

The ‘Unfreeze Afghanistan’ campaign said in October that it understood the concern that if Afghan reserves are unfrozen, money might not get to the intended workers, but it believed that ‘there are a variety of verifiable mechanisms, such as one the UNDP hopes to initiate to pay some healthcare workers’.

Unfreeze Afghanistan said payment mechanisms existed ‘that are transparent and traceable, and that allow either for direct payment to the individuals entitled to receive them, payment through NGOs (as already existed in the case of many healthcare facilities), or accountability for a more centralised payment system’.

The UNDP’s Asia-Pacific director told the Washington Post that this funding was only a ‘temporary lifeline’.

The health sector is just one part of the governmental collapse created by international sanctions.

Vicki Aken, the Kabul-based country director for the International Rescue Committee, told the US broadcaster PBS in October: ‘Longer term, humanitarians can provide stopgap measures, but we’re never going to be a replacement for long-term healthcare or for the government’s education system.’

Amiri told PBS: ‘Humanitarian aid will not be sufficient to prevent the collapse of the Afghan economy’ or the public services built up over the course of 20 years.

Bakery in Kabul, Afghanistan, 13 June 2005. PHOTO: STEVE EVANS FROM CITIZEN OF THE WORLD VIA WIKIMEDIA COMMONS (CC BY 2.0)