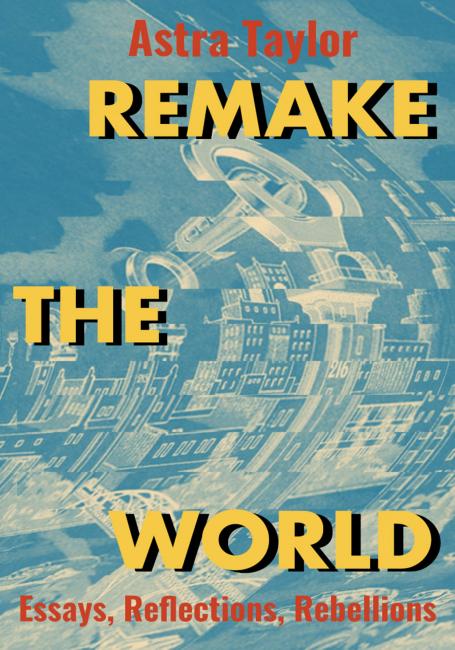 Thus, in a piece on fake automation (‘fauxtomation’), she highlights Thomas Jefferson’s dumbwaiter (which delivered food to his dining room while hiding the slaves who prepared it). Taylor sees this as the forerunner of such modern-day practices as online content moderation (now largely outsourced to low-wage places like the Philippines and India).

At least one visitor left Jefferson’s Monticello estate unimpressed, noting that, for all his talk about ‘ameliorating slavery’, Jefferson was merely ‘gilding’ its chains.

Today, Taylor argues, ‘the labour of making labour seem to disappear’ is everywhere – and should be countered with demands for ‘collective ownership of the robots and generous social benefits detached from employment status’.

In her essay on the growing appeal of socialism in the US, Taylor draws on personal experience, in particular an eye-opening encounter with a group of tenant organisers in Florida.

Taylor writes: ‘As I got up to leave, a young man who had been listening finally weighed in. On his computer, he drew up an old map of St Petersburg from the 1930s, which vividly showed the less desirable, redlined areas where the community’s Black residents were forced to live, a place he grew up in and still called home.

“I’m frustrated by the whole conversation about socialism versus capitalism as though they are separate things,” he said. The current disproportionate affluence that white communities possess, he explained, has been built on centuries of state intervention and assistance. Military forces stole Indigenous land, the government parceled it out and gave it to white farmers, and then a whole apparatus of development and finance was mobilized, first to exclude Black people, and then bringing them back within limited reach of credit and capital – but only on the lending industry’s predatory terms.... As a result, in 2019, the median wealth of white families in the United States hovered at around $188,000, compared with $24,000 possessed by their Black counterparts.” … Socialism, [he] argued, already exists: it’s just not evenly distributed.’

Yet, crucially, Taylor notes: ‘[m]iddle- and upper-class white people aren’t forced to acknowledge and feel guilty for the public benefits that they receive, while poor mothers are made to feel ashamed for using food stamps to feed their kids.’

(‘Redlining’ refers to the denial of loans and services to ‘Negro’ and ‘mixed-race’ neighbourhoods by many US mortgage lenders and insurance companies in the early 20th century. This structural racism was then reinforced in the 1930s by government home ownership programmes that excluded Black areas.)

In one of the film’s first shoots, Taylor stood near Miami Beach asking people to share their political views. In ‘The Right to Listen’, she recalls one respondent celebrating his friend’s ability to be racist within earshot of ‘six large Black men’: ‘I thought there might be a problem. Not in this country! They heard, it’s democracy. Joe can say whatever he wants.’

Taylor contrasts this ‘conception of democratic life… centred on self-expression, with listening left out’ with her experience hosting a debtor’s assembly (a forum for people to share their stories of financial hardship) in Chicago.

Stunned by the latter’s power, Taylor writes that: ‘Afterward, walking in the cold, I couldn’t help but think of listening as something we’re all entitled to – a right we’re often denied and that the assembly had just reclaimed’ – before going on to look at what that could involve.

Another thread running through many of these essays is grassroots resistance.

In ‘Who speaks for the trees?’, Taylor tells the story of Grant Township, a tiny community in western Pennsylvania that granted eco-systems legal rights as part of its struggle with the fracking industry.

In ‘The Insecurity Machine’, it’s the story of the mostly Black and female tenants of a Brooklyn apartment block who successfully resisted the installation of a new facial recognition ‘security’ system .

In ‘Against Activism’, Taylor argues that, while important, activism too often takes the place of organising, ‘which involves not just enlightening whoever happens to encounter your message, but also aggregating people around common interests so that they can strategically wield their combined strength.’

Though no slouch herself in either department, Taylor confesses (refreshingly) that: ‘I, for one, would rather read about history than make it, since real political work involves continuous interpersonal negotiations, meetings that never end and receiving and responding to hundreds of emails a day. It’s reactive, not contemplative, and I prefer life with more of the latter. There’s a myth that activism is the natural domain of a certain subset of human beings that thrive in group discussions, protest planning sessions, and vegan potlucks.… It’s a myth that lets us all off the hook, perpetuating the old idea that it’s someone else’s calling to actually make change.…’

An essential and inspiring read for anyone trying to organise for a better world.