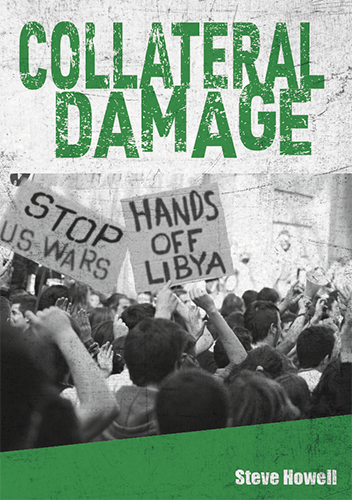 Those raids (abetted by the UK, who allowed planes to take off from Lakenheath) allegedly struck at targets linked to terrorism. As is always the case, they resulted in the deaths of civilians, including colonel Qaddafi’s infant step-daughter.

Collateral Damage is set a year after these events.

The book begins with the funeral of Tom Carver, a peace activist who died while attending a conference in Tripoli to mark the first anniversary of the strikes. While the authorities, aided by Tom’s father, major Carver, portray his death as a tragic accident, his girlfriend, Ayesha, and her friend, Hannah, are not convinced.

Hannah persuades her ex, Jed, a lawyer supporting immigrants, to accompany Ayesha to Tripoli to investigate further. They are blocked at every turn – by major Carver, who blames Ayesha for leading Tom astray, by UK diplomats wanting to avoid scandal, and by a Libyan government fearful of disrupting tense relations with the UK.

As Jed and Ayesha push to find the truth, they find themselves both in danger.

This is a thriller that has a lot going for it. Rooting the story in the 1980s reminds us that US and UK interventions have always ended up causing civilan deaths (‘collateral damage’), and that our modern wars are just a worse expression of this fact.

Likewise, Ayesha’s Palestinian background enables the author to explore the Israeli atrocities of the period, including the massacre of Palestinian civilians at the Sabra and Chatila refugee camps in 1982. Her flashback to the aftermath of the massacre and the deaths of former pupils is vividly drawn. Surviving such horrors gives her quest for justice for her fiancé an added dimension while providing helpful historical context for the current situation in Palestine.

While the novel has all the ingredients of a decent conspiracy thriller – implacable officials, threats, racism, cover-ups, and a fight to expose the truth – it didn’t quite land for me.

The author is a journalist by trade and the story often feels like episodes of reportage rather than a coherent narrative. The ending is somewhat rushed and I’d have liked to have seen stronger links between Jed’s dying father’s past as a political photographer and the main plot.

Still, it is always good to see a work of fiction that demonstrates so clearly that US, UK and Israeli foreign policy rests on the assumption that civilian deaths (on the ‘other side’) are an acceptable price of war. And, as Jed tells us at the end, our duty as activists is to stay strong to keep up the fight.