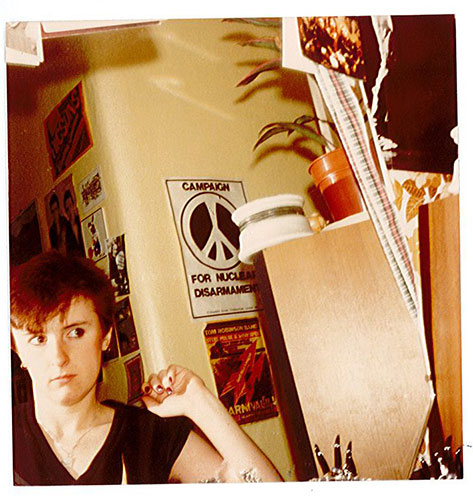 Claire selfie in the mirror, 1982. Note posters in the background. PHOTO: CLAIRE POYNER

In the world of entertainment, you hear talk of ‘multi-hyphenates’, people like actor-director-writer Angelina Jolie. In a world just as glamorous as Hollywood itself, the world of the Peace News family of companies, the leading multi-hyphenate must be our very own Claire Poyner. Claire is: admin worker and company secretary at Peace News; board member at Housmans Bookshop; trustee on Peace News Trustees (the third company in the family); tenant at Caledonian Road (in her work for the Network for Peace, which has a desk in the PN office) – and, most importantly, PN columnist!

Worker-director-trustee-tenant-columnist Claire has been part of the backbone of PN for 15 years, having become our admin worker at the end of 2006.

When I interviewed Claire recently, I asked her for her favourite memory of 5 Cally Road. The first thing she mentioned was ‘making a fuss of Ippy’s dog, Pavlov’ (Ippy D being our previous editor): ‘It was nice when we had Pavlov in the office.’ (The second thing she mentions – to my surprise – is ‘Ippy’s loud music’.)

Later on in our conversation, Claire mentions that many women have impostor syndrome which can be very undermining. I ask what her strengths are, and she replies: ‘Attention to detail. Filing. The administration of things – and keeping websites and databases up to date.’ I suggest that most folk would describe these as unglamorous and thankless tasks. Claire pops back, briskly, cheerfully and with a characteristic dollop of realism: ‘Doesn’t bother me. I do sometimes get thanks. I get some people I know from various organisations who might say: “Oh, Claire, here you are today, you’re so efficient.” So it does happen sometimes. But I think that if you don’t get many complaints that’s as good as it’s going to get, basically.’

It turns out that Peace News is part of Claire’s inheritance. Her mum was a Quaker who read PN (‘I think sometimes she used to take it home from the Meeting House’) and who always got the Housmans Peace Diary.

Claire’s parents were both lifelong socialists, as were their parents. ‘It runs in the family,’ Claire said. Her mum was a clerk, a typist, and her dad was an electrician’s apprentice to start with. ‘When he qualified, nobody wanted to employ a qualified electrician, they wanted to employ an apprentice, cheaper. So he ended up as a Co-op insurance salesperson,’ going door-to-door. Eventually he got a job with NUPE (the National Union of Public Employees), one of the three public services unions that merged in 1993 to form the mega-union, UNISON.

Claire worked at a NUPE office in London in the summer of 1979, ‘and that’s where I met Jeremy Corbyn [the former Labour leader] and Bernie Grant’, the late Labour MP for Tottenham. (Jeremy always remembers her when their paths cross.)

“It’s a bit like the pandemic, you know, it’s gone quickly and yet it hasn’t.”

Apart from a couple of years in Hampshire when she was little, Claire has lived in London her whole life. She was born at Central Middlesex Hospital in Park Royal, North-West London, and went to school in Wembley before going to Hampshire. When her family moved back to London, they went north to Enfield. Claire says, with a typically sharp finish: ‘My teenage, formative years were in Enfield, which is very much the suburbs. Enough said. I prefer inner London.’

Claire’s parents were active members of Enfield Peace Group and they’d both been very early members of CND – ‘they went on one of the first Aldermaston marches, took me as a babe in arms.’ When Claire started going on protests, it was not an act of teenage rebellion: ‘No! I didn’t see it as rebelliousness at all. That’s what you did! It started with my parents in the ’60s, with “Ban the Bomb” demos and things.’

At Southgate Technical College, Claire joined protests against the National Front (‘National Front is a Nazi Front’), demos to protect the Abortion Act, anything to do with anti-racism, and the big CND demos in the early ’80s. She wasn’t in any particular group, just part of the ‘general lefty, environmentally-friendly, feministy peace scene.’

She joined the Labour Party, and then left (along with her father) because of Tony Blair’s leadership. Later, she joined the Green Party, because it’s ‘a slightly more left-wing, slightly more socialist party than Labour.... It matches my political ideals more and I think that, at the end of their lives, my parents’ as well.’

After doing social sciences at the Polytechnic of Central London, Claire went to work in medical records at North Middlesex Hospital (‘grim, occasionally’) and then at an educational institute for internal auditors. Then she went travelling.

‘I travelled to Singapore, visited a friend there. Went around Australia. Back via Hawaii and Los Angeles. I did intend to do a bit more of the West Coast of America but I was having too much fun in Los Angeles. We went to Paramount Studios and saw three people from Star Trek: The Next Generation walking through, and waved: “Hi guys!” That was nice! And then I came back, and then I met Jessica’s father and got pregnant, and then we split up. And then I got housed, and then I did a computer course. As part of that course, the work experience involved a few weeks at Campaign Against the Arms Trade, where my mum was a volunteer for many years.’

After that, Claire was first a volunteer then a paid worker at the National Peace Council. She had a stint as the administrator for Abolition 2000, the global network to eliminate nuclear weapons, then became the part-time admin worker at Christian CND, despite not being a church-goer (though Claire did attend Quaker meetings as a teenager and went to several Young Quaker Summer Schools).

When the National Peace Council folded and the Network for Peace replaced it, Claire became the part-time admin worker for the NfP as well – which is how she first came to work in 5 Caledonian Road, the home of Peace News and Housmans Bookshop.

That’s not quite correct. Claire had already done some voluntary work in the building before that, at Nonviolent Action, a monthly UK-focused newsletter produced alongside Peace News around 2000. Claire did layout and some writing: ‘that got me involved with Peace News so that, when there was a vacancy [in 2006], I applied for it, and that was when Ippy was still editor, and I’ve been here ever since.’

All these years later, Claire’s working week is still split between the Network for Peace, Christian CND and PN!

She describes working at PN as comfortable: ‘I walk there most days now, since the pandemic. It’s my patch, it’s where I live, and I like seeing what’s going on down the road and seeing people I think I know. Yeah, and I get a bit of exercise.’

When asked to sum up her 15 years at PN, Claire wonders: ‘Where did the time go? It seems like no more than 10 years since I was sitting in the office with Ippy listening to her loud rap music, with Pavlov sniffing and nuzzling me to pat her on the head, but actually it’s more like 15. It’s gone quickly in some ways and then, in other ways, it hasn’t. It’s a bit like the pandemic, you know, it’s gone quickly and yet it hasn’t.’

Claire selfie in the mirror, 1982. Note posters in the background. PHOTO: CLAIRE POYNER

Claire Poyner is the Angelina Jolie of Caledonian Road.