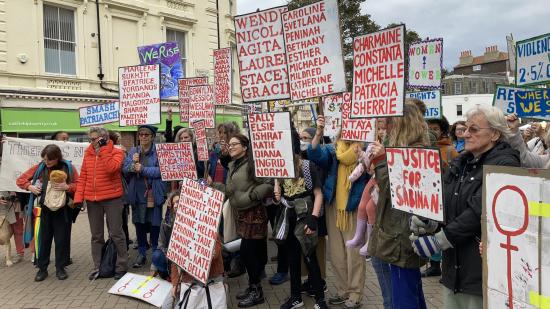 Women Reclaim Hastings on 23 October. holding the names of 112 women killed in UK between January and August. PHOTO: PN

I found myself at the front, marching down George Street, a very narrow street. It’s semi-pedestrianised and has cafes all the way down it – lots of people were sitting outside.

We were shouting, it was a noisy, loud demonstration.

The street, the whole street ahead of us, just fell completely silent.

The feeling that was coming off people was that the march was so right, and the message was so right, that it was sort of a social shock.

It seemed to me that the men and women sitting there were in support of us but were also experiencing great shock and great shame, all mixed up together.

It wasn’t like a normal march where people disagree with you, and pretend that you aren’t there, and turn away.

We drew people in and they joined us.

Obviously not everybody was supportive, there was somebody on a motorbike who drove right into the demonstration.

The backlash anger was there.

The placards we were carrying were all home-made, all very strong and very beautiful.

Perhaps the most striking were the ones with lists of names of women killed between January and August this year.

If each of us had carried just one name, there wouldn’t have been enough women on the march for us to have carried all the names of all the women who’ve been killed in Britain in just that short space of time.

The demonstration came after two years of our group, Women’s Voice, raising awareness of domestic violence and coercive control in our town, Hastings.

We’d persuaded pubs to have leaflets and posters for women about coercive control.

A film was made with actors reading the words of local women who’d experienced domestic violence. That went out across social media.

Its purpose was to amplify the voices of women and to give directions to where they could go to receive support.

As part of a month of events, we had placard-making workshops. They were a space for having conversations while doing something.

We’d had poster-making workshops a couple of years ago, around the centenary of the women’s vote and then around the 50th anniversary of the Second Wave women’s conference in Oxford. Both of those workshops were about ‘what’s changed, what do we want now’.

I found it interesting how difficult it was to articulate the changes that we wanted.

Even with stopping violence against women, it is difficult to come up with something that can be put on a poster.

Placards like ‘Smash the Patriarchy’ are shorthand for something that is everywhere and pervades our whole social system.

Without dismantling that, how do you dismantle violence against women?

During the placard-making workshop for this latest march, a young, nervous woman came because one of her friends had come to our dayschool about domestic violence.

“There is a movement welling up that has the qualities of witch-burning.”

As we were all chatting, cutting cardboard and getting to know each other, she suddenly said: ‘My partner believes all this, he believes that violence against women is okay and that I should serve him.’

Just painting on the cardboard, in company and in conversation, there was the first glimmer for her: ‘Something should be different, I need to find my way through’.

Afterwards we went together to the singing workshop, where we sang songs about speaking out about violence.

I think it gave her community and the energy to perhaps have a different life.

One of the songs we sang has these words: ‘No one knows me, no one ever will, if I don’t speak out’.

There were lots of women on that march.

I only know the stories of some of them, quiet secrets, of their experiences of violence and often sexual violence, by brothers, fathers, lovers and strangers.

I am shaken that so many women I know have experienced this.

Where once there was the space to be angry, now it feels like that time has gone, and politics has moved on, that how we effect the change we want is a lot more complicated.

Women are having to navigate the incel movements and a growing conscious philosophical commitment to violence against women.

There is a movement welling up that has the qualities of witch-burning.

I listen to mothers in my town who whisper with incomprehension that their sons are embracing the thin end of these attitudes; that the young men believe that the assertion of women’s rights and women’s power is some explanation for their loss of a sense of identity, of manhood, of connection.

The challenge for feminists is to deal with all that and to bring men and the general public onto our side while recognising that men, especially young men, are being exposed to a narrative of hatred that is way beyond the sort of misogyny they were exposed to in the ’70s.

I was carrying a placard I’d made that said: ‘Men – teach boys kindness’.

He felt it was very important to be kind and for me to acknowledge that he is kind.

I sensed that he had been taught that kindness was an important quality and he was being a good person because he was being kind.

The goodness was that he came right up and walked with us.

When we gathered in a large circle at the end, Ann Kramer gave a speech. She’s been an actively-campaigning feminist and writer for the last 50 years but her call was for men now to do the work on that change that needs to happen and to be in solidarity with women.

There was a woman at the beginning of the march who was new to activism in Britain.

Seeing a police car, she was worried.

She wasn’t scared because of what has been happening in the Met, she was scared because, in the country she came from, if the police were there, you could expect violence.

I said: ‘There won’t be violence today because violence by police officers against women is too politically high profile right now.’

We’re not just talking about Britain, but about the world. We should remember that when women protest about domestic violence, they so often have to be afraid of state violence as well.

Women Reclaim Hastings on 23 October. holding the names of 112 women killed in UK between January and August. PHOTO: PN