Judith Butler, The Force of Nonviolence: an ethico-political bind 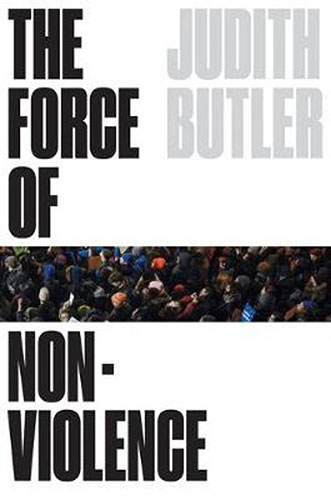 The author, a well known philosopher and gender theorist, seeks to secure the often ‘disputed’ terms violence and nonviolence through a project that explores texts from psychoanalysis, sociology and philosophy. In the quest for a definition, Butler starts with the philosophical fantasy of premodern man in a state of nature, in perpetual, selfish conflict with his neighbours. This man arrives on the scene as a fully formed adult, excluding women, children, the elderly or sick from discussions of violence.

In contrast, Butler writes, nonviolence must be considered in the context of social relationships and interdependency with other beings, both human and nonhuman. The pursuit of nonviolence is a political endeavor which involves a commitment to equality - violence being a case of extreme inequality. In addition, nonviolence is incompatible with individualism; it is where ethics, morality and politics meet in a potentially transformative, revolutionary combination.

In response to the common argument that nonviolence is a luxury and that, in a dangerous world, people have a right to self defence, Butler responds by asking which self is being preserved in self defense and how far this self (or selves) extends, and who it includes. In this way they introduce a central theme of this book, 'grievability', meaning the extent to which lives are mourned.

Asking which lives are considered more or less worthy of being mourned, exposes injustice and inequality, as well as historical and contemporary racism. Butler gives the example of the ‘cruel mourning’ of the anti-abortion lobby in which the mothers’ lives are put at risk. If there are those who should not be killed, because their lives would be mourned, Butler continues, we should also wonder whose lives should be preserved and well cared for.

There are disagreements over which lives should be mourned in different times and places. Groups, such as Women in Black gather to mourn those a state considers less grievable: the lives that have been lost as well as those that will be lost. Black Lives Matter protests have demonstrated the huge power in mourning.

Butler shows how the consideration of lives that will be grieved in the future, challenges the ways in which states control populations as well as the logic of war. To give a recent example, the Treaty Prohibiting Nuclear Weapons attempts to put victims of nuclear testing under the list of obligations of state parties.

Butler uses their reading of Walter Benjamin’s philosophical essay, ‘The Critique of Violence’, to investigate the need to define violence and not just ‘accept general relativism’. According to Benjamin natural law ('law in a state of nature') and positive law (the laws and rights of a justice system) both incorporate violence through a framework of means and ends (that is, violent means are justified by the ends that they help to bring about).

Benjamin contrasts this with what happens during a strike. Workers down tools, in itself a nonviolent act, hoping for better pay and conditions. However, the strike also contains a threat, which could be perceived as violent. Indeed, a general strike, even if nonviolent, could be perceived by the state to threaten its whole existence and therefore to justify the use of violence, by the state, to suppress it. The way in which the word 'violence' is being defined here ‘oscillates’ between legally sanctioned violence and revolutionary threat - even when the latter threat is nonviolent. Butler sees this ‘oscillation’ as evidence that we must ‘track and expose’ the variations in the ways that the terms violence and nonviolence are defined, and by whom.

Recent Extinction Rebellion protests sought to be disruptive on a large scale. As Butler writes, it is shocking to think of protest such as this being labeled violent, but the state sees these kinds of protests as a threat to the whole system of legal violence and power. Butler lists some recent of the victims of US police violence, calling the force behind the killings ‘racist phantasmagoria’: the US policeman is tricked by his own capacity for violence into believing that the unarmed black man or woman, running away, or even asleep, is in fact armed and about to attack. [The Oxford dictionary says a phantasmagoria is: ‘A sequence of real or imaginary images like that seen in a dream.’ – ed]

Benjamin’s essay, written in 1921, is a strong philosophical reminder of how states justify violence, but also what he calls the ‘divine’ power of bodies in the street.

Through their focus on the themes of grievability and affirmation of life, Butler demands that we move beyond the framework of means and ends and provides the reader with a different, modern perspective. In their postscript, they apply these themes to contemporary examples, such as the many migrant lives lost in the Mediterranean. Every day the news provides examples: the huge numbers of COVID deaths in care homes in the UK for instance.

I've reread this book a number of times, finding it an invaluable help in forming my own thoughts on nonviolent protest and why our government finds it so threatening - but also, more significantly, on historical and contemporary racist violence, and the many lives lost and not properly cared for.

Reading this book, I felt very much encouraged to imagine and work towards a future of equality.