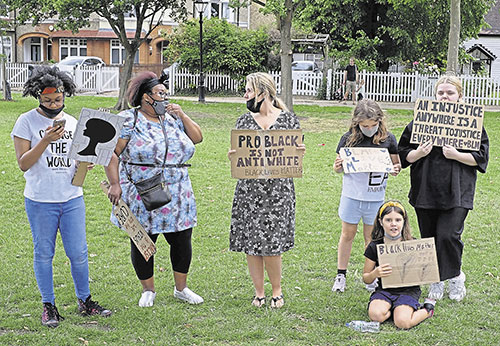 Being ‘colourblind’ on race is a problem

Last autumn, PN ran a survey asking peace activists how they had responded to the Black Lives Matter (BLM) uprising of the summer. I was deeply impressed by the wealth of constructive actions that people had taken in the previous few months. (PN 2646 – 2647)

It was clear that, for many people, the death of George Floyd and the massive protests that followed, had been huge events.

I remember the white person who wrote: ‘I thought there were virtually no black people living in my small town but now I see them every day. I thought it was good to be colour-blind but now I see that that in itself is a form of privilege.’

The idea of being ‘colour-blind’ cropped up several times. One person wrote: ‘Very sad that we have been reduced to skin colour judgements and campaigning as I don’t see my friend’s skin colour, its not relevant to our friendship. Culture is.’

I see the good intention behind this attitude, but I wish I could communicate how painful this kind of thinking is for many people of colour.

I wonder how this person would feel, if we were able to roll back to the 1970s, and heard a male activist say, in response to second-wave feminism: ‘I’m very sad that we have been reduced to gender judgements and campaigning as I don’t see my friend’s gender, it’s not relevant to our friendship. Culture is.’

Our survey person might say something like: ‘Can’t you see how men are dominating conversations and dictating the agenda of our groups? How they’re interrupting women and speaking over them, how they’re expecting them to cook and clean for the group? How men turn to women for emotional support, but never give it? How men keep stepping forward to be the “spokesmen”? Women are furious about these patterns and how men don’t notice them. We need to change things and we can’t possibly start changing them if we don’t at least notice how gender is working in our groups!’

When I was 16, I sat on my bed with a knife and nearly stabbed myself. When a white person says they don’t ‘see’ me as an Asian, they’re saying that the racist bullying I experienced could not have happened, there was no reason for me to have felt like killing myself – because they see me as white.

This is an example of what some people call ‘erasure’, trying to rub out of existence my difference, which is an essential part of me and my story.

Our survey asked for responses to ‘the BLM uprising’. One person, who identified themselves as English/Welsh, sneered: ‘I was unaware BLM was an uprising.’

I think it’s hard to avoid using a word like ‘uprising’ to describe the thousands of documented protests that took place in May and June last year across every state of the USA, in thousands of towns and cities.

On just one day, 6 June 2020, half a million people turned out for BLM events in nearly 550 places across the US, according to the Crowd Counting Consortium.

Four major polls in the US suggested that between 15 and 26 million people took part in BLM protests.

US researchers Erica Chenoweth and Jeremy Pressman, who have been collecting data on political crowds in the US since 2017, analysed the 7,305 BLM events they found reports of.

They discovered that, in 97.7 percent of the US protests they had information on, no injuries were reported among participants, bystanders or police. Only 3.7 percent of the protests involved property damage or vandalism.

This analysis was confirmed by a separate study by ACLED. The Armed Conflict Location & Event Data Project recorded 10,330 BLM protests in the US during the whole of 2020 – in more than 2,730 locations, in every state.

Like Chenoweth and Pressman, ACLED and its partners found that 94 percent of these events ‘involved no violent or destructive activity’.

(I haven’t been able to find similar detailed studies of BLM protests in the UK or other countries.)

All this is important information given that several people in our survey last September were worried about ‘the angry and often violent [tone] of the [BLM] demonstrations’. They were concerned that BLM ‘appears non peaceful’ and calls for ‘retribution through violence towards police’.

I don’t know where that last smear is coming from. I’m not aware of any BLM figure in the US or Britain who has called for violence towards the police – or of any BLM statement calling for violent revenge.

I can’t help wondering if some of this comes out of the deep fear held by many white people that ‘black people are violent’.

For me, the saddest moments of reading through the survey responses was when people came close to blaming African-Americans for the police violence against them.

One person, who described themselves as ‘white British’, felt that sometimes ‘it is easy for black people to play the racist card when perhaps race had nothing to do with it’.

I felt so sad reading this because the whole world had turned upside down a few months earlier because everyone could watch the video of an unresisting, unarmed black man being slowly suffocated to death by a white police officer kneeling on his neck.

One of the early sparks for the first Black Lives Matter upsurge was the 2014 video of another unarmed black man being choked by a police officer and then gasping ‘I can’t breathe’ 11 times as he was pushed into the pavement.

Eric Garner died shortly after being choked. The New York coroner ruled his death a homicide, caused by ‘compression of neck (choke hold), compression of chest and prone positioning during physical restraint by police’.

The person who mentioned ‘the racist card’ in our survey also mentioned the case – in the UK – of a black man with mental health problems who died after being restrained by a police officer. ‘This had nothing to do with the fact that he was black.’

That kind of certainty worries me. It makes me think of the evidence of white people’s unconscious prejudices.

For example, in 2014, the Yale Child Study Centre found that US nursery school teachers were much more likely to focus on black children, especially boys, when asked to look out for challenging behaviour. (They used eye-tracking technology as well as asking teachers who they were keeping an eye on.)

Another study in 2014, at the University of California, found that white people tended to see young black people as on average 4.5 years older than they really were – and less innocent than white or Latinx young people of their (actual) age.

This suggests that black children in the US ‘lose the protection afforded by assumed childhood innocence well before they become adults’, according to one of the study’s authors, Matthew Jackson.

Things are not exactly the same here. However, in the UK, in 2018 – 2019, black students from a Caribbean background had almost twice the England average rate for short-term exclusions from school.

To say this has ‘nothing to do with the fact that they’re black’ flies in the face of the evidence.

Milan Rai is the PN editor