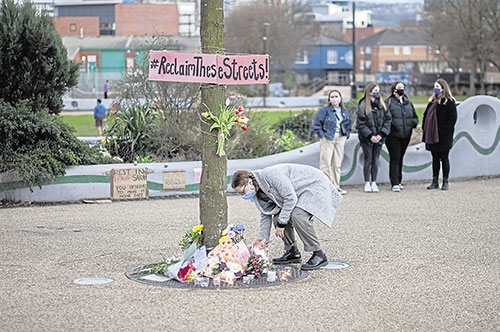 Reclaim These Streets statement on the vigil on Clapham Common

13 March: We and women across the country are deeply saddened and angered by the scenes of police officers physically manhandling women at a vigil against male violence.

From the start, Reclaim These Streets set out to work closely with the Met to ensure this vigil could go ahead safely, so women could stand together peacefully and safely to remember Sarah Everard and all the women lost to male violence.

The Metropolitan police failed to work with us despite the high court ruling yesterday that a vigil could potentially go ahead lawfully. In doing so, they created a risky and unsafe situation. It is their responsibility to protect public order, public health and the right to protest – they failed tonight on all accounts.

All the time spent fighting us on a legal claim that the judge agreed should not have been necessary and was caused by the Metropolitan police’s stance, they could’ve been working with us to ensure the vigil went ahead in a safe way.

The judge was clear and the Metropolitan police conceded minutes before the hearing, that there was no blanket ban on protest under the current law. They then had an opportunity – and a responsibility – to work with us safely and within the law.

This week of all weeks, the police should have understood that women would need a place to mourn, reflect and show solidarity.

Now is the time for the police and the government to recognise that the criminal justice system is failing women.

Tonight, it has failed women again, in the most destructive way.

We will keep fighting for women’s voices to be heard and to matter.