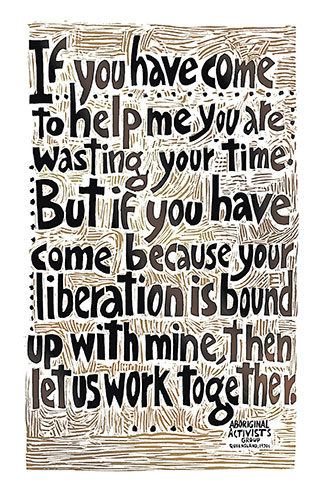 'If you have come here to help me, you are wasting your time.'

I’m writing this as we’re approaching the first anniversary of the killing of George Floyd, and I’m thinking about racism and anti-racism and solidarity.

There’s a thing that a lot of activists call ‘being an ally’ or ‘allyship’. What this means is that you’re not the target of a particular oppression, but you want to challenge that oppression and be actively on the side of people who are the direct targets of that oppression.

So, for example, there was a wave of solidarity feeling last year – in the US and, to an extent, in the UK – among South Asians who wanted to be in solidarity with Black Lives Matter. Many of us recognised that we were not affected by the anti-black racism that targets people of African descent, and we wanted to show that we were on their side.

However, just because you’re not the direct target of a form of oppression doesn’t mean you’re not harmed by it.

For example, as a man, a nontransgender man, I am not the target of sexism. I benefit in lots of ways from sexism in society, the expectations and allowances that men carry. There are burdens that sexism places on women in my life that I don’t have to bear and don’t have to think about.

On the other hand, I can see there are ways that sexism has damaged me as a man, I can see how sexist conditioning often limits me as a person. So, I’m not the target of sexism, but I’m also affected by it.

And that goes for white people and racism as well, coming back to a topic I wrote about a couple of issues ago.

What do you do about that?

Reading books is good, knowing things is good. But, as we all know, there is a difference for white people between being anti-racist to rescue people of colour from ‘the racists’ (other white people, not you) and being anti-racist because the liberation that you want for yourself can only come when we have racial justice.

There is a quote that sums this up: ‘If you have come here to help me, you are wasting your time. But if you have come because your liberation is bound up with mine, then let us work together.’

This quote is attributed to Lilla Watson, an indigenous Australian artist, activist and academic. It is said she used these words at the 1985 United Nations Decade for Women conference in Nairobi, Kenya.

Lilla Watson herself is not comfortable being credited as the sole author of these words. She feels that they came out of a collective process in an Aboriginal rights group that she was part of in the 1970s in Queensland, Australia.

That is what she told Northlands Poster Collective, a radical artists’ co-operative in the US, when they approached her around 1999 about attributing the quote.

Northlands had made the quote into a powerful poster in 1994, attributing the words then to an ‘Aboriginal activist sister’, because that was all that was known in the US then about the speaker of the words.

Around 1999, Northlands finally made contact with Lilla Watson and negotiated with her over a new wording for the attribution. The text that she accepted was: ‘Aboriginal activists group, Queensland, 1970s’, and that is what appears on the 2000 version of the Northlands poster.

Your equality is my equality

Earlier, I said that Lilla Watson ‘used these words’ at the 1985 United Nations Decade for Women conference in Nairobi.

That may not be exactly true.

US activist Stuart Milk heard Lilla Watson give that speech in Nairobi and he remembers it slightly differently to the version that is now internationally famous.

How did Milk end up in Nairobi? He told the story to Brag, a now defunct Australian magazine.

Stuart is the nephew of Harvey Milk, the pioneering US gay rights campaigner who became the first openly gay elected official in the state of California when he was elected as a local councillor in the city of San Francisco in January 1978.

Stuart Milk came out as gay after his uncle was assassinated in November 1978. He was invited to make a speech soon after at an event by a longtime LGBT activist, Frank Kameny. Kameny had some harsh criticisms: ‘he told me I didn’t sound like my uncle and I wasn’t a good speaker’.

Milk says he found this ‘devastating’. He went into the women’s rights movement ‘where the last name Milk didn’t put a spotlight on me immediately’.

That’s how he ended up at the Nairobi UN women’s conference, where he was surprised to find that, despite the event being in Africa, most of the 3,000 participants were white and, in his words, ‘extremely self-important’.

According to Milk: ‘that room became deadly silent and she repeated it.’

She let the silence hang there for a long time.

Then she said: ‘But if you’ve come here because you understand that your liberation is bound with mine, then let us work together.’

Milk went back to the US and co-founded the Harvey Milk Foundation. On its website, the foundation says its volunteers work tirelessly ‘to make global progress, not just for the LGBT community, but for all targets of hate, discrimination and ignorance.’

Stuart Milk says he set a goal that the foundation should spend three-quarters of its time on ‘global support’ – ‘because we are helping ourselves by going to wherever we’re emerging and struggling and reaching out across the globe’. He credits that thinking to hearing Lilla Watson in 1985.

He told Brag magazine: ‘We don’t help anyone. We work with people. It’s almost in a colonial sense, you’re helping someone. No we’re not helping, we’re working with and we work with communities that are marginalised and diminished.’