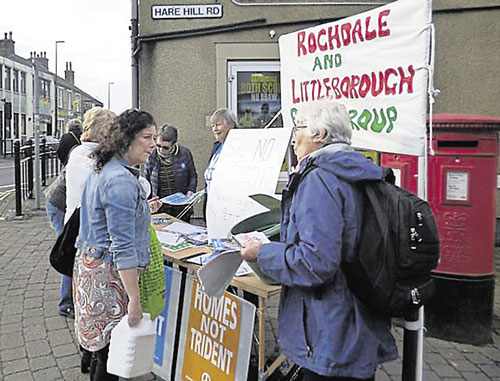 What’s the worst that can happen on a street stall?

Maddie is on a street stall in her town centre on Hiroshima Day, 6 August, wearing a placard and handing out leaflets about the atomic bombings. Every so often, someone stops to argue. Sometimes Maddie can’t get a word in edgeways ...

Passerby: You should be ashamed of yourself.

Passerby: My granddad would have died if we’d listened to people like you.

Maddie: Was he a POW?

Passerby: If we hadn’t used the Bomb, the war would have gone on for months and months and he would never have survived – and there were thousands of soldiers out there like him.

“You never put that quote in your leaflets, do you?”

Maddie: I understand what you’re saying, and I definitely would have wanted your granddad to come home safely, but you do know that 100,000 innocent people were killed in Hiroshima immediately by the atomic bombing, and over 70,000 civilians were killed in Nagasaki three days later – and thousands more have died over the years from the effects of radiation poisoning?

Passerby: My granddad would not have survived if the war had gone on for months and months longer. The Bomb was the only way to end the war quickly. It saved a lot of grief for a lot of people – and it saved my granddad. (Walks away, shaking head, before Maddie can say anything)

Passerby: Your leaflet is historically illiterate, you do know that, you’ve left off crucial context about the Pacific War. You should go home and educate yourself instead of handing out bilge like this.

Passerby: Look at this, you quote the United States Strategic Bombing Survey conclusion that: ‘Japan would have surrendered even if the atomic bombs had not been dropped.’

You can’t use this to argue that the bombing was wrong! This assessment was made after the war was over, with access to information that wasn’t available during the war to the people who had to make the decision to drop the Bomb!

Also, the people who wrote this leaflet don’t tell you that this survey was set up by supporters of the US air force as it was campaigning for a bigger share of US military spending.

What those supporters argued – in the Strategic Bombing Survey – was that, without the atomic bomb, the US air force could have won the war all by themselves.

They wrote: ‘even without the atomic bombing attacks, air supremacy over Japan could have exerted sufficient pressure to bring about unconditional surrender and obviate the need for invasion’.

You never put that quote in your leaflets, do you, because you don’t want people to think about what ‘air supremacy’ meant!

What it meant was the sustained firebombing of Japanese cities big and small – just one raid on 9 March 1945 killed over 100,000 people in Tokyo, that’s more people than died in Hiroshima!

You ignore the firebombing air raids to fit in with your own political agenda!

If the Bomb hadn’t been dropped and the war hadn’t ended so quickly as a result, there would have been more and more incendiary air raids, killing hundreds of thousands more Japanese civilians, the people you claim to care about.

How would that have been morally better that what happened? You can’t answer, can you! (Walks off without giving a chance for Maddie to answer)

Passerby: You idiots go on about Hiroshima, you just want to portray the Japanese as victims!

They weren’t victims, they were imperialists. They were brutal colonialists, conquering countries and treating people despicably.

Have you heard of ‘Unit 731’? Japanese biological and chemical warfare in China? Thousands of people killed in human experimentation, including children, and hundreds of thousands killed throughout China using biological weapons developed by Unit 731. It’s appalling, appalling.

Maddie: I thought Unit 731 scientists were given immunity by the US after the war so that the Pentagon could add the Japanese scientists’ data to their own biological weapons research? Like they did with the Nazi rocket scientists and the US space programme?

Passerby: (pause) It doesn’t matter what the Yanks did later, the point is that, in 1945, Japanese colonialism was killing millions of people throughout Asia. 400,000 Asians and Pacific Islanders were dying every month in territories under Japanese control from starvation, disease and just sheer brutality.

If the war had dragged on for months, into 1946, that would have meant millions more people dying.

Maddie: I do care about those people, I care about all the people who were dying as a result of the war. But you have to admit that the atomic bombings themselves were immoral, the killing of civilians is a war crime.

Passerby: If those so-called ‘immoral’ acts saved the lives of millions of people throughout Asia suffering under the heel of Japanese imperialism, then they were moral! They were very moral! (Stalks off angrily)

The point of these made-up conversations is to show how important it is to be able to answer the argument that ‘the Bomb halted the war against Japan much earlier than otherwise would have been the case’.

We’ve put the strongest versions of that argument we could think of into the mouths of characters who are much more aggressive and much better informed than the average passerby.

(One Yorkshire activist tells PN that a passerby argued that ‘we’d all be under German rule if it weren’t for Hiroshima’!)

As readers of PN will know, there is a wealth of evidence that decision-makers at the time, in mid-1945, knew of alternatives to dropping the atomic bomb that they believed each had a strong chance of bringing about a Japanese surrender.

There were two powerful options.

Firstly, before dropping the Bomb, they could have relaxed the unconditional surrender terms to allow Hirohito to stay on as Japanese emperor (something the US and UK agreed to only after destroying Hiroshima and Nagasaki).

Secondly, before dropping the Bomb, they could have asked the Soviet Union to finally declare war on Japan (which the US also managed to delay until after the atomic bombing of Hiroshima).

The question, we think, is how to turn this kind of information into everyday language that might make sense even to folk with the kind of attitudes and concerns that we’ve shown here.

We’re not going to be able to change those concerns or attitudes quickly, but we may be able to talk to people in a way that is persuasive even so, and we may be able to relay information that helps to shift their judgement about these crucial events.

As part of PN’s 85th anniversary celebrations, he’s leading an online workshop on ‘How to talk about Hiroshima’ from 6pm – 7.30pm, Wednesday 9 June. If you’d like to attend and are able to take part in a Zoom meeting, please fill out this short online questionnaire by 28 May and we will send you a link for the meeting: tinyurl.com/talking-Hiroshima

It’s possible there may be a later audio-only version of this workshop which you can join by telephone. If you would like to be on a waiting list, in case that workshop takes place, please leave your name and number on the Peace News office number: 020 7278 3344.