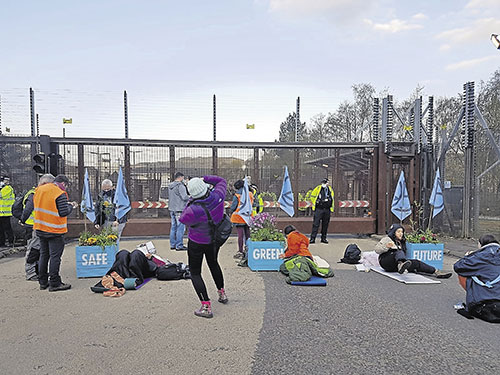 Opposition to nuclear weapons is even greater than support for independence, writes David Mackenzie

Twenty years ago, during a crowded first minister’s question time in the very young Scottish parliament, a group of Trident Ploughshares members dramatically interrupted normal business by dropping a banner and demanding that the parliament face up to the question of the UK’s nuclear weapons and debate it.

They held up business for about 15 minutes before they were removed by police.

The presiding officer, David Steel, was like a headteacher with an unruly assembly.

Following the event, TP wrote to MSPs explaining why we had done it and this led to a really useful dialogue. We pointed out to David Steele that constitutional technicalities were one thing and international humanitarian law was quite another.

Twenty years later, Scotland has voted in a parliament with a majority in favour of Scottish independence.

More than that, we voted in two parties all of whose candidates had undertaken, if elected, to sign the ICAN Parliamentary Pledge to support the Treaty on the Prohibition of Nuclear Weapons (TPNW), plus a number of Labour candidates who did the same.

This means that the majority of the parliament opposed to nuclear weapons is even greater than that for independence.

This is a consolidation of recent progress that has resulted from continual pressure to expand the parliament’s agenda and the autonomy of the government.

If you take a two-decades perspective, the difference is astonishing.

The fact that the Scottish National Party (SNP) does not have an overall majority means that the increased number of Green MSPs (mirroring Green progress elsewhere) can have a progressive effect. The new parliament also has an improved percentage of women MSPs.

And all this in the face of untraceable political funding and dirty tricks on the part of unionists and far right groups. We are acutely aware that the dirty war will continue and intensify.

As we relate to the new parliament, the TPNW will be key to a vision of what a new Scotland can be like, and not just for nuclear weapons.

A new Scotland that accedes to the treaty as an early step will have the backing of international law and support from across the world to rid itself (and probably the UK) of nuclear weapons.

It will also be setting a fundamental marker for how it connects to the rest of the world, with a bias towards relating to peace systems and institutions rather than sectional alliances such as NATO.

There is talk here of ties with the Nordic nations and a return to the EU fold and so there is a job to do in alerting public and parliament to the realities of the NATO tie-ins and arms trade dependency in the former and the increasing military ambitions of the latter.

This will be a tough one, given the views of some senior SNP parliamentarians at both Westminster and Holyrood.

We must also work at continuing to expand the parliament’s agenda on the basis that autonomy is increased by imaginative initiatives.

A good example of how this can be done was the parliamentary debate early in 2020 on the UNSC Resolution 1325 on Women, Peace and Security, following a civil society prompt and support from the emerging project Secure Scotland*, with a view to Scotland developing its own aspirational UNSC Resolution 1325 National Plan.

A key element was in moving beyond party politics to a new non-adversarial approach in uniting a culturally-appropriate response to (in this case) how women are included in the debate.**

Secure Scotland found a champion for this approach in SNP MSP Emma Harper, who skilfully introduced a motion that found favour with all parties, including the Conservatives.

So the current mainstream media message of a divided Scotland has another element that gains less attention despite representing and modelling a glimmer of hope.

One special feature of the election campaign has been the interest shown by journalists outside the UK, very often with well-informed and intelligent questioning, underlining the potential for the Scottish situation to critically affect the future of the UK in general and its nuclear arsenal in particular.

Despite this interest, we have been slow to grasp that the eyes of the world are on us.

As one example of how we can tackle the parochial tendency, we should stop talking about ‘Trident’ and talk instead about ‘the UK’s nuclear weapons’.

The old term traps us in the political ping-pong within the old bubble while the new one sets us in the wider context and in solidarity with the worldwide movement.

And now is the time to reframe all our national responses to the major threats and challenges in ways that will affirm the planetary perspective and worldwide solidarities.

And we have to learn how to tackle the issues in an integrated way. The to-do list (addressing the climate crisis, recovery post-pandemic, just transition, challenging militarism, continuing the push for independence, poverty eradication, exorcising colonialism, etc) cannot be tackled one-after-the-other but must be woven into each other.

In our rich fabric of civil society campaigns and pressure groups, we have to realise that single issues are not single issues and to acknowledge the good work of others.

There is another urgent extension of solidarity that will demand from humans a radical transformation of our sense of our location within everything else.

Perhaps we need to stop talking about ‘nature’ since that term leaves us stuck in the old and calamitous ideology in which we are granted the right to dominate, exploit and destroy. It is all a huge task and it is likely to require at some stage the kind of gentle but disruptive confrontation with which this article began.

David Mackenzie is a retired schoolteacher and a grandparent who does stuff for peace and other precious things.

* Secure Scotland aims to start a new conversation about what keeps us safe. The COVID-19 crisis has itself exposed the limited nature of the exclusive state violence approach to security. Positively, people have again seen their security as utterly dependent on their social bonds, on their basic needs for food, shelter and medical care, and on the workers who provide these services. It is also striking that the popular compliance with COVID-19 rules is largely rooted in an autonomous sense of personal and social responsibility, rather than on external enforcement. www.securescotland.scot

** See the discussion on ‘Women, Peace and Security’ in the Scottish parliament on 8 January 2020:  www.tinyurl.com/peacenews3607