Lisa Fithian, Shut It Down: Stories from a fierce loving resistance 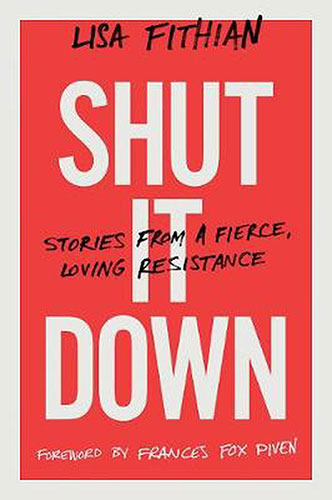 The 2004 Republican National Convention was a tumultuous affair. Hundreds of thousands of protesters took to the streets of New York, and the city’s police department created what some termed a ‘little Guantanamo on the Hudson’.

They converted a block-long pier into a temporary prison to house the hundreds of people – including random members of the public – that they had swept up in mass arrests.

ABC News’ late-night television news programme, Nightline, aired pictures of two dozen people whom the police had named as ‘troublesome, even dangerous, anarchists who infiltrate other groups of demonstrators and then try to provoke violence.’

One of them was the author of this book: Lisa Fithian.

While certainly ‘troublesome’ (in a good sense) and even ‘dangerous’ (to those abusing power and authority), Fithian is a determinedly nonviolent activist, subscribing to the motto: ‘Act as you will but harm none.’

And, boy, has she acted!

Indeed, this book – a blend of manual and memoir – is a virtual activist’s-eye history of the last 30 or so years of US history, by someone who was personally involved in many of its major events, from the April 1987 shut-down of the CIA’s headquarters in Langley (part of the Pledge of Resistance campaign against the US war on Nicaragua) to feminist organising in the Trump era.

A key participant in the Justice for Janitors campaign (on which Ken Loach based his 2000 film, Bread and Roses), Fithian was also active in the Global Justice Movement (arrested during the 1999 Battle of Seattle, she took part in a whole host of other mobilisations, including those in Genoa, Québec, Cancún).

She was also part of the Common Ground Collective (part of the bottom-up, people-powered relief effort in New Orleans, after Hurricane Katrina).

A trainer for the International Solidarity Movement, Fithian took part in the 2009 Gaza Freedom March (which never reached Gaza but ended up almost occupying Tahrir Square).

She helped pave the way for 2011’s Occupy Wall Street protests and was active at Standing Rock in 2016 in the historic direct action protests against the Dakota Access (oil) Pipeline.

Fithian has been shot with a rubber bullet, tear-gassed, and pepper-sprayed.

She is able to draw on a rich mix of different organising and activist traditions, about which she maintains a commendably pluralist perspective.

‘We don’t need to choose between civil disobedience and so-called mainstream tactics like permitted marches’, she writes, ‘We can weave all of these together, making the fabric of our resistance stronger and more beautiful.’

In one highlight, she explains how ‘famous’ or ‘pivotal’ protests often build on lesser-known precursors: ‘When Trump was inaugurated and communities in Austin were faced with an increase in hate crimes, raids, and deportations, we didn’t need to create an anti-racist movement. It was already there.’

It was there because people had spent many years building it.

This book dovetails engaging stories with how-to instructionals on power-mapping, banner-drops, organising a week of action, what to do if you’re planning to risk arrest, and more.

Whether you’re a long-time campaigner or new to activism, you’ll find something to learn from in this vivid and important book.