Patrick Barwise & Peter York, The War Against the BBC 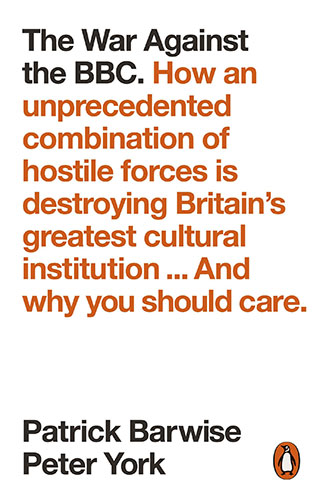 The premise of this book is simple: the BBC is under ‘unprecedented attack’ from a wide range of hostile forces, and the challenges it currently faces may destroy it within a generation.

So, what are these challenges?

Following a brief introduction outlining its role as a public service broadcaster, the authors present a passionate and impressively dense analysis.

The first issue covered is the rise of the US media and tech giants: Facebook, Amazon, Apple, Netflix, Google (the ‘FAANGs’) and Disney Plus. These tax-avoiding corporate behemoths are placing immense pressure on the BBC and other UK broadcasters.

While increasing consumer choice, they are also driving up production costs, which draws vital funds away from programme budgets, which makes it harder to deliver public service remits.

As the authors show, a combination of huge funding cuts (30 percent in real terms between 2009 and 2019), hostile Tory governments and tight regulation (little of which applies to the FAANGs) has left the BBC in an increasingly weak position, with questions mounting over the sustainability of its licence fee.

The authors then turn the spotlight on the BBC’s enemies. These include the usual suspects – the Murdoch press, the Mail, the Express and the Telegraph – who push out a steady stream of ‘Beeb-bashing’ articles.

They also include an assortment of influential right-wing think tanks and pressure groups, such as the Institute for Economic Affairs, New Culture Forum and News-watch.

Many of these think tanks and pressure groups, funded with untraceable money, are dedicated to spreading free market ideas.

In a particularly interesting chapter, it’s revealed how these groups are part of a growing network of lobbyists, websites and YouTube channels that are ‘tirelessly developing arguments to pillory the BBC’.

For these enemies, the BBC is little more than a left-wing melting pot of ‘metropolitan liberal elites’: economically costly and inefficient, and stifling competition and choice.

Drawing from an arsenal of myth-busting data, the authors impressively show how each of these claims is either untrue or misleading.

Reviewing a catalogue of market impact studies they show that the BBC does not in fact stifle competition but actually encourages it.

It drives the take-up of new technology and forces commercial broadcasters to ‘compete on quality’ through innovation and investment in programme-making.

The BBC, in other words, ‘contributes hugely to the UK broadcasting ecology’.

They show how the corporation has made ‘twenty-plus years of relentless efficiency gains’ and is estimated to create ‘two pounds of economic value for every pound of the licence fee’.

Far from being costly and inefficient, the BBC has been found time and again – by independent analysts – to be extremely good value for money.

On the issue of its ideological leanings, the authors concede that, like most creative organisations, the BBC does harbour liberal tendencies.

But, unsurprisingly, when they review the academic empirical research into its news and current affairs, they are led to conclude that it ‘tends to be biased in favour the government of the day, but more so when the Conservatives are in power’.

Barwise and York accept that not everything its critics allege is wrong, however.

They dedicate an entire chapter to analysing what they call the BBC’s ‘biggest mistakes’ (these include Jimmy Savile, salaries, the gender pay gap, racial diversity and multiple failed ventures).

However, while no organisation is perfect, Barwise and York argue that the BBC is ‘exceptionally transparent’ – more so than most commercial organisations and government departments.

It’s hard not to be impressed by the breadth of issues covered in this book.

It is a brilliantly powerful and convincing defence of one of the most important cultural institutions Britain has.

Yet, as Peace News readers appreciate, its somewhat lacklustre presentation of left-wing criticisms is, at times, frustrating.

While the authors acknowledge that attacks are ‘waged overwhelmingly by the right’ and there is ‘nothing comparable on the left’, they end up spending a disproportionate number of pages addressing the easily refutable claims of the Murdoch press and the Daily Mail.

In contrast, other than advocating a long-overdue shift from ‘licence fee’ to ‘household levy’, the book has virtually nothing to say about the very credible and constructive proposals for BBC reform posed by groups like the Media Reform Coalition.

The War Against the BBC also conveniently skirts around the BBC’s propaganda role for UK government foreign policy.

This ultimately renders the book very much an Establishment-friendly defence of the BBC in its current form.

Nevertheless, I am inclined to recommend it to anyone curious about whether the BBC is worth its salt.

There is no other book that makes such a meticulous, comprehensive and accessible rebuttal to the many mythical claims made against it by free-market ideologues and right-wing reactionaries.