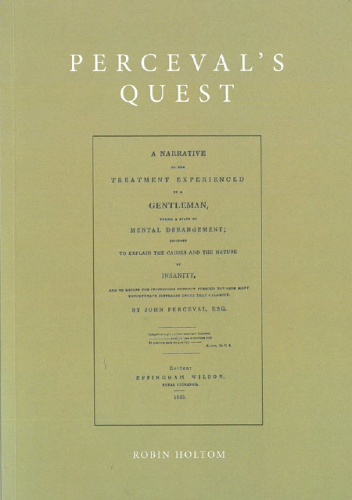 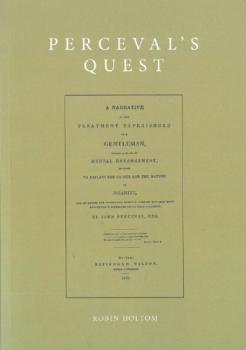 John Perceval, son of the only British prime minister to have been assassinated, was committed to a lunatic asylum in 1830. Perceval’s Quest is an exploration of the circumstances and consequences of that incarceration, using as a basis Perceval’s own fascinating account of his experiences.

At the core of Perceval’s writings are modern concerns about mental health, and how a family and society interacts compassionately with an individual having very different perceptions of reality. Robin Holtom, with his background as an art therapist and his interest in religious experience, is well placed to write this study of early psychiatry.

I was intrigued by this book partly because of my interest in the 1830s as an important decade in shaping today’s world. It was a time of the rise of evangelical and Christianity in Britain; and, relevant for this story, the beginnings of a revival of speaking in tongues. There was a manifestation of this phenomenon in 1830 at, of all places, Gareloch (now home of Trident subs).

It was after Perceval’s visit to Scotland to investigate speaking in tongues that he had his psychotic breakdown and was hospitalised by his family.

As he recovered a new class awareness shaped his political views. Eventually, by marrying the daughter of a cheesemonger, Perceval escaped the legal power of his mother to have him confined.

However the stigma of madness – that age-old attack on political opposition – was used against him. When he began campaigning against the Poor Laws, Perceval’s doctor forwarded the handbills and pamphlets to the home office deeming them ‘calculated to inflame the lower orders’.

This book also tells a story of mad pride. Much of it comes from Perceval’s own frank and perceptive documentation of the experience and distress of hearing voices and his recovery as he reflects on the mental health system of the time. After he was released from the supervision of doctors and escaped the control of his family, he helped to found the Alleged Lunatics Society and campaigned for a reform of the laws on lunacy.

Perceval’s view was: ‘The glory of the old system was coercion by violence. The glory of the modern system is repression by mildness and coaxing and by solitary confinement. But repression is the word and that is to be obtained by any means’

The theology of the apostolic Christian movements is quite complex and I had to read this little book twice to begin to get my head around them. Nonetheless, I think a grounding in this way of thinking helps one to understand a huge swathe of US culture that is remote to most of us here in the UK, a culture of ordinary people who are familiar with gifts, rapture and tongues, a culture that has direct descent from a nineteenth-century British working-class phenomenon.

I look forward to an expanded next edition.

Robin Holtom, 2016; £9; available from The Bookkeeper, 1a Kings Rd, St Leonards-on-Sea, TN37 6EA or from holtom.robin@gmail.com