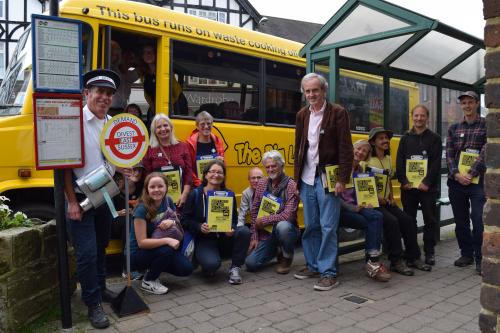 On 23 September, 18 of us went on a bus tour across East Sussex to collect signatures for a petition asking the county council to divest local people’s pensions from fossil fuels. I was a little hazy on the details at first, but by the end I had heard the explanation of what the petition was about so many times that I’m probably still saying it in my sleep.

Equipped with T-shirts (just enough of us were wearing them to make us look cool without looking like we were trying to convert people), badges, clipboards and a fake bus stop and bus conductor’s outfit, we were set to pounce on people from Hastings, Bexhill, Eastbourne and plenty of other places besides.

Admittedly, I didn’t do as much petitioning as some of the others on the bus. There’s something about that ‘No, not interested’ that makes me shudder. A lot of other people seemed to be immune to this. We asked people to sign in town centres, outside shops and, sometimes, even in shops.

Once you know that a person is an East Sussex resident, you have however long their attention span is to explain to them what the petition is about and ‘No, you don’t have to give your address if you don’t want to’. After a while, we learned to add the words ‘We’re not trying to sell you anything!’ to our first question, which might have made a few more people stop and talk to us.

Of course, there were sceptics. One man interrupted the explanation about fossil fuels with ‘I think we should dig up all the fuel gas, of course we should’. Another kept arguing for so long that it was difficult to get rid of him. The favourite argument seemed to be: ‘I’m a scientist/engineer so I know more about climate change than you.’ We met a lot of scientists and engineers.

Overall, though, we got a pretty positive reception, and learnt a few valuable pieces of information: everyone in Eastbourne is a tourist; Uckfield is a ghost town; and, without a local, you might as well give up on finding your way round Crowborough.

Some people signed without even asking what the petition was about, and even those who didn’t want to sign generally agreed to take a leaflet, which surprised us.

Another thing we learnt was that approaching strangers really challenges all the inbuilt prejudices we have: someone really scary-looking turns out to be a very sweet climate change activist; an elderly person with an awful lot of shopping who you think won’t stop turns out to be very interested; and even a Tory councillor will sign. Finally, you should always ask people with dogs. For some reason, they’re more receptive to petitioners.

On the bus back, eating home-made flapjack and listening to the Traveling Wilburys (who?), there was a strong feeling that we had done something really great, and also that Bexhill is, surprisingly, the hotspot for climate change petitioners and that we should definitely go back there.

For my part, I felt like the whole fun, tiring day had been something I would look back on and be proud of. I don’t know how many signatures we got, but I have a feeling it was lots. [It was 641 – ed]