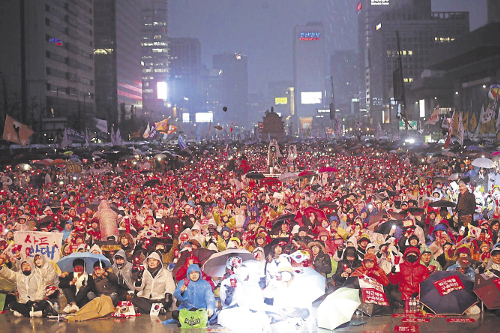 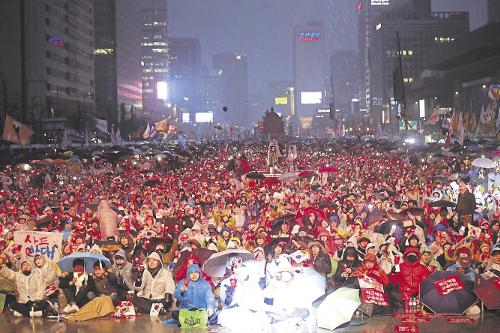 In the past, North Korea has offered to freeze its nuclear weapons programme in exchange for a significant reduction in joint US-South Korean military exercises such as the massive Ulchi-Freedom Guardian (UFG) exercises. This proposal was repeatedly turned down by the Obama administration and has also been rejected by the Trump administration.

In August, UFG took place despite domestic and international opposition and in the midst of spiralling tensions with North Korea, which threatened to fire missiles into waters near the US Pacific territory of Guam. Korean peace activist Jun described it as an ‘extremely dangerous situation one step ahead from a verbal war to actual war’.

The UFG land, sea and air exercises involve 17,500 US armed forces personnel and 50,000 South Korean troops. US and South Korean officials claim that the war exercises serve as a deterrent against North Korean aggression. However, many South Koreans fear that these war games could dangerously escalate the situation and lead to renewed fighting on the Korean peninsula, this time involving nuclear weapons with catastrophic consequences.

The above is the belief of the People’s Democracy Party (PDP) of South Korea, a small movement founded in November 2016 during a period of peaceful mass candlelit protests against South Korea’s then-president Park Geun-Hye. She was impeached on corruption charges in December 2016. The PDP opposes the militarisation of South Korea, demanding a lasting peaceful resolution to the conflict with North Korea, and works, ultimately, for a peaceful, democratic and independent reunification of Korea.

“The use of candlelit protests traces back to 2002, when two schoolgirls were run over and killed by US armoured vehicles”

In April 2017, a PDP peace delegation visited the London Catholic Worker community (where I live) and other UK peace groups. During their visit, they demonstrated in front of the US embassy and at military bases at Menwith Hill, Croughton and Faslane. They were protesting against joint US-South Korea military exercises and the deployment of the US THAAD missile defence system in South Korea, and called for a US-North Korea peace treaty. In August, a second PDP peace expedition to the UK took place during the annual UFG military exercises. The group opposed these war games and called for an immediate withdrawal of THAAD.

This article is based on an interview I carried out with Jun, one of the leaders of the peace delegation.

In English, the PDP refers to its country as ‘Corea’ to express its hope for what Jun calls ‘complete independence, democracy and reunification without any foreign forces’. Some academics and Korean politicians claim that the English-language name of Korea was changed from the original ‘Corea’ during Japanese colonial rule so that it would not precede Japan in the English alphabet.

On 26 April, a ‘terminal high altitude area defence’ (THAAD) missile defence system was installed in Seonju City in South Korea despite growing local and national protests. The official objective of THAAD, as with the military exercises, is to protect South Korea from an attack by North Korea. However, the defence system is stationed 135 miles south of Seoul, meaning that 25 million Koreans living in the area in and around the capital city (half of the country’s entire population) would not be protected in the event of a missile attack. Furthermore, it has been argued that there is no evidence that THAAD is effective under live fire conditions if multiple missiles and decoys are used.

However, THAAD’s radar system is capable of monitoring missile systems in China.This has led some anti-war activists and political groups, including the PDP, to suspect this to be the US’s main objective for stationing THAAD in South Korea. China has voiced strong opposition to the deployment of THAAD, responding with economic sanctions against South Korea and threatening a new arms race.

South Koreans not only fear that THAAD will further escalate tensions with North Korea and strain South Korea’s relationship with China, but also strengthen the position of domestic authoritarian and militaristic political forces.

According to Jun, there is growing mass opposition in South Korea to militarisation and a corrupt and authoritarian political leadership. South Korea has a long history of mass political mobilisation driving democratic reforms. The use of candlelit protests can be traced back to 2002, when two schoolgirls were run over and killed by US armoured vehicles during training exercises near a US military base. After the US soldiers responsible were acquitted by a US court martial, thousands gathered in Seoul to hold a candelit protest commemorating the victims. Since then, candlelit protests have become the symbol of an inclusive, nonviolent mass movement for peace and democracy in South Korea.

In recent years, hundreds of thousands of protesters have participated in repeated candlelit protests in response to a corruption scandal involving impeached president Park Geun-Hye (see picture) as well as the 2014 Sewol ferry disaster. The Sewol ferry was heading from Incheon to Jeju Island carrying 476 passengers and crew when it suddenly listed and capsized, killing 304 people, many of whom were schoolchildren.

Public criticism focused on negligence by the crew and rescue teams, as well as president Park Geun-Hye who did not appear in public for seven hours after the ferry started sinking. According to Jun: ‘Rational doubts have been raised that the cause of disaster sunken Sewol Ferry in 2014 was colliding with a US submarine involved in Joint Military Exercises called Key Resolve.’ The PDP have called for further investigations into the causes of the disaster.

The PDP demands that the current president Moon Jae-in, who was elected as a result of mass candlelit protests in 2016 and 2017, immediately stop further militarisation and war games to reflect growing anti-war sentiment in South Korea. A peace treaty should be negotiated between the USA and North Korea to open up a way towards peace and, ultimately, reunification.

Organisations in the US and UK are also calling for a peaceful resolution to the conflict with North Korea.

In July, an international Solidarity Peace Delegation travelled to South Korea calling upon the governments of the USA and South Korea to withdraw THAAD, end joint military exercises, engage in diplomacy with North Korea and support all efforts of the Korean people to achieve peaceful reunification. The delegation was part of a coalition of US-based organisations called ‘Stop THAAD in Korea and Militarism in Asia and the Pacific’ and has been supported, among many others, by the Campaign for Nuclear Disarmament and Veterans for Peace UK.

Nora Ziegler is a member of London Catholic Worker.