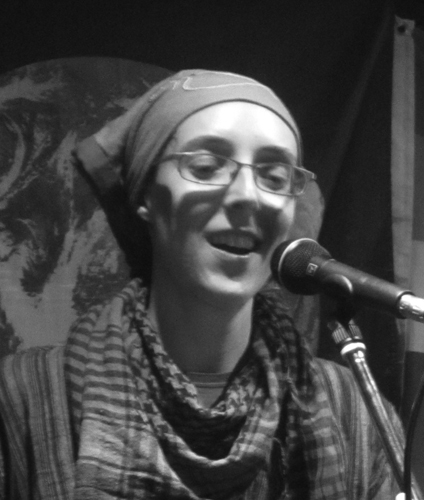 'In such extreme realities what can we offer but solidarity and song?'

When my choir San Ghanny (‘We Shall Sing’ in Arabic) and I were in Palestine two months ago, we took part in a demonstration to call for the return of Palestinian bodies from the Israeli government.

The campaign is led by family members, often mothers, of Palestinians who have been killed by Israeli forces, or who have been involved in militarised resistance to the occupation resulting in their own deaths. This includes desperate actions such as suicide bombing.

For family members, the most difficult part of this is coming to terms with the actual death of their loved ones. How do you begin to grieve when the proof of the death is missing?

How do you grieve when those who occupy your land are holding the body in some kind of political ransom that you have no way to pay?

We went to join this demonstration in the city of Bethlehem as people gathered to march up the main road towards Jerusalem, where the Israeli apartheid wall has been built to block what used to be the main road between the two cities.

We spoke with Azhar, the mother of one of the young men whose bodies have not been returned. She spoke to us about the difficulty of beginning to process his death, how unreal it feels. She spoke about having to campaign instead of grieve, about being on ‘pause’ until some kind of resolution can be found. She finds it hard to realise that her son is actually dead, though he has been gone for many months now.

Azhar described her teenage son as the ‘salt of the house’ meaning that he brought flavour to their home. He was clever at school and they expected him to go on and continue studying. Then one day he left the house and never came back.

He went out and blew up an Israeli bus, killing himself and injuring 20 people. His family never saw it coming.

A few months before, his cousin had been shot and killed by Israeli soldiers. The family wonder if this is what tipped him over the edge, but they will never know. And still they can’t really begin to process what happened until they can bury their son.

In such extreme realities, what can we offer but solidarity and songs? We marched alongside the Palestinians and, as we approached the wall, we began to sing. We stood with our backs to the wall and sang songs of freedom and solidarity and Azhar came and stood with us, starting to sing ‘We stand with you’ and ‘We shall overcome’ as we sung the verses in Arabic.

Another woman, Ahlem (her name meaning ‘dreams’) came to stand in the middle of the choir with us, delighted that we had come to support them all the way from Scotland, and amazed that we could all sing together so easily. Both women were strengthened by our solidarity, and particularly by the singing that we were able to share.

Despite our obvious nonviolent action, the Israeli soldiers on the other side of the wall threw sound bombs at us, injuring a young Palestinian journalist in the leg with one of the thick rubber missiles the size of grapefruits that shatter on impact with the ground, and do more damage when they hit human flesh.

As the demonstration was dispersing, the soldiers came racing down the street in armoured vehicles and threw tear gas at demonstrators’ backs. We had to seek shelter in a nearby hotel who kindly let us in, even though they had had to lock their doors and shutter their windows against the gas.

This is the kind of everyday ‘low-level’ violence perpetuated by Israel upon the people of Palestine, and it is the kind of provocation that makes nonviolent activists in Palestine so extraordinary.

Speaking to Ahlem later, we discovered that she had been imprisoned by Israel for many years during her youth, and the lack of access to medical services left her with permanent damage, including partial blindness.

Hugging me tight after the demonstration, she said that she felt strengthened by singing with us, and more able to keep on resisting the occupation. This is a small part of the power of using singing where there is violence.