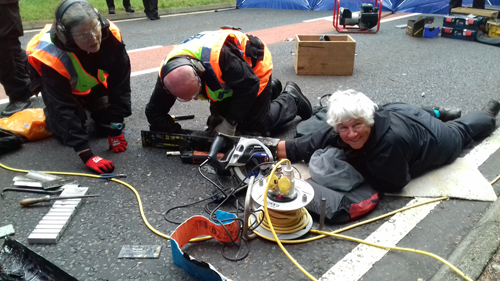 Nikki No-Nukes on her recent trip to Coulport, where the nuclear warheads for Trident submarines are stored and loaded onto missiles. 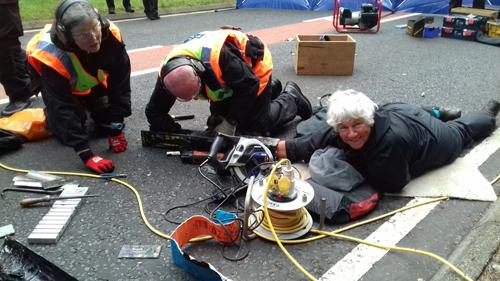 Angie Zelter is cut out of a lock-on in front of Coulport nuclear weapon store in Scotland on 11 July. Photo: Trident Ploughshares

Thursday: We (a contingent from the south-west of England) arrived at the Trident Ploughshares Coulport Disarmament Camp late at night, having travelled straight from an action which was part of the July rolling blockade at the fracking front line: Preston New Road in Lancashire. We arrived tired but exhilarated having kept the drills at bay for nearly 15 hours!

Then came the news that the UN Treaty to Ban Nuclear weapons had been adopted! There was an amazing buzz on the camp. The news reinforced the importance of our disarmament camp, and gave us renewed optimism that we will eliminate nuclear weapons.

I felt shame that those who represent our country refused to take part in the negotiations, but also joy that so many countries are united about this issue. I also felt relief that the world seems to have taken a step in the right direction.

Saturday: A small group of four or five of us wrote a protest song about the newly-adopted nuclear weapons ban. I’ve never written a song before so it was a curious and most enjoyable process – very different to the article-writing that I’m more used to!

Sunday: We performed the new song we’d written at the gates of the Faslane Trident submarine base with members of the Rise Up Singing affinity group, who were also there to celebrate the signing of the nuclear weapons ban. This was fun! I never consider myself to be able to sing so it was great to have a try. I felt proud to have been a part of writing the song – one of the highlights of the camp for me.

Afterwards, as the weather turned to rain, I helped in the kitchen for a bit, and then I gave a workshop on nuclear waste dumping and an update on Hinkley nuclear power station, being built in Somerset.

I experienced all of the usual pre-workshop feelings of anxiety. Will anybody come? Will I remember all the things I need to say? How will people respond to such heavy subject matter with no happy endings? But I was able to let go as I shared with others the experience of concern and grief for our planet, and a desire to protect the earth for future generations.

Monday: As with every day, there was an early morning vigil at the gates of Coulport to remind those working at the base about our continued opposition to the immoral (and soon to be illegal) goings-on there. Much plotting, planning and training took place as people prepared to take disarmament action against Trident. I felt excited about what actions might happen and how they might affect the discourse around nuclear weapons.

The weather was better today and there was even some music and communal dancing around the fire in the evening!

Tuesday: Five of my friends new and old, were arrested for blockading the gates of Coulport early on Tuesday morning. All were offered the option of signing an ‘undertaking’ not to return to within 100m of the base. They all declined and so were held over for court the next day.

Wednesday: As me and my partner began the long journey home, I felt sad to leave. Those arrested were due in court at 12noon in Dumbarton. As we travelled, we received news [see p4] that two had been jailed for refusing to accept the bail conditions of not venturing within 100m of the Coulport base. The other three were released.

I felt great admiration yet again at the bravery of those willing to go to jail to disarm Trident. The threat that nuclear weapons pose is an existential threat to all of humanity. As I travelled home I reflected on whether I could be brave enough to take that step – to go to prison to force the discussion on nuclear weapons.