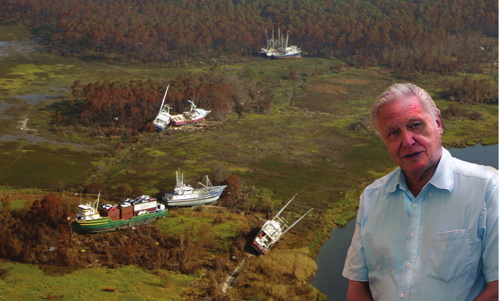 With the ever-cumulative emissions growing, a climate activist envisions the world two years from now and the lessons that tomorrow can teach today 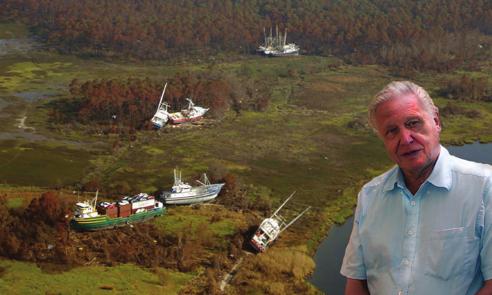 The Indian heatwave saw thermometers bump up to 48 degrees on four occasions during a two week period.

The power system buckled, and only those who could afford generators could afford air-conditioning. Pictures of overflowing mortuaries – stuffed with the old, the young, the poor – and mass graves in major cities around the subcontinent were beamed around the world. Social media hashtags proliferated, and protest events about Western indifference and the slowness of relief efforts were held in cities with significant Indian populations around the globe.

Just as that was becoming old news, a pall of smog hung over China’s capital (that’s what you get when you melt the Arctic). Millions of middle-class Chinese people, fearful for the health of their child (or more rarely children), were not fooled by official declarations that – after four days of warnings to stay indoors – that it had suddenly become safe to go outside. The twitter feed of the monitoring equipment on the roof of the US embassy in Beijing was endlessly reshared and reposted.

The 50 cent army failed to distract people, and the real army was on standby, and but nobody quite knew if it would, or could be called upon to repeat its show of force of 1989. Meanwhile, in Russia, in an eerie repeat of 2010, fires surrounded Moscow, and wheat exports were again banned. Globally, food prices surged, with devastating impacts on the poorest.

Closer to home, a freak tidal surge hit Norfolk, leaving eight dead and thousands homeless. (Sadly European Union reconstruction funds were not going to be available). Although the surge had nothing to do with the other events, it added to the growing sense of panic and despair.

In response to that disaster, the prime minister exuded gravitas, flew over the damaged areas in a helicopter and said all the right words. This backfired spectacularly when a conversation about climate change activists being opportunistic luddites and crazies leaked to the media, thanks to a microphone being
left on.

All that was bad. But ‘shit got real’ when David Attenborough did everyone a huge favour.
He died. And then the video turned up.

He’d made it at some point in 2017, when he knew that the end was near. It was short, sharp, beautifully made, of course. In it, over a montage of his documentaries, he delivered a simple, powerful message in his inimitable and adored voice, which was at times frail, but always clear. He asked anyone who had enjoyed his documentaries (and that was pretty much every man woman and child in the UK, let alone the rest of the world) to start taking climate change seriously.

The video almost broke the internet. It was reposted, tweeted, shared, mashed-up, translated, beamed against parliament buildings everywhere. It took off in a way that left even social media ‘experts’ speechless. Efforts by climate deniers to point to Attenborough’s lifetime carbon footprint elicited ridicule and contempt.

The rest of this article is about what happened next, and how the environment movement blew it again, for the last time. There are some words about ‘what we could have done differently’ at the end, but my heart isn’t in it. This is only going to play out one way.

The responses of states were the standard, and not always subtle, mix of soothing blandishments, co-optation and repression. New taskforces sprang up, inquiries were promised, ministers reshuffled. Meetings of serious-sounding acronym groups (COBRA, anyone?) were held. Action (as yet unspecified) would be taken. International gatherings were scheduled, made up of chief scientific advisors and stern-faced ministers. Loose talk about geo-engineering as a regrettable necessity started to get picked up by the news media, which was in an economic death-spiral of its own. Penalties for ‘interfering’ with ‘critical national infrastructure’ were given a quiet boost.

Local authorities and city governments pointed to various token climate strategies that were adopted during the last upsurge in 2008–2010, and then left to rot. They hosted tedious self-congratulatory and defensive top-down meetings, and invited various tamable movement ‘leaders’ to be part of ‘environmental advisory panels’, while shifting the blame and attention to the national government, and shifting the topic from impending ecological debacle to the safer ground of rubbish collection and potholes.

Meanwhile, there was the inevitable spying/data collection on potential ‘trouble-makers.’

The corporate sector called upon governments to ‘set the policy framework’ (never mind that they had diligently undermined all previous attempts). We cannot damage the profitability of our own company/industry they would say, since jobs would merely be exported to countries with less stringent standards.

Old front groups were dusted off and rebooted, new ones formed. Advertising campaigns showed branded bottled water being dropped on parched and suitably grateful Indians. Earth Hour was rebooted, and turned from an annual ‘event’ into a monthly one.

“Anxious and guilt-ridden consumers suddenly had dozens of feel-good, ‘do-your-bit-for-nature’ products to choose from.”

Anxious and guilt-ridden consumers suddenly had dozens of feel-good/’do-your-bit-for-nature’ products to choose from, and books, websites, glossy newspaper supplements and gurus to tell them how to shop for a better planet.

CEOs bought up more land in New Zealand, and worried about how to get to it when it all suddenly went horribly wrong.

Meanwhile, there was the inevitable spying/data collection on potential ‘trouble-makers.’

Academics wrote papers about the socio-technical transitions, the Anthropocene, capitolocene and cthlulocene,which were read by literally dozens of ordinary people all around the world.

The bank accounts of the think tanks and industry trade associations swelled in synchronicity with the Indian graves, and their well-drilled drones filled the screens and airwaves, explaining that if anything was to be done, it could only be done on market principles.

The big movement organisations could barely believe their luck. Their coffers full, they would hire lots of ‘campaign organisers’ and tussle over who would dominate a new umbrella organisation ‘Stop Saying Yes to Climate Chaos’.

They held big meetings around the country, each a panel with a scientist, a politician and a celebrity, all based on the ‘information deficit model,’ with sages on the stage stoking fears. Attendees were urged to give their emails and money. The misnamed ‘question and answer’ sessions which followed these talks weredominated by those most anxious and most ‘knowledgeable’. Numbers were great, but follow-up meetings were ever-more sparsely attended.

“After the pulse of activity died, many activists turned at each other, in love, in fear, in hate, in tears, in sympathy....”

Marches were planned and held, with the specific of David Attenborough’s plea that people take action locally lost in the more familiar ‘we must show world leaders that we care’ message. Papers were sold. Protesters were pepper-sprayed. Splits, hidden in the first honeymoon months, emerged, between the ‘Change the System from Withins’ and the ‘Global Revolution Nows’. Groups fought for their part of the global problem to be top of the shopping list of demands.

Some activists stormed runways and power stations, and were jailed for their sins. This, combined with well-placed articles and websites gently reminding activists that the last time direct action had been tried, the movement was riddled with well-placed deep cover spies, helped keep radical action to a minimum. Who wants to run a very high risk of serious jail time when there might only be a few ‘good years’ left?

And nine months later, all that energy and concern? Gone like a fist when you open your palm.

Why was it so?

The social movements had dreamt of this ‘wake-up’ moment, but they had never bothered to prepare for it. The skills required – the ability to retain new members, to broaden out beyond stale but comforting repertoires of meetings, marches and the ‘emotacycle,’ to acquire new skills and make sure there were no single-points of failure – were never selected for, in the Darwinian sense. Social movements had low expectations, and were able to avoid awkward questions about their ‘absorptive capacity’.

So when the moment came, when the great ‘awakening’ happened, these organisations were simply not able to retain the hordes of people who came to them, were not able to co-ordinate with other groups to provoke a long-term, sustained pressure building, not able to counter the tried and tested methods that the state and corporate actors had at their disposal.

In their own defence, the movement organisations pointed out that this wave of concern about global apocalypse had been different from the previous ones, from 1970 to 1973, 1988 to 1992, and 2006 to 2009. In each of those cases, scientists could be found who would say: ‘If we act now, things will be okay’. By 2019, that had morphed into: ‘If we act now, and we are really lucky, then we may avoid the very nastiest of the impacts.’ Hope was in short supply.

But after the pulse of activity died, many activists turned at each other, in love, in fear, in hate, in tears, in sympathy and said: ‘That’s it. There’s no point anymore.’

No, really, my heart’s not in it

So, that heart-not-in-it thing; what would need to be done differently?

Well, first, get a time machine….

Second, think maybe about running this above as a scenario planning exercise for your group. Not because it will unfold like this – of course it bloody won’t, but scenarios are not predictions, they are thinking and doing tools. What ways is your group likely to fail? What can you do to lessen the likelihood of that particular kind of failure now?

Third, from this as a planning exercise, think about how many skills today’s activists need in terms of meeting design, facilitation, keeping ‘newbies’ and returnees, maintaining connections and everyone’s morale, identifying the skills and knowledge that exist in a group (and its bottlenecks) and how to plug those, choosing winnable targets, and figuring out how to not be bought off, ploughed under or burn out.

Or you could just shut it all out and follow the Cocker Protocol: ‘Dance and drink and screw because there’s nothing else to do.’